🇯🇪 Jersey Post has announced 2 new issues for June. A charming set of 6 stamps and 1 miniature sheet will be issued on 14 June 2017 to commemorate the 25th anniversary of the Darwin Initiative which is a United Kingdom grants scheme that helps to protect biodiversity and the natural environment through locally based projects worldwide and which is partnered with Gerald Durrell's Jersey Wildlife Conservation Trust. The issue highlights projects which have been undertaken by Durrell and feature six species which have benefited from his work. The miniature sheet stamp depicts Charles Darwin.
The designs are from illustrations by Sara Menon and printing was by Cartor. The stamps are gummed but the miniature sheet is self-adhesive. This is a very attractive set and highlights a subject of local importance in Jersey. Rating:- *****.

The Darwin/Durrell issue is preceded by a set of 6 stamps and 1 miniature sheet which are to be released on 7 June 2017 and which commemorates the Centenary of Lions Clubs International. It's a pleasant enough set and was designed by So Design Consultants and lithographed by Lowe-Martin. Rating:- ***. 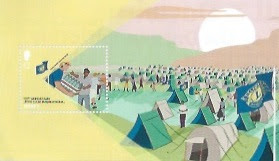 🇦🇺 Australia Post is planning to release a very large number of issues over the next couple of months and there seems very little reason for it to do so in most cases apart from the obvious reason which is financial gain.
The first is on the subject of "Caves" and is due for release on 2 May 2017. The issue is made up of basic stamps (total face value $7), a $20 booklet of 20 x $1 self-adhesive stamps in 2 different designs (plus a $400 "chequebook" of 20 x 20 self-adhesive stamps) and a strip of 2 different $1 stamps sold in self-adhesive coils of 100. The issue was designed by Jo Mure and lithographed by RA Printing and perforated 14 x 14.5. Rating:- *.

On 16 May 2017 an issue on the subject of Street art will be released which is made up of 4 basic gummed stamps, a gummed miniature and a $10 booklet of 10 x $1 self-adhesive stamps. Oh yes, there's a "chequebook" of 20 x 10 x $1 stamps costing $200. The issue was designed by John White and lithographed by EGO and perforated 14.5 x 14. The designs include some interesting and attractive art but placed in the context of the philatelic overload Australia Post has allowed to get itself into, the Rating is:- *. 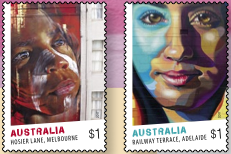 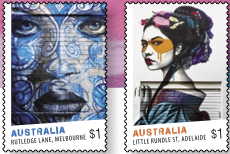 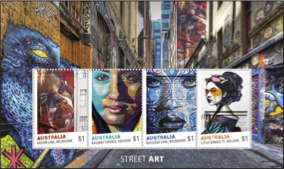 A single gummed $1 stamp produced in sheetlets of 10 will be issued on 24 May to commemorate the 50th anniversary of a constitutional referendum in Australia which affected the rights of indigenous peoples. The stamp was designed by Rachael Sarra Gilimbaa and lithographed by RA Printing and perforated 14.5 x 14. This is a significant anniversary in Australia's modern history and though the design is not particularly attractive the stamp is quite interesting. Rating:- ***.

Another single stamp will be issued on 7 June 2017 to commemorate the Centenary of Lions Clubs International. This issue will be released in gummed form and in self-adhesive form from $20 booklets of 20 x $1 (plus $400 "chequebooks" of 20 x 20 x $1). The stamp was designed by Lynda Warner and lithographed by RA Printing and perforated 14 x 14.5. Rating:- *. 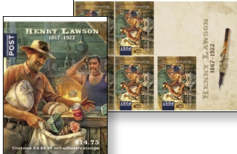 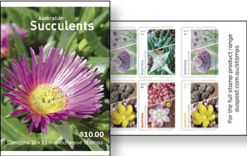 Australia Post will also release its annual "Australian Legends" set on 29 May 2017 but details of the issue have not yet been released. If the past is anything to go by these will result in a large number of new stamps with gummed and self-adhesive versions. We await the details of this issue with bated breath.
🇦🇺🇨🇨 But that's not all. Australia Post will also issue 4 stamps and 1 miniature sheet inscribed "Cocos (Keeling) Islands Australia" on the subject of "Garden fruits of Cocos". This issue is scheduled for release on 30 May 2017 and was designed by Anita Xhafer and lithographed by EGO and perforated 14 x 14.5. Rating:- ***.