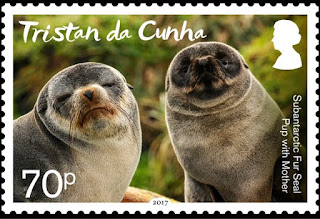 🇸🇭 Penguins and baby seals - the territories which are clients of Creative Direction/Pobjoy Stamps have just about the most appealing subjects to be featured on postage stamps that any stamp designer could wish for. The only subjects missing are Labrador puppies.
Creative Direction makes great use of these wonderful subjects time and time again by presenting collectors with some splendid, perfectly chosen photographs placed absolutely ideally on the stamp designs it produces and giving great delight at a reasonable price to collectors worldwide who buy them.
The latest wonderful such set will be issued by the Tristan Da Cunha postal service on 12 April 2017 on the subject of Subantarctic fur seals. Who can resist adding them to their collection? The stamps were designed by Bee Design using photographs by Mia Wege and lithographed by Lowe-Martin Group and perforated 13. Rating:- ****** (six stars!).
Thanks to Juliet Warner for information about this and other issues.
Perhaps Creative Direction could find an excuse to issue a set featuring labrador puppies for one of its lucky client territories. Perhaps there's a Port Stanley dog show or duck hunting in South Georgia. Just imagine how appealing a set of 6 stamps featuring Labrador puppies could be! 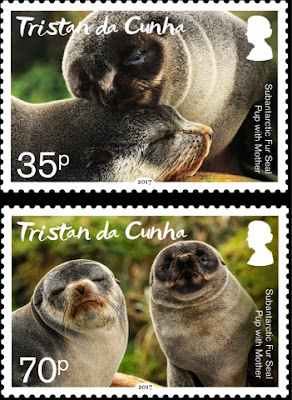 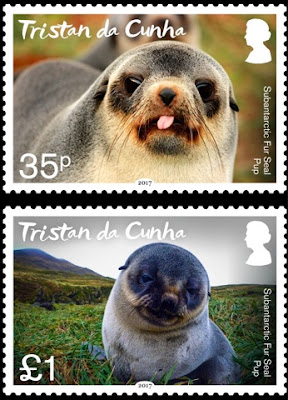 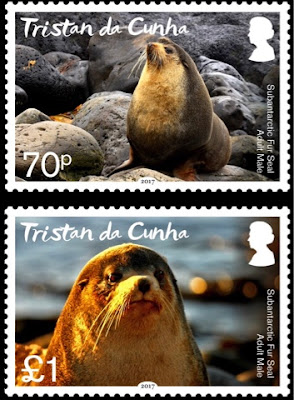 🇬🇧 Royal Mail's latest Post and Go issues include two new stamps from IAR kiosk A009 situated in the Shakespeare Birthplace Trust gift shop in Stratford upon Avon in the form of the "Union Jack" and "Machin Head" labels with additional inscriptions applied. The original announcement for this issue which was released on 20 March 2017 stated that overprint would commemorate "Schools week" but the inscription actually reads "Shakespeare Week" in irregular thick capital letters. The "Machin Head" stamps have code MA13.
This inscription will be applied until 21 April 2017 when, I presume, it will be replaced by a new inscription to coincide with Shakespeare's 453rd birthday on 23 April.

The A005 kiosk was installed at East Anglian Railway Museum on 20 March 2017 and is dispensing 2 types of labels - the "Travelling Post Office, 1890s" and Machin Head" - with the additional inscription "EARM".

Yet another British museum has been adding to the growing list of "Post and Go" issues released under the auspices of Royal Mail so far in 2017. The STEAM GW Museum kiosk A010 has been kept busy by dispensing "Mail By Rail" labels - all 6 designs - with the museum logo inscribed on them as well as strips of the "Travelling Post Office, 1890s" design also with the museum logo inscribed on them. These were sold from 20 February.

🇸🇬 Singapore Post issued its machine vended stamp series in a new design on 20 March 2017. The subject of the issue is the "Singapore Skyline" and the view depicted on the stamp is certainly spectacular. This issue replaces the design which was introduced on 14 August 2015 to commemorate Singapore's Golden Jubilee anniversary, also depicted below:- 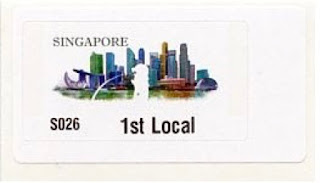 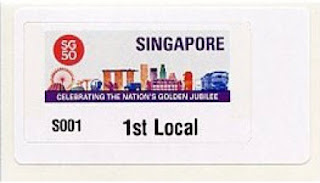