592. Philatelic Collector Inc. Cashes In On Royal Birth; A Visit To A Recently Made Acquaintance.

The latest list of philatelic products to be put out by the U S-based agency, Philatelic Collector Inc., cashes in on the recent birth of Princess Charlotte of Cambridge. I have not yet seen the date of issue of any of this material. We may note that both Samoa and Tonga are not territories which are ruled by Queen Elizabeth II and the relevance of the British royal family to them is therefore questionable especially when the issue commemorates the birth of the fourth in line to the thrones of The United Kingdom and the other Royal Realms. Even more questionable is the fact that Tonga and Niuafo'ou have had items issued on their behalf which commemorate births in the British royal family but have made no stamp issues to commemorate any recent births in the Tongan royal family (see Blog 403).
These items are attractive and will no doubt be quite popular with collectors of philatelic items which depict the British royal family as well as members of the public who are looking for a souvenir of the royal birth but for the reasons given in the first paragraph I shall not be adding them to my collection:- 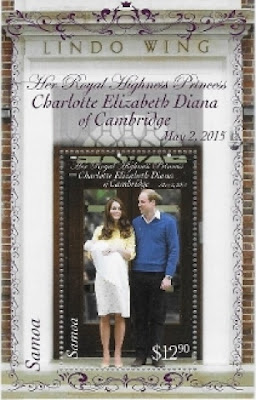 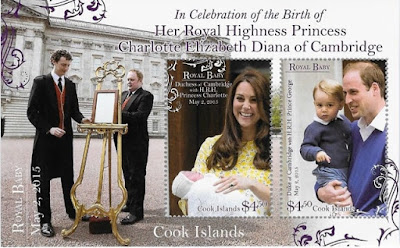 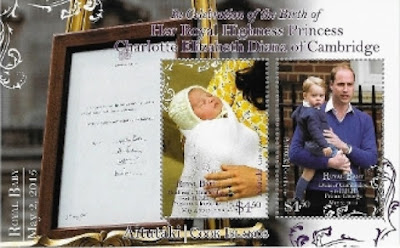 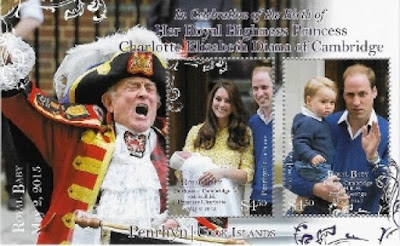 Tonga and Niuafo'ou - a total of 2 miniature sheets:- 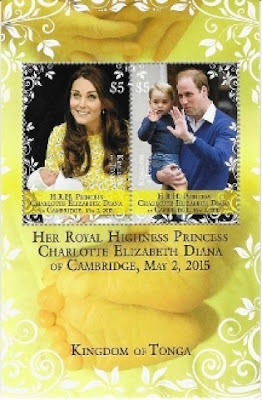 On a recent trip to London to go to see "King John", he of numerous recent philatelic depictions, at The Globe Theatre, I took the opportunity to drop in on a friend whose acquaintance I first made a few weeks ago.
I took a short detour to Gibraltar House in The Strand to take a look at the Intelligent AR Post And Go kiosk, GI01 (see Blog 570) which has been situated in the front room of the Offices of the Gibraltar government in London and, as much as I find the excessive numbers of Post And Go stamps being released to be annoying, I felt I could justify buying a Collector's Strip of the Royal Mail Union Jack stamps with "Gibraltar House" inscription simply because it is an interesting item - British stamps sold  on "foreign territory" for a prolonged period unlike those sold at philatelic exhibitions where sales continue for a matter of a mere few days only.
I also bought a Collector's strip of the Gibraltar Flag stamps since these are the first and only Gibraltar Post And Go stamps to be dispensed to the public from a Post And Go kiosk actually situated on Gibraltar territory. I was able to experience obtaining Gibraltar Post And Go stamps from a kiosk unlike most citizens of Gibraltar who are currently unable to do so because there is no Post And Go kiosk to be found anywhere on The Rock itself.
As described in Blog 570, I had first met Kiosk GI01 at the Europhilex Stamp Exhibition and I feel that we are now building up a friendly relationship of mutual understanding as long as dear old GI01 does not continue to produce new inscriptions every few weeks. And perhaps one day GI01 might even find itself transported to Gibraltar itself, the place it likes to call home!