Canada Post has revealed its upcoming new issues for late June and July 2015. They are as follows:-

18 June 2015 - "Weather Wonders" - a set of 5 self-adhesive stamps from booklets of ten and 1 accompanying gummed miniature sheet. The issue was designed by Kosta Tsetsekas and Defna Corbacioglu (Signals) and lithographed by Canadian Bank Note:- 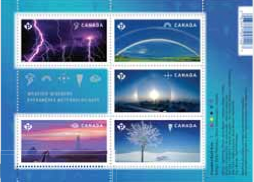 3 July 2015 - UNESCO World Heritage Sites in Canada -  5 self-adhesive stamps - 3 designs ($1.20c) issued in a booklet of six and 2 designs ($ 2.50c) also issued in booklets of six with an accompanying gummed miniature sheet. The designer was Lara Minja (Lime Design) and the issue was lithographed by Lowe-Martin):- 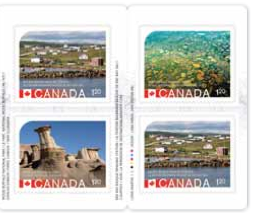 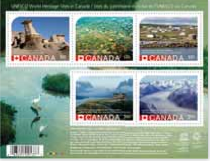 On the subject of literature, while on a recent visit to Stratford upon Avon, birthplace of England's greatest writer, William Shakespeare, I was able to take the opportunity to photograph the plaque which Royal Mail fixed recently to one of the post boxes in the town and which features the stamp issued in 2006 which depicts a portrait of The Bard in the National Portrait Gallery. The post box is situated at the end of Henley Street, about 40 to 50 yards from the house in which Shakespeare was born. The plaque looks very appropriate in its situation - now let's hope that Royal Mail will issue stamps next year to commemorate the 400th anniversary of Shakespeare's death so that tourists can use the stamps on their postcards to home and post them in this now special postbox.
Better still, why not reprint the 2006 stamp in the overseas postcard rate for long-term sale so that the many visitors to Stratford from abroad could use it and put a portrait of Shakespeare on their postcards - perhaps a 6 value counter booklet would be convenient for tourists to buy - it might even encourage them to send postcards if they have a special souvenir stamp to attach to them. I'm sure it might also stimulate stamp collecting a little. Just an idea. 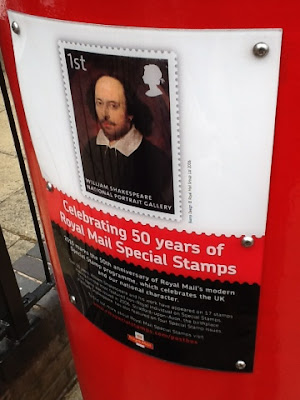