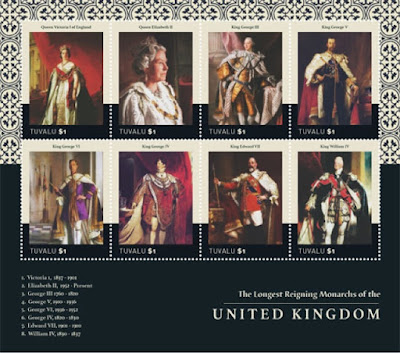 In Blog 585 I failed to illustrate the miniature sheet which has been issued by IGPC with the name of Tuvalu inscribed on it which includes 8 "stamps" all on the subject of "The Longest Reigning Monarchs of The United Kingdom" presumably to tie in with the achievement of Queen Elizabeth II in becoming the longest reigning monarch on 9 September 2015. It is not clear why this sheetlet was put out 4 months before the event especially as it identifies the Queen as being second on the list behind Queen Victoria. Perhaps the agency hopes to double its income from the issue by re-releasing it in September with an altered inscription which will identify Elizabeth II as the longest reigning monarch.

In 2013 the despotic ruler of The Gambia, President Yahya Jammah, famously withdrew his country from its membership of The Commonwealth stating that The Gambia "would never be a member of a neo-colonial organisation" and that "it will never be a party to any institution which represents an extension of colonialism" (see Blog 310). This decision however does not appear to extend to prohibiting its philatelic agents, IGPC, from cashing in on one of the great imperial institutions which Jammah so despises - the royal family of the imperial power which ruled The Gambia for decades. Hence IGPC has released a sheetlet and a miniature sheet to commemorate the birth of Princess Charlotte of Cambridge, 4th in line to the throne of The United Kingdom, and various members of the British royal family are depicted on the stamps. I wonder if President Professor Sheikh Doctor Alhaji Jammah knows that these stamps have been produced in his country's name for its citizens to use on their mail. I suspect not. 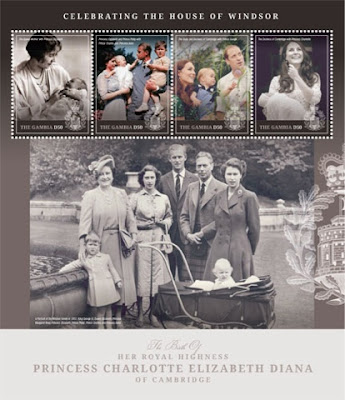 Addendum (22 June 2015). Since writing the above it has occurred to me that The Gambia celebrated its 50th anniversary of Independence on 18 February 2015. Despite trawling around the Internet, I can not, as yet (4 months after the event), find any news of any postage stamps having been issued to commemorate the anniversary which is clearly of great significance to the small nation though not, apparently, despite Sheikh Jammah's opinion, as important as the birth of Princess Charlotte!

Malta Post will issue a set of 3 stamps on 16 June 2015 as part of the SEPAC omnibus series. The theme of the issue is local culture and the designs depict scenes from local festivals - the Festa, the Annual Regatta and the festivities of Easter Sunday. The colourful designs are from photographs by Daniel Cilla and the stamps were lithographed by Printex:- 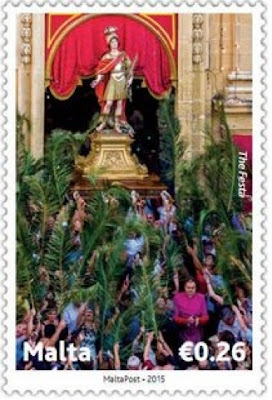 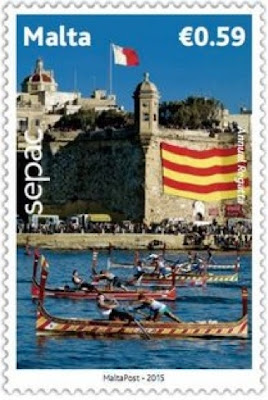 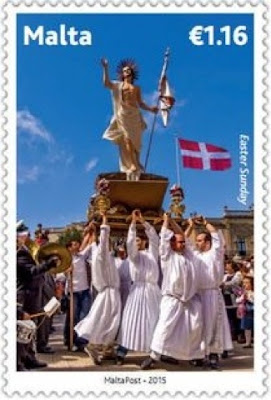 The next issue to be released on 25 June 2015 by Pos Malaysia will be a set of 3 stamps and 1 miniature sheet on the subject of "Herons and Bitterns":- 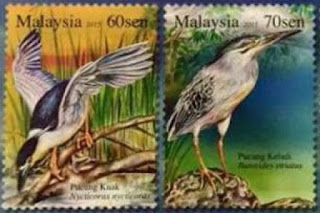 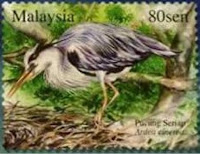 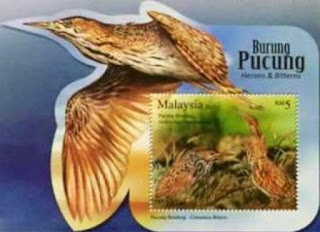 The latest philatelic products to be put out by Stamperija are stated to have a date of issue of 24 May 2015. The issues are inscribed "Solomon Islands" and are on the usual variety of subjects, mostly of no relevance to the islands.  There are 10 subsets each made up of a "sheetlet" of 4 different "stamps" and 1 accompanying "miniature sheet"; the subjects are:- Tiger Woods (US golfer), the 2015 Africa Cup of Nations football championship, Ludwig van Beethoven, Centenary of the Endurance Expedition, Pope John Paul II, Nelson Mandela, Concorde, Former US President Abraham Lincoln, Centenary of the (British) Women's Institute and Centenary of the Battle of Ypres.

Bogus issues have appeared on the philatelic market for many years. They are illegal, have no postal validity and are worthless. I have noticed that the Delcampe auction site currently has for sale a number of bogus "issues" inscribed with the names of some Commonwealth territories. They are being offered for sale by vendors in Russia and Spain and all items are on subjects relevant to Russia. All items are imperforate.
On offer is a "sheetlet" of 4 different "stamps" plus 7 accompanying "miniature sheets" inscribed Malawi which commemorate ostensibly the Ice Hockey World Championship of 2015. There is also a "sheetlet" of 4 "stamps" and 7 "miniature sheets" which commemorate the Ice Hockey Championship with the inscription "Kingdom of Tonga" on offer for an incredible $39.30c - Philatelic Collector Inc. will not be pleased to see one of their client territories among the victims of these fraudsters.
Ironically, a Stamperija territory - Uganda - has its name inscribed on 2 "sets" of these items - a set of 3 "miniature sheets" which commemorate the FIFA World Cup to be held in Russia in 2018 and 1 "sheetlet" of 4 different "stamps" plus 6 "miniature sheets" on the subject of the 50th anniversary of the cosmonaut Alexei Leonov becoming the first man to walk in space. Another Stamperija client, Solomon Islands, is also caught up in this fraud with 7 Ice Hockey Championships "miniature sheets" and 1 "sheetlet" of 4 "stamps" being offered for sale for a total of $39.30c.
The most surprising territory to appear on this list of victims is Zimbabwe with a "sheetlet" of 4 different "stamps" and 7 accompanying "miniature sheets" on the subject of the Ice Hockey World Championship all being offered for sale again for a cheeky $39.30c. All of these issues are offered on the auction website as though they are genuine postage stamps. They clearly are not. Many new issues being offered on the philatelic market by foreign philatelic agencies which are licensed to do so by some postal administrations are detrimental to stamp collecting and the presence of these bogus items being offered for sale on reputable auction websites only makes matters worse. The description of the items on the website makes no attempt to indicate their bogus nature. Caveat emptor.
Examples of the bogus issues:- 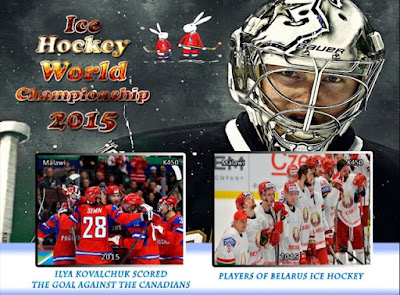 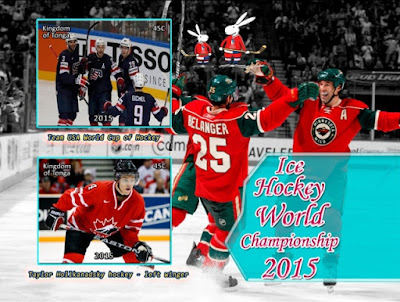 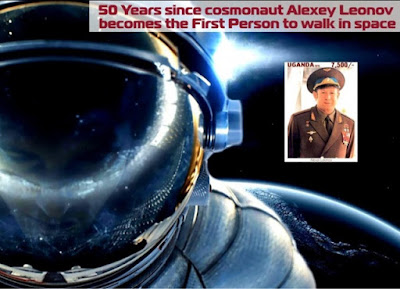 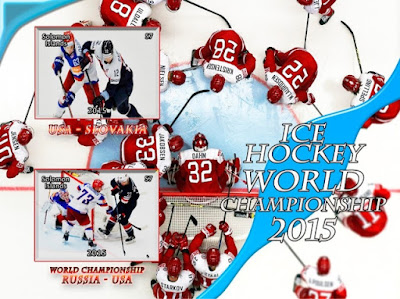 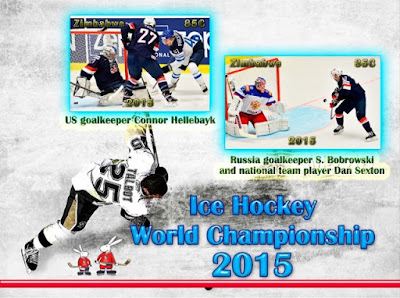