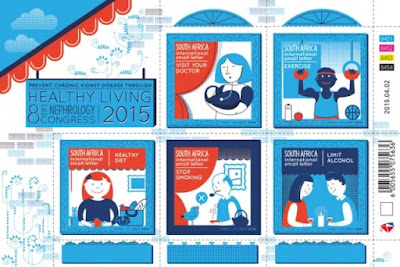 A correspondent of mine in South Africa from whom I usually obtain my southern African new stamp issues has informed me that the South African Post Office has suspended the release of new stamps with the most recent issue being the "Healthy Living"/Nephrology Conference sheetlet of 2 April 2015. Apparently the South African P.O. is in such a dire financial state that it can not afford to pay to have any more stamps printed!
My correspondent tells me that 4 scheduled issue dates have been missed already and that suppliers to the post office have not been paid. It appears that post office employees received payment of their salaries over several days at the end of the month rather than on a single set day because the Post Office had insufficient funds for one-off payments.
On one weekend in March South African Airlines suspended mail carriage until the Post Office settled outstanding payments. Some of the smaller post offices in towns have no stamps in stock and elsewhere post offices will only receive payment for stamps in cash because they have no working cash card machines and suppliers are refusing to replace them until the South African Post Office pays money owed to them.
My correspondent informs me that there is a feeling that matters at the South African Post Office are now improving but it may still be some time before another new South African stamp issue makes an appearance.
Last year the South African Post Office experienced a prolonged strike by postal employees and this also led to the organisation experiencing a delay in releasing new stamp issues.
South Africa joins a growing list of territories which do not seem able to afford to produce postage stamps. Some time ago, an official of the Samoan postal service admitted that the business could no longer afford to produce stamps which were sold at a large loss and that was why Samoa had allowed Philatelic Collector Inc. (PCI) to take over its stamp programme - either PCI produced and managed the issue of stamps in the name of Samoa or there would be no Samoan stamps at all (personally I would have preferred the second option).
The postal administrations of the offshore islands of the British Isles are also experiencing severe financial problems - so much so that the Isle Of Man Post Office has been forced to close its flagship post office in Regent Street in Douglas and move it to a local newsagents! (See Blog 502). Presumably this is why Isle Of Man Stamps And Coins is swamping the market with new philatelic products - it hopes to squeeze every possible last penny out of stamp collectors to help the Post Office's difficult finances - but we all know that collectors eventually become fed up of excessive issues and simply give up collecting the issues of the offending territory completely. Excessive issuing may seem necessary but it is a very short-sighted approach to making money from selling stamps.
Let us hope that postal administrations in the offshore islands do not find themselves in the same position as regards new stamp issues as South Africa or Samoa. Perhaps in a year or two we will find Stamperija taking over Manx new issues - now there's a thought. 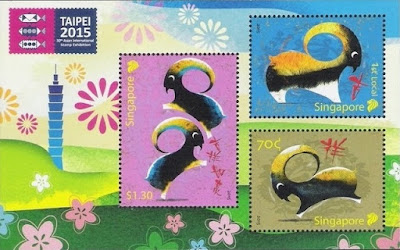 With the 200th anniversary of the Battle of Waterloo just days away it's surprising that the St. Helena postal administration has not taken the opportunity to commemorate philatelically the world-changing event especially when the island, as the place of the defeated Bonaparte's exile, is so closely linked to the story of Bonaparte. True an issue is due in October 2015 to commemorate the bicentenary of Bonaparte's arrival on the island but I'm sure it would not have been inappropriate for St. Helena to have commemorated Waterloo itself. I suspect such an issue would have been popular and would have earned some useful income for the St. Helena Post Office.
I have no idea what role its seemingly lethargic philatelic agents, CASCO, would have played in helping St. Helena to choose its philatelic programme for 2015 but this looks to me like a missed score into an open goal.
Contrast this with the way Pobjoy Stamps has involved the story of Ascension Island with that of Bonaparte with its ongoing Bicentenary sets, including a Battle of Waterloo stamp, (see Blogs 236, 394 and 534) which have been interesting and attractive whilst remaining conservative in output and face value:- 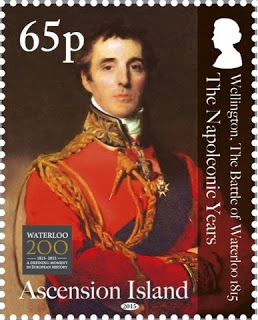 St. Helena has not always been slow to stress it links with Bonaparte. Two stamps were issued in 1971 to commemorate the 150th anniversary of the former tyrant's death on St. Helena:- 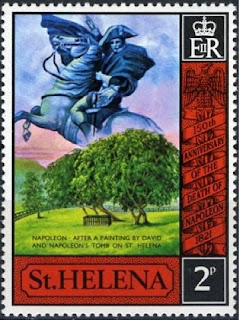 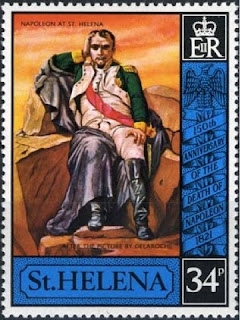