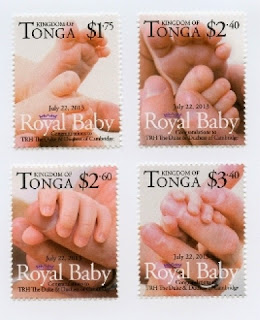 I have to confess that I do not always keep up to date with what is happening in the Tongan royal family and so I have only just learned that a son was born to the heir of the throne of Tonga, Crown Prince Topouto'a, and his wife, Princess Sinaitakala, on 10 May 2013 in Auckland. The baby was named Prince Tafa'ahau Manumataonga and the picture below shows him at the age of 6 months with his mother. Prince Tafa'ahau is therefore the second in line to the Tongan throne. A cause for local philatelic celebration you might think. Well no. The "Boutique Philatelic Agency" which produces stamps on behalf of the Tongan Post Office has indeed issued stamps to commemorate the "Royal Baby" but sadly not the Tongan royal baby. Instead 8 stamps and 2 miniature sheets (depicted below) were issued to commemorate the birth of the third in line to the British throne, Prince George Of Cambridge, who came into the world a couple of months after Prince Tafa'ahau. So far the poor little Prince of Tonga has received no philatelic commemoration by his own country's post office and to rub salt into the wounds, a second issue to commemorate Prince George was made by Tonga - this time to celebrate his christening but there has been no such issue for the Tongan Prince.
I have to say that if I were the Tongan Crown Prince I would be pretty annoyed if my local postal administration chose to issue stamps which commemorated the birth of some foreign prince's son and ignored my own. But that's modern philatelic agencies for you - featuring international celebrities seems to be a good way to make sure you will get reasonable sales from a stamp issue - clearly William and Kate are celebrities worth featuring while Topouto'a and Sinaitakala are not. 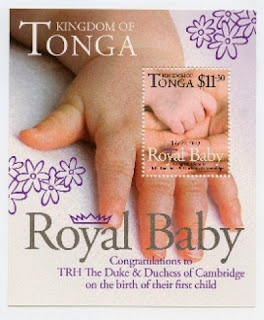 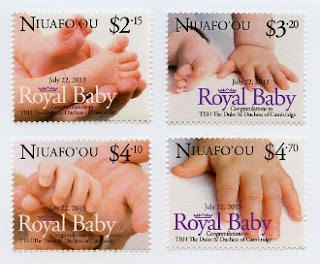 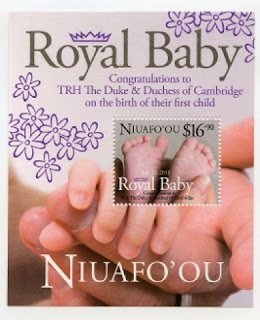 Another country which has long sold its international philatelic reputation to foreign agencies is Maldives. In Blog 360 I reported a 15 MVR stamp depicting a turtle which I had not previously seen and which I speculated may have been part of a previously unreported definitive series on sale locally but not offered for sale through philatelic channels. Now another similar stamp, again a 15 MVR value but depicting a dolphin and with a different style of lettering, has been reported on Stampboards by JonEboy.
In the Blog of 30 December 2011 I mentioned that Maldives Post was seeking tenders for the printing of a new definitive set but it did not include a 15Rf value though the need for a 15Rf value may have arisen subsequently. Hopefully, if Maldives Post does not release details of these stamps in the foreseeable future, someone who is on a luxury holiday in the islands will visit the post office in Male and discover the truth about this mysterious issue as well as whatever happened to the 2010 "350" sheetlet which I mentioned in Blog of 29 April 2012.