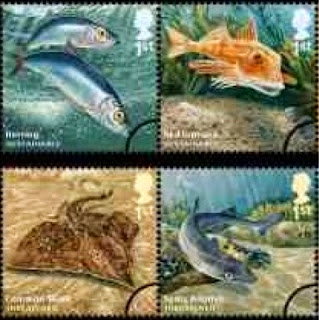 When you look at fish it is hard to describe most British species as "attractive" but Royal Mail will issue an attractive set of stamps on 5 June 2014 which features 10 such creatures - the featured species are labelled either as being "sustainable" or "endangered". I particularly like the red gunnard, the comically ugly fish shown above at the top right which is fashionable with chefs at the moment for its alleged deliciousness and sustainability. Other featured species are herring, dab, pouting, Cornish sardine, common skate, spiny dogfish, wolffish, sturgeon and conger eel.
Regrettably I have to confess that my favourite is still a lovely piece of delicious fleshy white cod whether or not it is deep fried in batter and served with chips or prepared some other way. 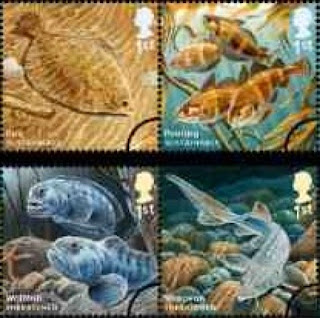 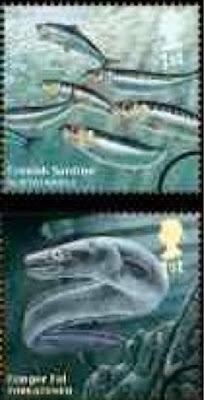 From fish to birds. Pobjoy Stamps has announced that the latest issue to come from its stable is a set of 4 stamps and 1 miniature sheet from Tristan Da Cunha which features finches from the smaller islands of the territory and showing how they vary rather like the finches studied by Charles Dawin in The Galápagos Islands. Time and time again I feel the need to praise the issues which are put forward from Pobjoy Stamps/Creative Design Associates - even though many of them are based on photographs and not original art, the photographs are always so well chosen, clear and attractive and this set is no different. It depicts 5 very attractive and interesting bird portraits and must surely appeal to anyone who likes to collect modern stamps:- 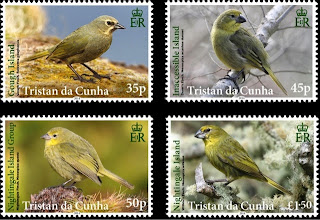 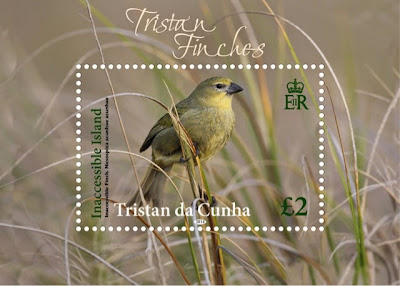 India issued a single stamp on 25 April 2014 to commemorate the Indian National Council of Churches:- 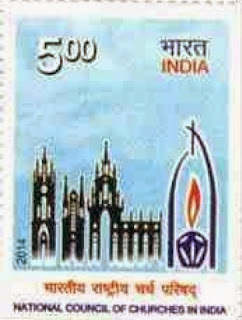 Australia Post will issue a single stamp on 6 May 2014 to commemorate the centenary of the Australian Red Cross. The stamp was designed by Lisa Christensen and lithographed in sheets of 10 (gummed) by McKellar Renown. A self-adhesive version of the stamp will also be available from coils. 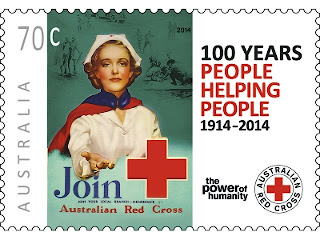 Australia's next issue will then be set of 4 gummed stamps accompanied by a gummed miniature sheet and 4 self-adhesive stamps from coils and 4 more self-adhesive stamps from a booklet which will be released on 13 May 2014 on the subject of "Bush Ballads"and which commemorate the songs of AB "Banjo" Patterson. The issue was designed by John White from artwork by Jamie and Leanna Tufrey and lithographed by McKellar Renown:-

On 3 June 2014, Australia Post will issue a single gummed stamp which commemorates the holding of the Summit of Leaders of the G20 in Brisbane later this year. the stamp was designed by McKillop College and lithographed by RA Print:-

Australia Post will then issue a set of 4 gummed stamps and a miniature sheet which will commemorate the centenary of the issue of the first Australian stamps which depicted King George V. Again, the issue was designed by John White and lithographed by EGO:- 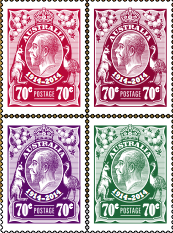 But Australia Post has not finished there - on 17 June 2014 it will release a set of 4 stamps inscribed "Australia" (and not "Christmas Island Australia" - "Christmas Island" appears on the stamps but not as the country name) on the subject of the Christmas Island National Park. The issue was designed by Sharon Rodziewicz and lithographed by RA Print:-

And on 24 June 2014 the inexhaustible Australia Post will issue another set of 4 stamps inscribed "Cocos (Keeling) Islands" which depict maps of the islands. This set was designed by Boschen Design and lithographed by RA Print:-

In Blog 395 I mentioned that Cyprus is to issue 2 stamps on 2 May 2014 which depict musical instruments as the island's contribution to the Europa issues and these will be accompanied by a booklet as usual which contains 10 of the stamps ( 5 of each design) and this is now depicted below:-