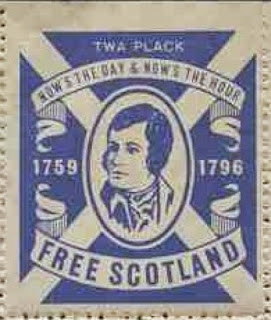 On 18 September 2014 a national referendum will be held in Scotland to allow the population to express their will as to whether Scotland should become a fully independent sovereign state or remain a part of The United Kingdom. The holding of the Referendum comes as a culmination of many years of campaigning by Scottish nationalists aimed at separation of Scotland from the Union with England which the English and Scottish parliaments had agreed to in 1707 and which had been the ultimate outcome of the succession of James VI, the Scottish king, to the English throne in 1603.
As part of the campaign for Scottish independence, the Scottish Patriots'Association produced a series of propaganda labels in the 1960's and 70's which were sold so that people could stick them on their outgoing post to further the cause of Scottish separation from England. In 1964, the British Post Office quite reasonably commemorated the 400th anniversary of the English dramatist and playwright, William Shakespeare, and Scots felt that their equivalent of Shakespeare, Robert Burns, should be similarly commemorated by the Post Office although there was not any particularly important anniversary associated with him at that time.
Still, it was thought to be important that Burns should not be outdone by the immortal English bard and so pressure increased on the Post Office to issue stamps which featured Burns and it is thought that the production of the Burns label featured above by the Scottish Patriots' Association swung the argument in favour of a Burns commemorative issue. On 25 January 1966 the 2 stamps depicted below were released to commemorate Burns. The stamps were printed in photogravure by Harrison and Sons Ltd.:- 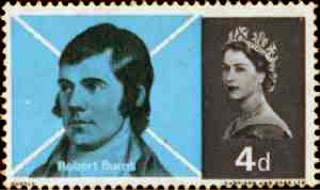 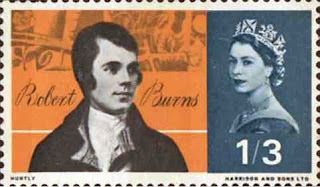 The Scottish Patriots' Association issued a number of other labels which included in their subjects the themes of Self-government, William Wallace, St. Andrew - the Patron Saint of Scotland, John Knox, The Declaration of Arbroath, a Scottish Parliament and an item dating, I think, to 1976 which featured the Scottish Assembly. A sheet of 16 was sold for 15p or 8 sheets could be purchased for £1. The design featured the Assembly Building in Edinburgh with the red lion rampant in the upper right corner:- 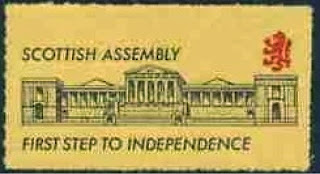 I have found it rather difficult to track down any information about these items let alone find any other than the Burns label for sale anywhere. While they are not postage stamps they are interesting and will have extra significance if the Scots choose to leave the United Kingdom.
Meanwhile, to return to Burns, Royal Mail, issued 4 stamps in his honour on 26 January 1996 on the occasion of the bicentenary of his death. The designs consisted of quotations from his work accompanied by appropriate illustrations:- 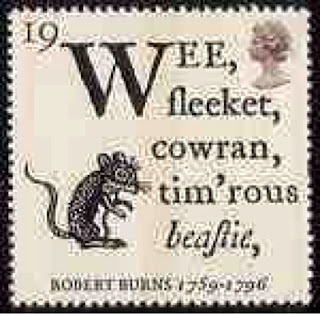 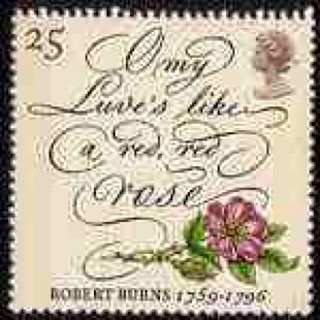 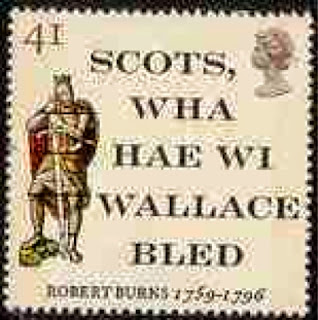 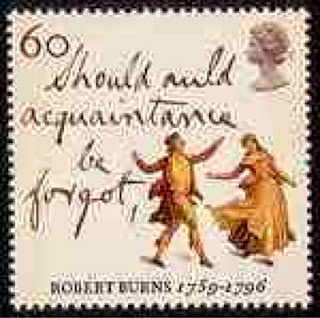 Just 13 years later, on 22 January 2009, a third Burns issue was released by Royal Mail but this time to commemorate the 250th anniversary of his birth. The issue took the form of a miniature sheet which contained 6 different stamps -  4 Scottish "regional definitives" plus 2 new designs, one of which was a portrait of Burns:- 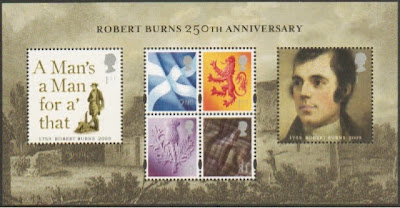 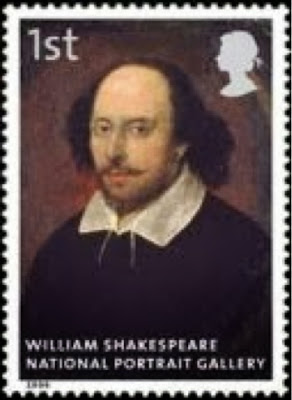 In Blog 326, I also detailed some issues from other Commonwealth countries which have commemorated Shakespeare but I overlooked two issues of 1990 which were produced in conjunction with the "Stamp World London 90" International Philatelic Exhibition - issues from 2 Caribbean philatelic entities whose stamps I rarely obtain but on this occasion I have to confess to rather liking these 2 particular products. They are of course completely nonsensical but really quite amusing and even witty.
The first issue is a set of 8 stamps and 2 miniature sheets which was issued by Grenada Grenadines on 3 May 1990 in which the Walt Disney cartoon character, Mickey Mouse, has sprouted a moustache and may or may not be a murine Shakespeare but whatever his new identity he is depicted wandering around the tourist sites of Stratford-upon-Avon. On the 15c value, Daisy Duck, is depicted presumably in the role of Shakespeare's wife, Ann Hathaway, outside her cottage at Shottery in Warwickshire and other Disney characters appear in other guises on other values as depicted below:- 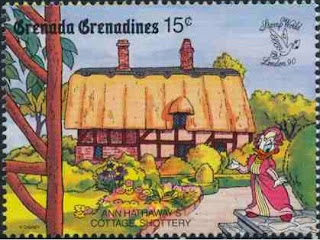 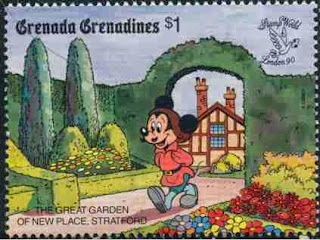 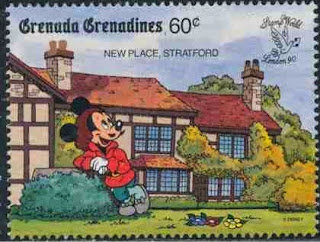 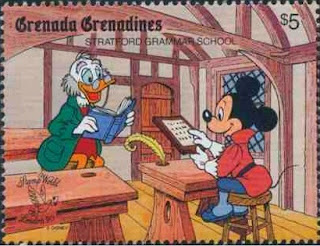 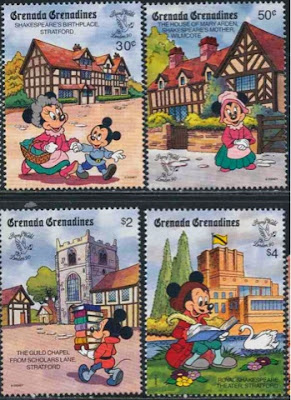 Some of the scenery can be seen in the photographs I feature of Stratford in Blog 326. I have to admit to having a particular fondness for the 2 miniature sheets with Mickey depicted on one of them standing on Edgehill, site of the first battle of the English Civil War, looking over south Warwickshire (Edgehill is not in Stratford as the sheet's inscription claims) or "Shakespeare Country" as the inscription puts it.
I also like the other sheet which has Shakespeare-Mickey reading poems in a boat on the river Avon passing Holy Trinity Church (see Blog 326) to Minnie Mouse (naughty old Mickey, after all we know that Daisy Duck is in the role of Ann, Shakespeare's wife, in this set so who's this young female with whom Mickey/Shakespeare is pleasantly rowing up the river with?!) 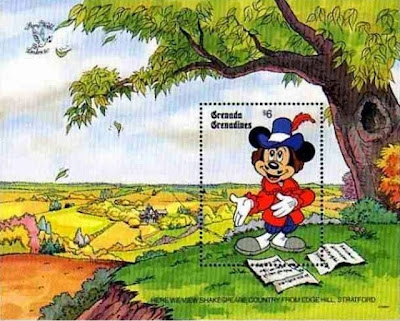 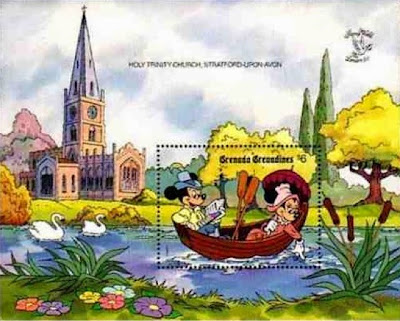 The second Walt Disney-Shakespeare set released on 3 May 1990 was issued by the other Grenadines, St. Vincent Grenadines, under the title "Mickey's Shakespeare Company". Again there are 8 stamps and 2 miniature sheets which this time feature Disney characters as characters from Shakespeare's plays including, improbably, Goofy as Mark Anthony in Shakespeare's "Julius Caesar" and Donald Duck as the eponymous Hamlet:- 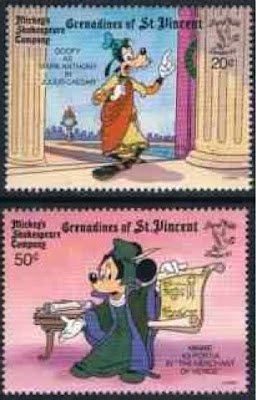 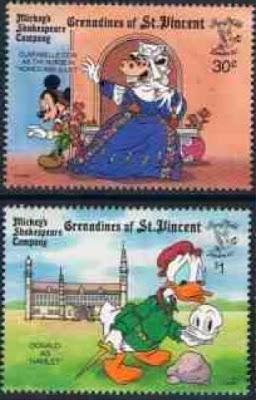 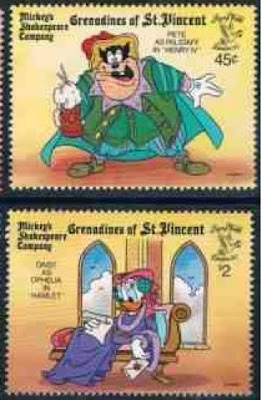 Once again, the 2 miniature sheets are really rather amusing. Would Sir Rowland Hill back in 1840 ever have thought that there would be a stamp which would feature "Clarabelle Cow as Titania"?:- 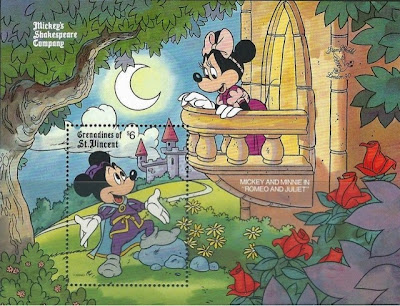 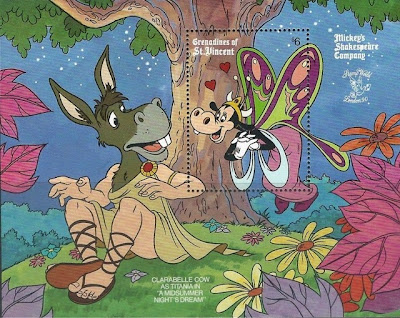 Rather astonishingly, the Grenada Grenadines set has been the subject of an academic paper which was presented at a notable international meeting about Shakespeare which was recently held in April in Paris. The meeting, titled "Shakespeare 450" had a paper presented to it by Francisco Fuentes Rubio of the University of Murcia in Spain which was titled "Mickey Mouse Shakespeare: An Apparently Conservative Walk Through Stratford".
The abstract of the paper stated "In 1990 for the international philatelic exhibition Stamp World London 90, Shakespeare was memorialised in a set of 10 Disney postage stamps issued by Grenada Grenadines which portrayed a Shakespearean Mickey Mouse along with different views of Disney-like versions of Shakespeare's home town, Mary Arden's house and Ann Hathaway's cottage. These postal documents at first hold a conservative position, as they seem to link the author to Merry Old England, a utopian view of a past England. Yet, as I shall show, the stamps show a contradictory political message"
It goes without saying that postage stamps frequently have political messages but I have to confess that this is the first time that I have considered that any of the notorious Disney stamps ever had a political message, especially a non-Conservative one. I would have loved to have heard Francisco Fuertes Rubio's presentation and to know what his conclusions were. I shall try to find out more. I suspect that the New York-based philatelic agency, IGPC, would make much of the fact that an academic with an interest in Shakespeare has produced some academic work about their products were they to know about it..
I suppose that some people may view that IGPC's infiltration into the world of Shakespeare may represent a sort of laissez majeste for The Bard or even represent an example of philatelic cultural imperialism as discussed in Blog 301 by which the banal American cultural icon, the Mouse, replaces the grand English cultural icon, Shakespeare. Personally, on this occasion, I choose to view the Shakespeare/Mouse issues as being good old fashioned fun which perhaps modern stamps should be (not that I am advocating a fresh flood of Disney stamps as we experienced in the 1980's and 1990's).
With Scotland poised to break into the world's news bulletins in a big way in the next few months, perhaps IGPC might approach Walt Disney to produce a set of stamps similar to the Shakespeare issues but instead featuring Robert Burns - there's probably a lot of money to be made out of such an issue from all the independence-minded Scots.