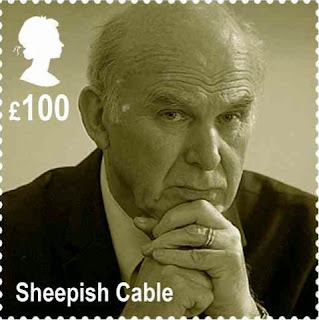 Why do postal administrations still produce postage stamps or allow philatelic agents to produce stamps on their behalf?
The first reason has to be that they provide a useful source of extra income especially when marketed alongside additional "collectables".
Secondly, they can be a form of promotional material for the postal administration which the consumer pays for directly by buying the stamps.
Thirdly, they fulfil a national propaganda role or possibly, for some countries, provide propaganda for the politicians who hold power in those countries and can influence the activities of the local post office.
Fourthly, they provide a means of celebrating local or international celebrities, events or anniversaries.
Fifthly, they can be used on items of mail to indicate that postage has been prepaid (this was of course the role originally intended for postage stamps).

Although stamp collecting is no longer in fashion as a hobby in many countries, including Great Britain, the general public and more particularly, the Press, remain aware of the role which stamps play when used to commemorate important events or personalities or act as propaganda. From time to time, the press will embrace joyously a new stamp issue such as the Doctor Who or Andrew Murray issues of 2013 and give it extensive coverage. Sometimes the press will use stamps to their own ends and invent spoof stamp designs to drive home a political point which they are trying to promote or merely to act in a satirical context. Such an "issue" has recently appeared on the Internet and very funny it is too and it gives us Great Britain's first ever £100 stamp (illustrated above).
The Huffington Post has illustrated 4 spoof Royal Mail stamps under the headline "Royal Mail Unveils Commemorative Privatisation Stamps" referring to the privatisation of Royal Mail by the present British coalition government. Beneath the headline is the text, "As the Royal Mail announces the axing of 1,600 jobs, it also brings out a new set of commemorative stamps...". The piece is credited to David Beresford and David Schneider. The designs feature the British Business Secretary, Vincent Cable (£100), George Osborne, the Chancellor of The Exchequer (£10), a sign outside a British "Job Centre Plus" (£25) and a pile of bank notes which alludes to the large profits made by investors in the City of London when Royal Mail was privatised at a price substantially below the value of the company (£50 value):- 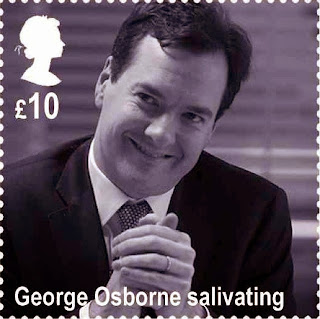 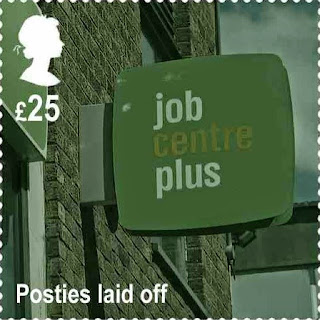 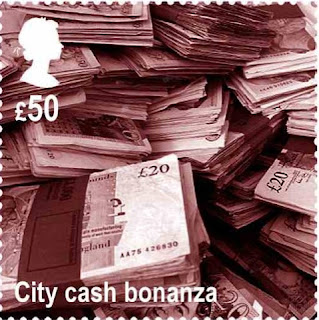 Spoofs they may be, but these designs - beautifully copying the style frequently used for modern British stamps - show that stamps still have a power about them even if they are being used less and less often on mail. Therefore, I suspect that the issuing of stamps (and the collecting of them) will carry on rather longer into the future than their disappearing use on mail would justify.
Meanwhile, back in the world of real stamps, Malta will issue a pair of stamps on 9 May 2014 as its contribution to the 2014 Europa omnibus series. The designs reflect this year's theme of "national musical instruments" and the issue is accompanied by a booklet of 5 x 59c values. The stamps were lithographed by Printex of Malta:- 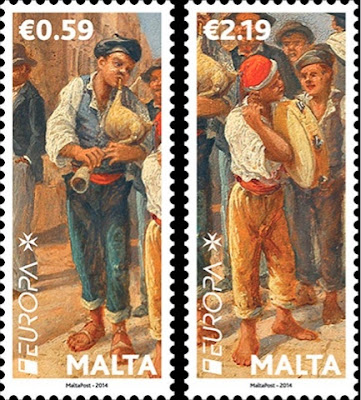 The 2014 Essen Philatelic Exhibition will be commemorated on 8 May 2014 by another version of the 37c Map of Malta stamp with an appropriate label attached to it:-

Gibraltar issued a set of 3 stamps on 2 May 2014 which depicts species of dolphins which can be seen in waters off Gibraltar. The stamps were designed by Stephen Perera from illustrations by Jonathan Pointer and lithographed by Cartor:- 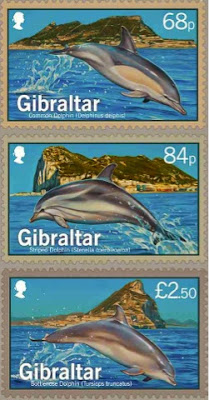 The next issue from Royal Mail on British films to be released on 13 May 2014 has already been detailed in Blog 366 but below I provide better illustrations of the 6 stamps and 1 miniature sheet that make up the issue:-- 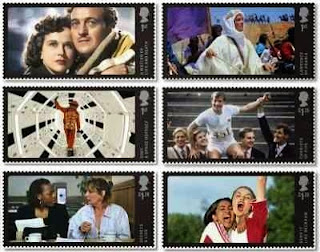 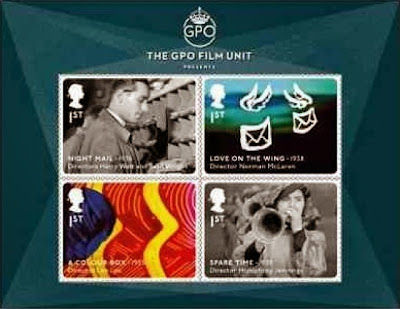