Royal Mail may have felt that it was not necessary to commemorate the 450th birthday of William Shakespeare (Blog 326) but I at least have my own personal philatelic souvenir of the important anniversary.
I passed a very enjoyable day in Stratford-upon-Avon, the lovely Warwickshire town where Shakespeare was born in 1564, and visited the Stratford post office, situated a very short distance from the house where Shakespeare came into the world so that I could send a cover by recorded mail to myself with the Stratford-upon-Avon post mark dated 23 April 2014. I placed the 6 stamps which Royal Mail issued on 12 April 2011 to commemorate the 50th anniversary of the Royal Shakespeare Company on my cover and handed it over to the very pleasant lady counter clerk. I think she thought I was a little mad in using such a high total value of stamps for an ordinary recorded letter and on the whole I suppose philatelists probably are eccentric to say the least when you consider how we spend our money on these little pieces of paper - eccentric squirrels who buy the strangest philately-related things, why some people even buy "stamps" produced by Stamperija. 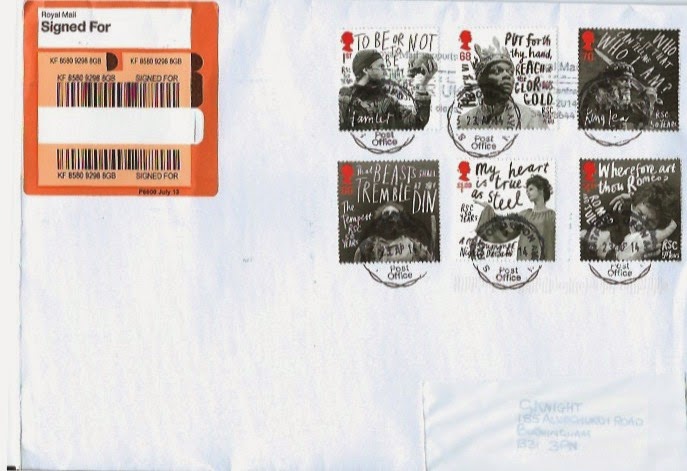 The date of 23 April is generally accepted as Shakespeare's birthday although there are no records to confirm the date but the record of his baptism on 26 April 1564 is on display in Holy Trinity Church in Stratford and because children were baptised almost immediately after being born in those days when infant mortality was extremely high in England, 23 April is generally accepted as the date when the genius was born. Hence I visited Stratford on that day and posted my souvenir cover. A close up of the 6 stamps with their "STRATFORD UPON AVON Post Office" postmark with the date "23 Ap 14" is depicted below:- 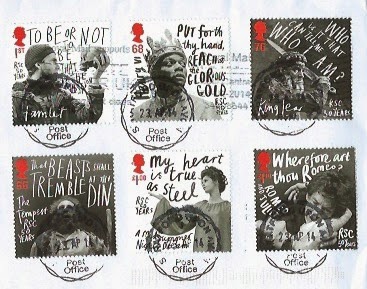 In a previous blog I pointed out that the actor David Tennant, who was depicted on a stamp last year in his role of Doctor Who, is shown on the 1st class value playing Hamlet holding the skull of Yorick in his hand. Tennant played another well received role as recently as the autumn of last year when he appeared as King Richard II in the play of that name at the Royal Shakespeare Theatre at Stratford (the Tennant stamp is shown at the head of this piece) and another actor who was featured on the 66p value of this set, Anthony Sher, (depicted below) is currently appearing at Stratford in the role of Falstaff in Henry IV Part 1:-

There is much to see in Stratford that is linked to Shakespeare. Recently, as detailed in Blog 395, Universal Mail United Kingdom issued a booklet of 5 different postcard airmail stamps showing scenes around Stratford including the house where Shakespeare was born, the Royal Shakespeare Theatre, a statue of Shakespeare and Holy Trinity Church. Sadly, I could find nowhere in Stratford that was yet selling these stamps but hope to track them down on my next visit. For anyone who has never visited Stratford, here are some photographs taken last autumn around the town:-


Most relevant, I suppose, is the house where William Shakespeare was born. There were many tourists of many nationalities there on the date of the birthday - what a pity there was no philatelic souvenir for them to buy. Perhaps Royal Mail ought to copy Universal Mail and have stamps for sale at important tourist sites so that visitors can mail their postcards home with a souvenir stamp stuck on them.

If we walk along the river from the theatre we eventually arrive at Holy Trinity Church. The photograph  shows the glorious view of the church from across the river (with a certain dog in the foreground who is probably dreaming of landing the role of Crab, the only dog to appear in a Shakespeare play, in Two Gentlemen Of Verona, which is soon to be performed on the main stage of the Royal Shakespeare Theatre for the first time in many years):-


Shakespeare's grave is in the church itself next to some to his relatives and at the head of it is the intriguing message shown in the photograph below:- 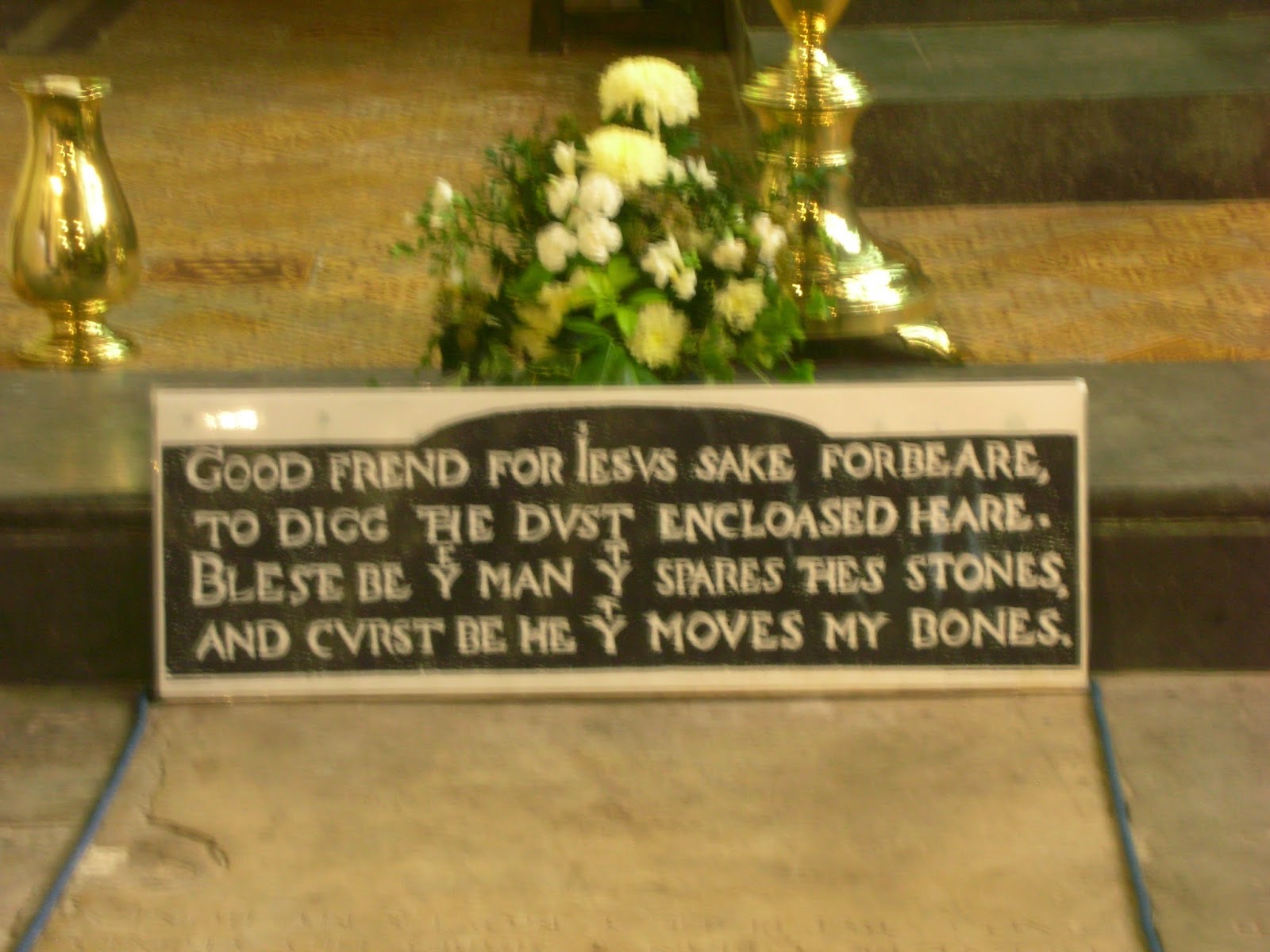 A weekend of celebrations is being held in Stratford to commemorate the 450th anniversary of Shakespeare's birth and it is disappointing that Royal Mail have not participated in the marking of his anniversary by the release of a stamp issue. Ah well, forsooth, we still have the Peppa Pig stamp issued in January to show that Royal Mail gets its priorities right when it comes to choosing what will be included in its new issue programme. At least I have a rather nice and unique philatelic souvenir to place in my own collection.