With the Buckingham Palace miniature sheet which Royal Mail released on 15 April 2014 it became normal practice to issue the sheets with a white selvedge at the left hand side for sale over ordinary post office counters. The selvedge includes a barcode and is included to help the Post Office sell the item practically. The second issue to have this attachment was the British Films miniature sheet  which was released on 13 May 2014 (depicted below). 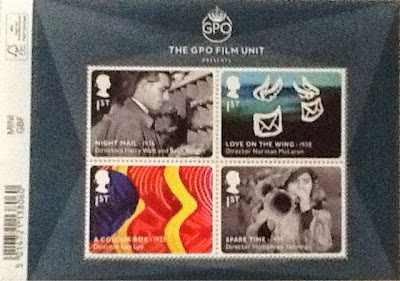 Strangely, the miniature sheets sold from the Philatelic Bureau do NOT include the selvedge so we may take the view that the sheets obtainable from the Philatelic Bureau are incomplete and therefore effectively damaged so as to make them unsatisfactory for collection or alternatively we now have two varieties of miniature sheet produced with each issue - one with the selvedge and one without. Personally, I consider that I shall no longer buy miniature sheets from the Philatelic Bureau and only buy them over the counter from post offices in order to obtain the complete article.
I have just returned from a happy few days in Stratford-upon-Avon and have tracked down the place where Universal Mail United Kingdom's Bespoke booklet of 5 overseas airmail postcard tourist stamps is being sold and have bought some for my collection. A strip of 5 stamps is being sold for £5.15p at the "Discover Stratford" tourist information centre. This is the only place where these stamps are available and they are not directly available from Universal Mail themselves. I do wish the various Bespoke issues were made available through Universal Mail to make it easier for collectors to obtain them - it's very silly to make collectors attempt to obtain the Bespoke issues from various places spread across Great Britain - at this moment I'm not sure it's even possible. 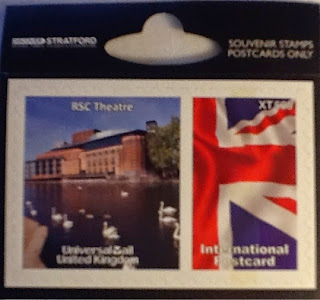 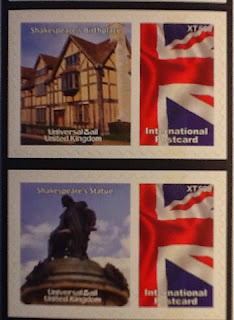 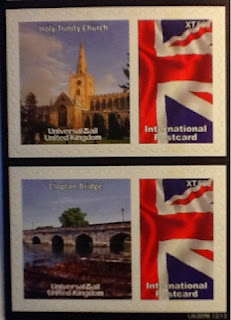 I do like the idea of tourist stamps - perhaps Royal Mail should think about producing such items.
Malta Post issued a miniature sheet on 15 May 2014 which commemorated the 50th anniversary of Independence and 40th anniversary of the establishment of the Republic. The sheet was designed by Malta Post p.l.c. and lithographed by Printex. Given the importance of the anniversaries this is a rather disappointingly unimpressive item to celebrate such significant national anniversaries:- 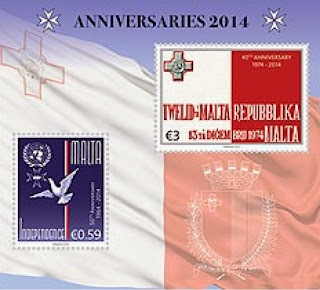 New Zealand Post will issue a set of 6 self-adhesive stamps and 1 gummed miniature sheet  on 4 June 2014 to commemorate Matariki, the Maori new year. The stamps were designed by Rangi Kipi, Taraniki Tuturu and Te Ataiwa and printed in lithography by Southern Colour Print:- 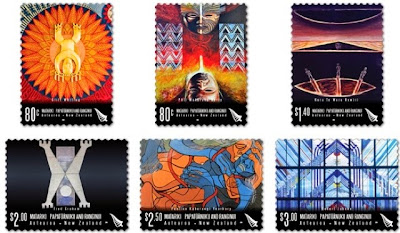 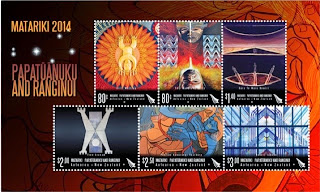 Another festival has been celebrated philatelically, this time the Buddhist festival of Vesak. A set of 4 stamps and 1 miniature sheet were issued by Sri Lanka on 12 May 2014:- 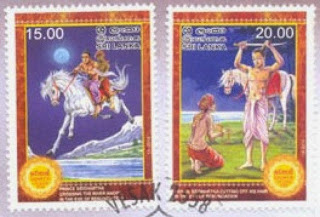 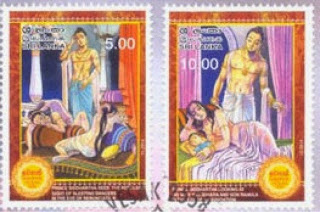 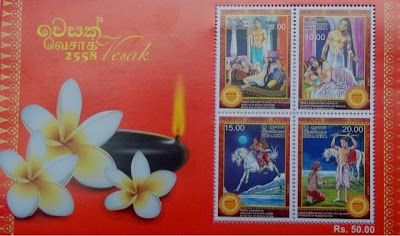 More to report on the activities of Stamperija with details of items produced in the names of 3 different Commonwealth countries.
The first "issue" of 2014 of The Solomon Islands had a release date of 3 March and was comprised of 9 sheetlets each of 4 different "stamps" each with an accompanying miniature sheet, each sheetlet-m.s. unit being devoted to a different theme - Volcanoes and minerals, Cats, Australian mammals, Dolphins, Owls, European "Speed" trains, "Australian legends ("celebrities"), Submarines and Ships. Some of these choice items are depicted below:- 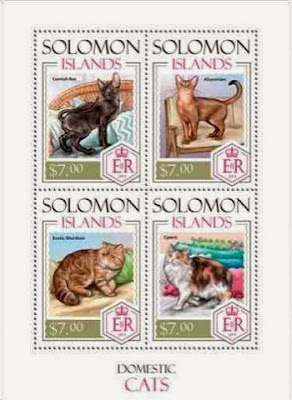 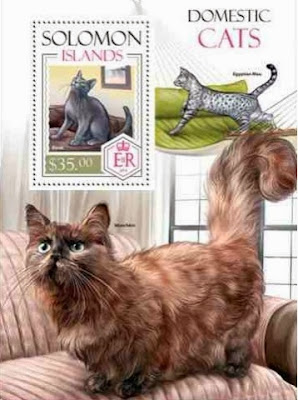 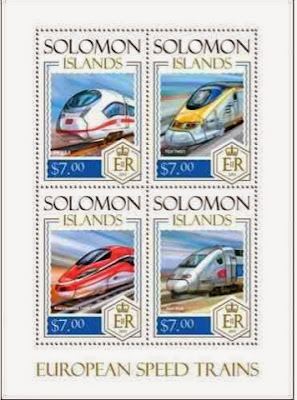 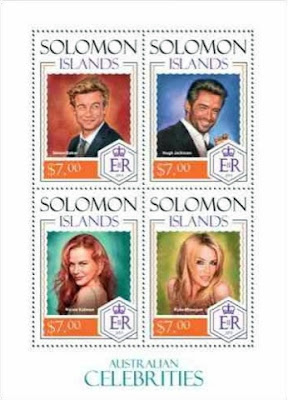 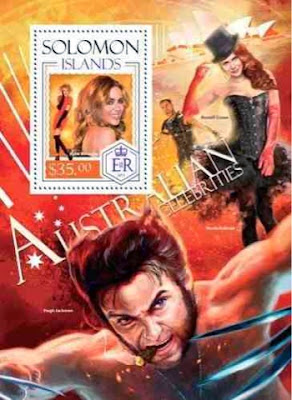 There are yet more items for Mozambique which are to be added to the 2013 total - another 14 sheetlets and 14 miniature sheets with an "issue date" of 25 November. As usual there are 4 different stamps per sheetlet and 1 sheetlet plus its accompanying m.s. are associated with a different theme. The subjects this time are :- Queen Elizabeth II, Insects, Airplanes, The art of Paul Gauguin, The Porsche 911 automobile, The artist Salvador Dali, Predators, Formula I driver Sebastian Vettel, The Soviet space programme, Steam railway engines, Swiss trains, Mushrooms and butterflies, 2013 Athletics Championsip in Moscow and The Chinese New Year of the horse. 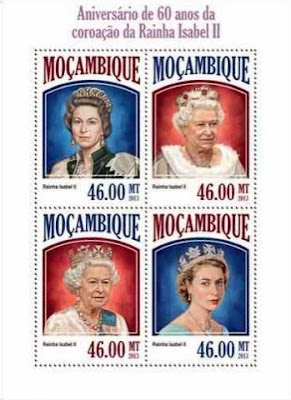 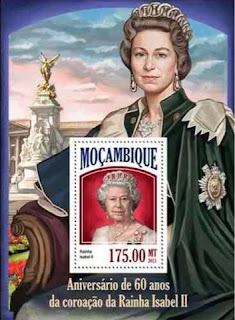 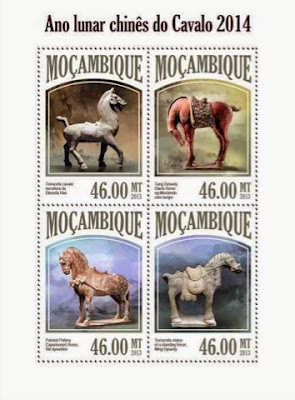 As usual most of these items have subject matter which is of no relevance to Mozambique. It seems unlikely that the Chinese new year is widely celebrated by the locals of the the country for instance. 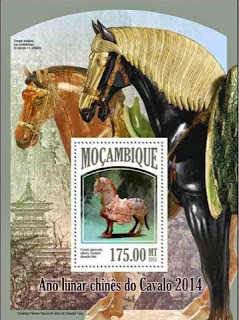 However, there is an additional item of some possible interest - a single 46MT value sold in an ordinary sheet of 25 stamps. This does not have the look of having been produced by Stamperija and is in a format which suggests that it is intended to actually be sold across post office counters in Mozambique for use on genuine mail by the general public. There are about 12000 Chinese citizens living in Mozambique so perhaps this issue was made for them to use on their new year greetings-related mail. I think I may try to buy a single one of these because they look as though they may well be genuine postage stamps as opposed to "collectables":- 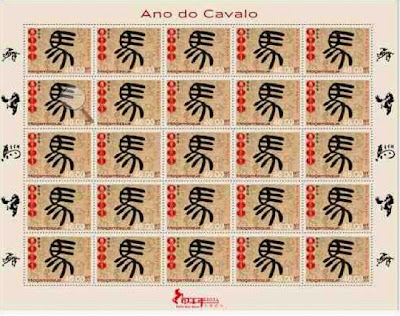