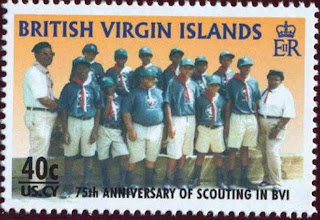 I have recently obtained from Nigel Haworth an example of the 40c stamp (illustrated above) which was issued in 2009 by The British Virgin Islands to commemorate the 75th anniversary of scouting in the territory. It is reported in the January 2014 Catalogue supplement in Gibbons' Stamp Monthly that a set of 4 stamps on this subject was to have been released in 2007 but did not appear because, it is said, there were inconsistencies in the designs and delays in the printing. Eventually in 2009, due to local pressure, the above single stamp was released for local use in limited quantities but not offered to wholesale dealers so the issue went largely unnoticed until recently when Virgin Islands expert Dr. Giorgio Mighliavacca drew Gibbons' attention to the item. The 40c face value did not actually represent a local postal rate so the stamp received little usage.
Hong Kong China will issue a $20 miniature sheet on 29 April 2014 on the subject of Hong Kong's postal history from 1911 to 1976 centred on the story of the old Post Office building in the former British colony. The issue coincides with an exhibition being held in Hong Kong on the subject. The miniature sheet was designed by Arde Lam and printed in lithography with hot foil stamping by Cartor. The issue also includes a $60 prestige booklet which contains the miniature sheet:- 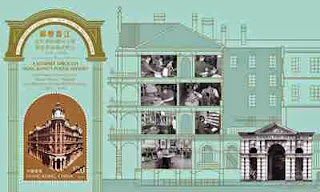 On 20 April 2014, The Isle Of Man issued 2 identical sheetlets save that one is perforated while the other is imperforate (and sells for £7.50 instead of £3 which is the total face value of the stamps in the sheetlet) to commemorate the centenary of the Schneider Cup aviation prize won by Howard Pixton, an Isle of Man resident who had been born in Manchester. The sheetlet contains 4 x 75p stamps which were designed by Robin Carter and lithographed by BDT. The imperforate sheet is sold in a limited edition of 1500 and is said to hark "back to the early years when all stamps were imperforated and had to be cut from the sheet with scissors or a knife" (the first perforated stamps were actually issued in 1850 - 64 years before Pixton won the Schneider Cup so there's no real connection between the subject of this issue and imperforate stamps making the imperforate sheet an irrelevant and expensive nonsense:- 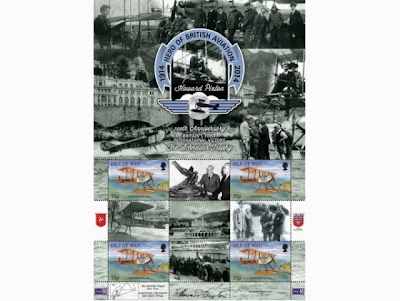 The same postal administration has also issued (on 16 April 2014) what it calls a "Smilers sheet" to commemorate "the first 20 TT wins of John McGuiness", known as the "Morecambe Missile", on the occasion of the 15th anniversary of his first win. The sheet includes 2 previously issued stamps (5 of one and 3 of the other) and sells for £10.11p. I find it hard to work up any enthusiasm to spend over £10 to include this particular item in my Isle of Man collection. One can not help but feel that the first dreaded Manx "Post And Go" items must be on their way in the near future to add to the rest of this stuff. 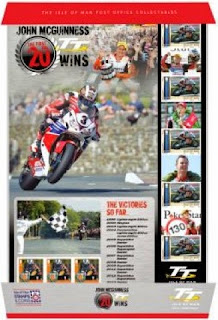 Malta will issue a miniature sheet on 26 April 2014 to commemorate the canonisation of the late Popes John XIII and John Paul II. The sheet which contains 2 different stamps was designed by Malta Post and lithographed by Printex:- 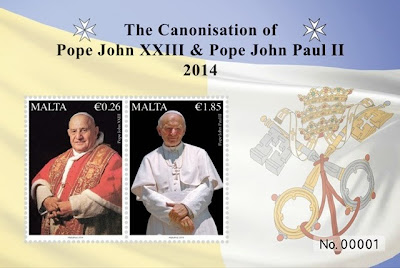