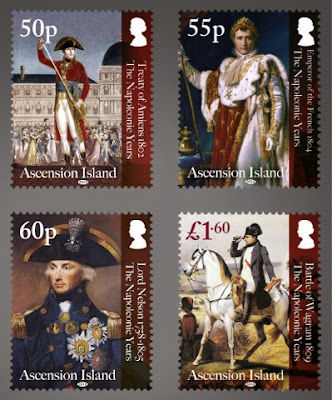 After all the new issue horrors described in the the previous Blog, what a relief to have one's mood lifted by Pobjoy Stamps/Creative Direction and the news that they are launching a set of 4 stamps as the second part of Ascension's Bicentenary of Settlement issue which came about because of the British need to fortify the island as part of the security to keep Bonaparte safely caged on St. Helena, his place of exile after his defeat at the Battle Of Waterloo. This issue covers events from the Treaty of Amiens in 1802 to the Battle of Wagram in 1809.
My only complaint about the issue is that it is running a little behind the story as it unfolded 200 years  ago. Principally, its date of issue on 28 April 2014 really coincides with the events that had seen the overthrow of the defeated Bonaparte during April 1814 - his first abdication in favour of his son on 4 April 1814 and his subsequent unconditional surrender on 11April and exile on the island of Elba and, at the end if the month on 26 April 1814, the landing of King Louis XVIII at Calais on his return to France from England. What a pity these events of April are not commemorated exactly 200 years later rather than the issue dealing with earlier events.
The stamps were designed by Andrew Robinson and lithographed by BDT International. The stamps are produced in an attractive arrangement as a sheetlet of 8 stamps with a depiction of The Battle Of Trafalgar in the margins:- 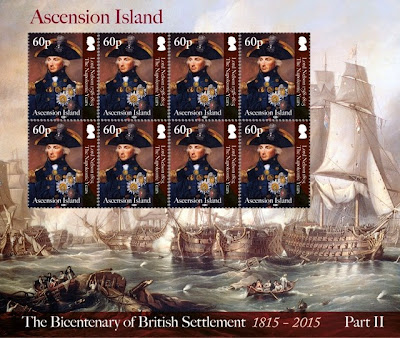 Meanwhile, news of yet another daft gimmick from Jersey Post. Six very attractive stamps and 1 miniature sheet will be issued on 6 May 2014 on the subject of "Remembrance" which coincides with the centenary of the beginning of the First World War. The watercolour painting stamps are designed beautifully by Katharine Asher though admittedly they are rather similar in idea to the previous British stamps featuring poppies and also on the subject of Remembrance:- 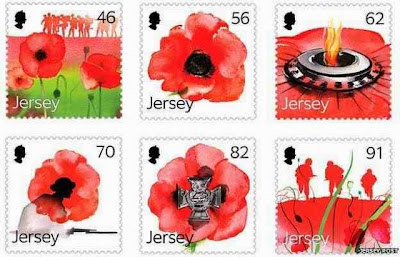 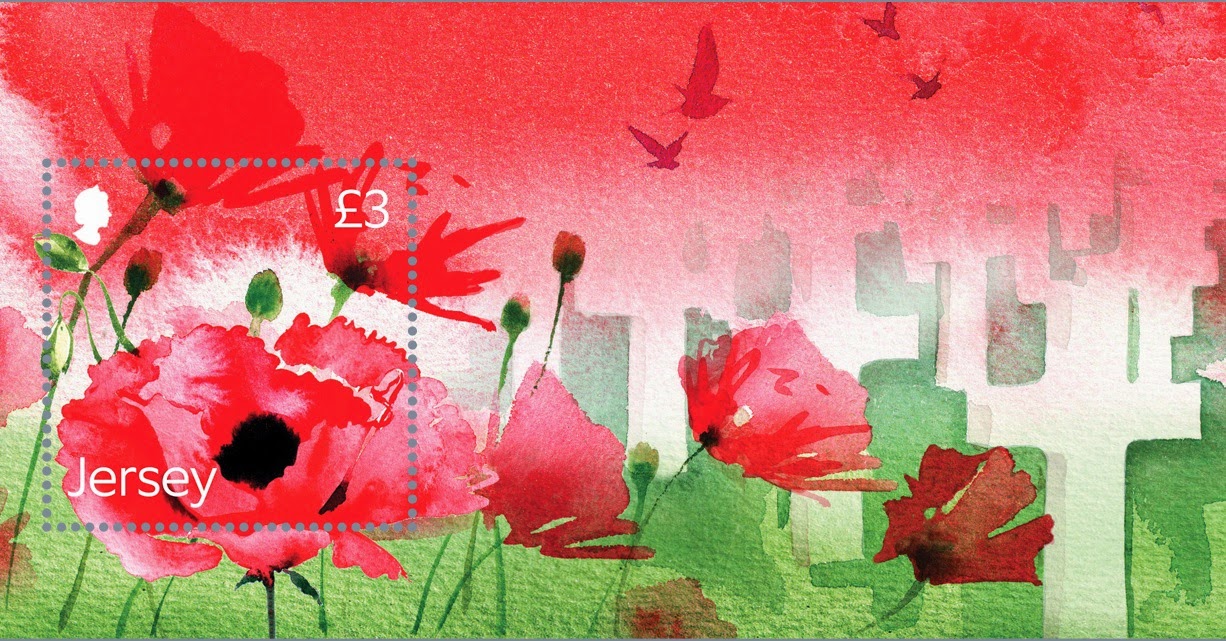 Royal Mail se-tenant strip of 3 stamps issued on 6 November 2008 to commemorate the 90th anniversary of the end of the First World War:- 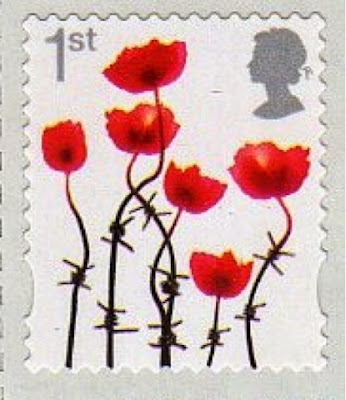 Sadly Jersey Post has chosen to include a gimmicky addition to two of these beautiful designs - the 2 lowest values will have real poppy seeds affixed to the stamps - I'm sure the excellence of these designs and their worthy subject matter makes them best sellers without the need to do this and one can not help but fear that these vegetative additions, while providing a talking point, will do little to enhance the appearance of the stamps themselves.
Jersey becomes the second Commonwealth territory to feel the need to stick seeds to its otherwise very satisfactory stamp designs - Trinidad And Tobago used a similar gimmick but with sorghum seeds on stamps which were issued at the end of 2013 (see Blog 366):- 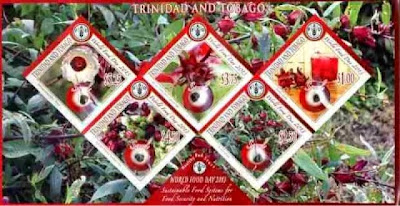 I now also illustrate the stamps which Jersey will issue on 23.April 2014 to commemorate the 450th anniversary of the death of William Shakespeare, an important anniversary which Royal Mail (as I have complained about several times previously) does NOT consider worthy of commemoration by the issue of British stamps. The Jersey stamps are certainly original if a little eccentric - I'm not sure what the recipient of a letter with a stamp depicting a dagger dripping blood (46p value) affixed to the envelope would think and even more so what fears a stamp with a human skull on it (56p) might cause if one receives a letter so adorned. The 62p and 70p also look rather bloody but at least things brighten up with the butterfly depicted on the 91p value. I have already depicted the accompanying miniature sheet in Blog 373. 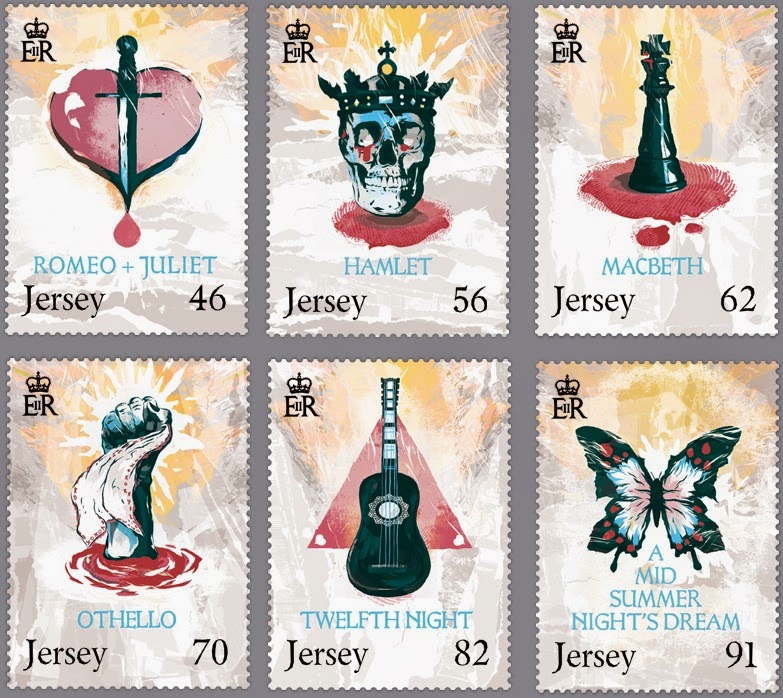 Returning to new issue announcements from Pobjoy Stamps, Ascension Island, Bahamas, Tristan Da Cunha and The Falkland Islands will issue stamps on 21 May 2014 to commemorate the christening of Prince George Of Cambridge. These will be the first issues of these four territories to feature the Prince as, unlike so many other postal administrations and philatelic agencies, these islands did not issue stamps to mark the birth of the Prince - an example of the restrained and sensible new issue policies these territories follow under the guiding hand of Pobjoy Stamps. All four sets of 4 (note, there are no overpriced miniature sheets to accompany the stamps) were designed by Andrew Robinson and lithographed by Cartor. The interesting designs of each territory do not only depict scenes of Prince George's christening but also scenes of the christening of his father, grandfather and great grandmother. An excellent series:- 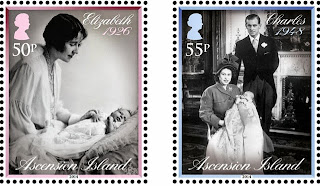 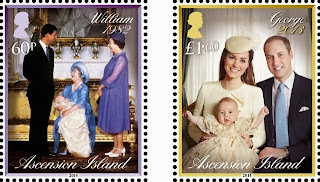 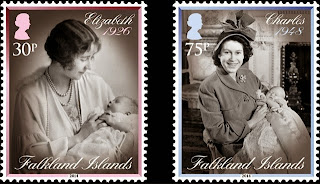 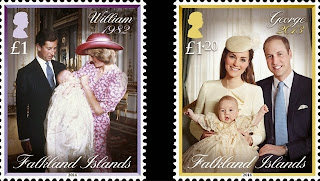 Canada Post will issue 2 se-tenant self-adhesive stamps printed in booklets of 10 (5 of each value) on 14 April 2014 to commemorate the centenary of the Royal Ontario Museum. The designs will also be combined in a gummed miniature sheet. The stamps were designed by Entro and lithographed by Lowe Martin:-

An issue will be released on 1 May 2014 which commemorates the centenary of the holding of the ship, the Komagata Mara, in Burrard Inlet, Vancouver, during which Canadian officials prevented over 300 passengers, mostly South Asians, from landing in Canada and eventually having the Royal Canadian Navy escort the ship away from the harbour. The date of issue will be the first day of Canada's "Asian Heritage Month". The self-adhesive stamp was lithographed in booklets of 6 stamps by the Canadian Bank Note Company and designed by Paprika:- 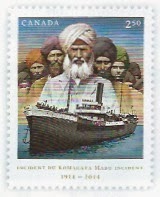 Two self-adhesive stamps will be issued on 23 April 2014 which depict roses. Things are not as simple as that since the stamps will be sold in booklets of 10 (5 of each stamp) and self-adhesive coils as well as in a gummed miniature sheet. The designer of the stamps is Isabelle Toussaint and the issue was lithographed by Lowe Martin.
One interesting thought about this issue is that the date of release is St. George's Day (patron saint of England among others) and the rose is the national flower of England so is there a secret Anglophile in Canada Post who put this little package together? Or is the combination of the roses and the date of issue Canada Post's unspoken tribute to the Shakespeare anniversary the subtlety of which is aimed at not upsetting Canada's French speakers - after all...a rose by any other name would smell as sweet. 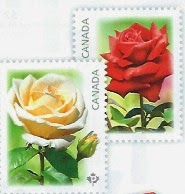