402. New Issues From The Commonwealth In Europe And Pitcairn. 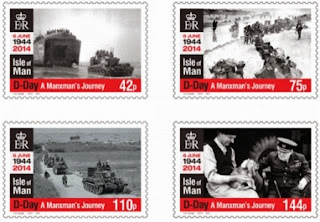 Isle Of Man has announced that yet another set of stamps will be issued in the near future - 6 stamps which commemorate the 70th anniversary of D-Day which will be released on 8 May 2014. The issue links itself to the experiences of Hector Duff, a Manxman who landed on the beaches of Normandy on 6 June 1944 and subsequently was involved in the advance into Germany all the way to Berlin. The stamps were designed by EJC Design and printed in lithography. 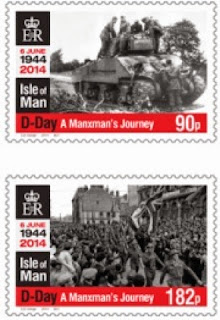 There will also be another one of those enormous sheetlets which are too big to display in most stamp albums which the people responsible for producing Isle Of Man's philatelic programme seem to think is a good idea (issued just a few days after 2 other similar items - see Blog 399) and which contains 15 stamps (including previously issued designs) and costs £8.78p. Since I can't work out what to do with these huge sheetlets I shall not be buying this one and will find myself £8.78p better off. 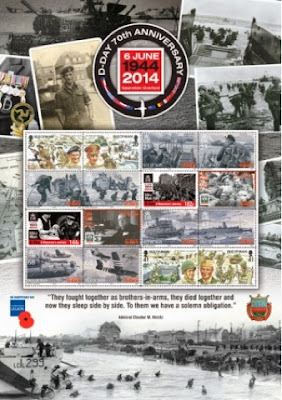 Meanwhile, Guernsey Post has announced that on 28 May 2014 it will issue a stamp denominated in the International Letter 20g rate which commemorates the fairly new hobby of postcrossing in which participants in different countries exchange postcards with each other. The stamp was designed by Bridget Yabsley and lithographed by BDT International:- 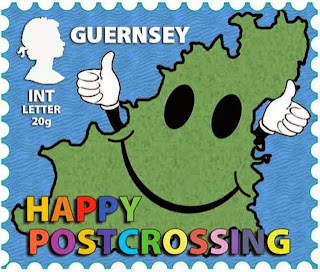 Guernsey will also issue a set of 6 stamps on 28 May 2014 which commemorates the 50th anniversary of "Britain In Bloom" and is Guensey's contribution to the 2014 SEPAC omnibus issue. The stamps were designed by Andrew Robinson and lithographed by BDT International:- 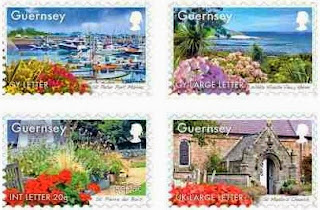 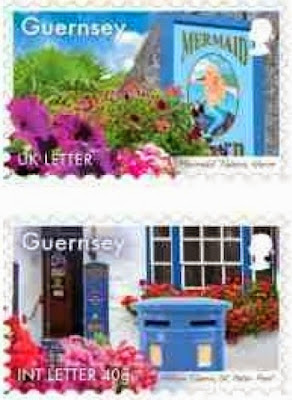 On 28 April 2014, Pitcairn will release a set of 4 stamps to commemorate the 225th anniversary of the mutiny aboard HMAV Bounty. 28 April 1789 was the actual date when mutineers, led by Fletcher Christian, broke into the cabin of Captain William Bligh and put him into the ship's open boat along with 18 loyal crew members and set them adrift. The mutineers sailed the Bounty on to Tahiti and from there sailed in search of Pitcairn which they knew to have been misplaced on Royal Navy charts. They landed there in January 1790 and burned and sank the ship in Bounty Bay. The stamps were designed by Lucas Kukler and lithographed by Southern Colour Print:-

Vexillological philatelists will like MaltaPost's new stamp issue due to be released on 30 April 2014 which commemorates the tenth anniversary of Malta's accession to the European Union. The stamp was designed by MaltaPost plc and depicts the Maltese national flag beside the flag of the European Union.
The EU's flag is rather nonsensical since the meaning of the design is that the blue field represents the sky (though why Europe needs to symbolise the sky which presumably is a feature of all the continents is a mystery) and that the 12 yellow stars represent "unity" though the number of stars is also meaningless since there are actually 28 members of the EU currently and there were 6 founder members. It is true that when the EU adopted the flag whose design was purloined from that of The Council Of Europe on 29 May 1986 there were then 12 member states but with subsequent accessions the number has long ceased to have any meaning. In Britain, and presumably elsewhere, the EU flag has been given the status of a national flag.
The stamp was printed in lithography by Printex of Malta:- 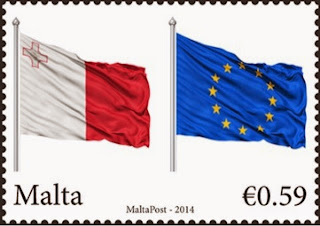 The latest issue of The Turkish Republic Of Northern Cyprus which was released on 12 March 2014 is on the subject of "The only witness was the Cumbez". The Cumbez is a sycamore fig and there is a large specimen of the tree in Famagusta on Cyprus beside the Lala Mustafa Camii Mosque; the tree is said to be 700 years old and to be the oldest tree on the island. The set is comprised of 4 stamps:- 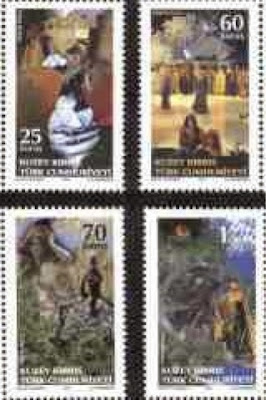