Australia Post will release its first issue to commemorate the beginning of the First World War on 21 April 2014 and the 5 stamps and miniature sheet deal with the opening events of the war in which Australia was involved.
The first stamp of the issue deals with the declaration of war by Britain and its Empire on Germany on 4 August 1914 in response to the German invasion of Belgium. Each stamp in the set is inscribed in the manner of a contemporary newspaper headline and so the first stamp has the dramatic inscription, "WAR DECLARED". The Australian government pledged that it would send 20000 troops to support Britain and the design depicts a line of volunteers queuing to be enlisted in the Australian armed forces.
The second stamp alludes to the first conflict of the war in which Australian forces were involved - the seizure of German New Guinea and with the inscription "AUSTRALIANS IN ACTION" the design depicts the Australian Military and Naval Expeditionary Force landing at Rabaul on 11 September 1914 - in just a little over a month a European war had spread half way across the world to the Pacific Ocean.
The third stamp, "TROOPS DEPART", shows Australian soldiers embarking on ships to carry them to Europe but they were diverted to Egypt where they trained in Mena Camp near the pyramids (4th stamp, "TRAINING MENA CAMP"). The 5th stamp depicts a studio portrait of 3 Australian troops, the design intended to represent "OUR BOYS", "the tens of thousands of young men who left Australia to fight in a war half a world away".
This set is the first of a 5 year programme of issues to be released by Australia Post to mark the country and its people's part played in the First World War. I think it is an excellent, meaningful, respectful and well-judged issue just like that Royal Mail issue which will be released later this year. The designs are by Tim Hancock and printing is in lithography by EGO.

Australia will also issue its 2014 "Occasions" stamps on 15 April 2014. The 10 designs are by Melinda Coombes, Stacey Zass, Lisa Christensen Gary Domoney, Sonia Young and Sean Pethick and printed in lithography by EGO:-

The stamps come in various formats - all stamps are available in gummed format and all designs apart from the 2 map stamps and the $1.40 value are also issued self- adhesive from $7 booklets of 10 x70c.
An Post, the Irish postal service, issued a single stamp on 3 April 2014 to commemorate the centenary of Cumann na mBan, an organisation which was set up to facilitate nationalist activism among women. The organisation was established in Dublin on 2 April 1914 as an auxiliary of the Irish Volunteers with the intention of aiding the arming of the men of the Irish Volunteers, producing anti-British propaganda and establishing a united front against British rule. The stamp was designed by Ger Garland and lithographed by Irish Stamp Security Printers:- 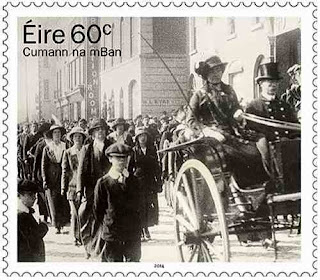