Pakistan issued a stamp on 6 April 2014 which commemorated the late H M Habib, a banker:- 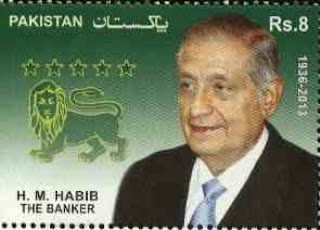 The first stamp issue of 2014 by Zimbabwe is a set of 4 stamps and 1 miniature sheet on the subject of export crops of Zimbabwe. The date of issue was 11 March 2014:- 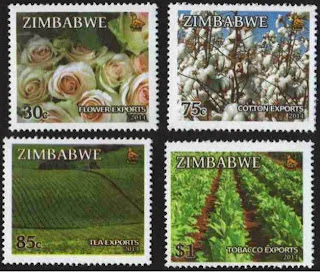 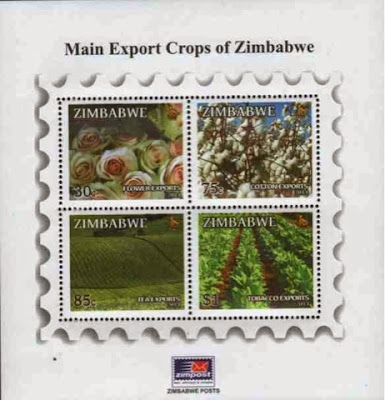 Gibraltar's Europa issue will be released on 2 May 2014 and its "national instruments" are actually instruments which are part of the British military forces stationed in Gibraltar - an interesting interpretation of the theme:- 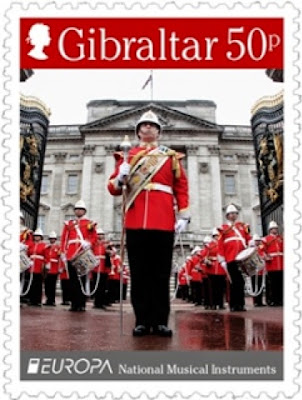 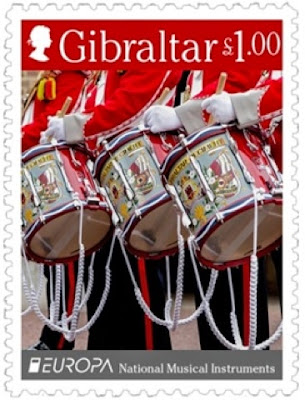 An Post, the mail service of Ireland will issue 2 Europa stamps on 8 May 2014 in the values of 60c and 90c but other details of the proposed issue are awaited.

Universal Mail United Kingdom has produced a large number of new airmail postcard stamps principally as bespoke stamps for English Heritage and other individual tourist attractions but there is also a series of booklets each devoted to a county in the south west of England (UK 0101 to 05) and to the Lake District (UK 0094). As always each booklet contains 5 self-adhesive stamps.
The subjects of the bespoke stamps are:- Audley End (UK 0081), Battle Abbey (UK 0082),  Carisbrooke Castle,(UK 0083), Dover Castle (UK 0084), Hadrian's Wall (UK 0085), Kenilworth Castle (UK 0086), Kenwood (UK 0087), Old Sarum (UK 0088), Osborne House ((UK 0089), Tintagel Castle (UK 0090), Whitby Abbey (UK91) and Wrest Park (UK 0092) (these are English Heritage issues), Cawdor Castle (UK 0093), Cortauld Gallery (UK 0095), Birmingham Library (UK 0096), Warwick Castle (UK 0097), Stratford-upon-Avon (UK 0098), Carrick-A-Rede (UK 0099) and HMS Victory (UK 0106). The non-bespoke "regional" issues were put on sale from 14 April 2014.
For some reason, while the English Heritage and Bespoke England issues have a depiction of the Union Jack and not the cross of St. George on them, the Cawdor Castle stamps depict the Scottish saltire and the Carrick-A-Rede issue depicts a generic view of the Northern Irish countryside in place of the Union Jack. The non-bespoke new English booklets stamps however include the English St. George's Cross flag in their designs rather than the Union Jack and feature:- The Lake District (UK0094), Wiltshire (UK0100)), Gloucestershire ((UK0101), Somerset(UK0102), Devon (UK0103), Dorset (UK103) and Cornwall (UK104). I can not understand why an organisation calling itself "English Heritage" rather than "British Heritage" would choose to place the Union Jack on its bespoke designs rather than St. George's Cross. Using flags (and maps) on stamps is always fraught with danger and a potential source of controversy - stamp designers never seem to learn that lesson.
Universal Mail United Kingdom sells the "Regional" counties of the south west booklets directly to collectors and they are now available to buy but the bespoke stamps must be bought directly from the organisations which have arranged for their production such as English Heritage which is a real pain and offers something of a challenge to those who wish to obtain them - it was described to me as going on a "treasure hunt". I was also told that as these new booklets have only just been produced it may several weeks before they are available to buy from the various sources so there is no point in rushing to order for a little while:-

Britain's second largest city, vibrant Birmingham, makes an appearance on UK 0096 with the booklet featuring the city's newly opened library which is a beautiful modern building and of great architectural merit. Other tourist attractions close to the great Midlands city are featured on UK 0097 and UK 0098:-

Having complained in several previous blogs because Royal Mail is not planning to issue stamps during 2014 to commemorate the 450th anniversary of the death of William Shakespeare I am pleased to see that booklet UK0098 will feature the beautiful Warwickshire town of Stratford-upon-Avon where Shakespeare was born and died and so even if Britain's main postal carrier has failed to acknowledge the important literary anniversary though it has commemorated, ridiculously, the 40th anniversary of the children's cartoon character, Bagpuss, at least Shakespeare makes an appearance on these Universal Mail stamps. The Royal Shakespeare Theatre in Stratford is depicted in the upper-most stamp, his birthplace on the 2nd stamp, a statue of the Bard on the 3rd stamps and Holy Trinity Church were his body is buried is shown on the fourth stamp. A very collectable stamp issue in this important anniversary year:-