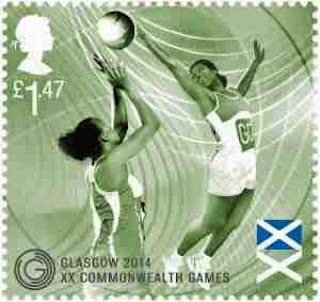 Royal Mail will issue a set of 6 stamps on 17July 2014 to commemorate the holding of the 20th Commonwealth Games in Glasgow in Scotland.  The stamps were designed by Nanette Hoogslag who is Dutch (why not choose a designer who is a citizen of one of The Commonwealth countries since the issue celebrates the Commonwealth Games?) and the illustrations are from photographs taken by a British newspaper photographer, Andy Hooper. The design of only one stamp has so far been released and further details are awaited.
The Commonwealth Games began their life as The British Empire Games in 1930 in Hamilton, Canada when 11 Empire teams participated in events in 6 different sports. England won most events as it also did in the Games held in London in 1934. The third British Empire Games were held in Sydney in 1938 but, because of the Second World War, the 4th Games were delayed until 1950 when they took place in Auckland, New Zealand.
The 5th Games held in 1954 in Vancouver, Canada were known as The British Empire And Commonwealth Games. The 6th Games were held in Cardiff, the capital of Wales, and stamps to commemorate the Games were issued for the first time by the British Post Office. The 3 stamps depicted below were issued on 18 July 1958 and were designed by Reynolds Stone (3d), WH Brown (6d) and Pat Keely and all printed in photogravure by Harrison And Sons (1/3d):- 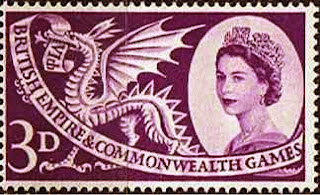 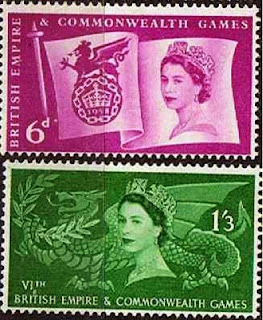 The seventh Games were held in Perth, Australia and 2 stamps were issued to commemorate the event on 1 November 1962. They were designed by RM Warner (5d) and G. Hamori (2/3d) and printed in photogravure by Harrison and Sons :- 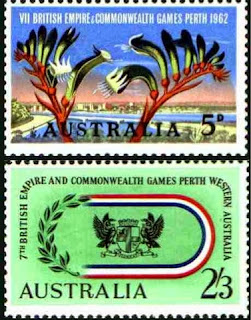 Jamaica was the host country of the 8th Games in 1966 and 4 stamps and 1 miniature sheet were issued on 4 August 1966 to commemorate the event. The issue was designed by Victor Whiteley and printed in photogravure by Harrison:- 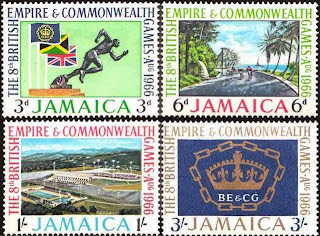 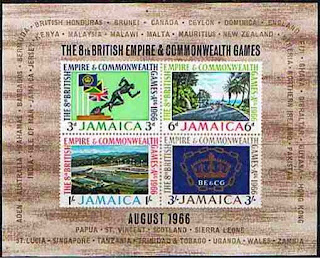 Subsequently, with the 9th Games which were held in Edinburgh in Scotland, the event was known as The British Commonwealth Games (the British Empire part of the title having been removed from the name). Three stamps were issued to commemorate the Edinburgh Games and they were issued on 15 July 1970 having been designed by Andrew Restall and delacryl lithograph printed by De La Rue:- 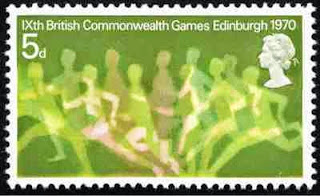 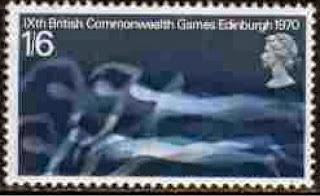 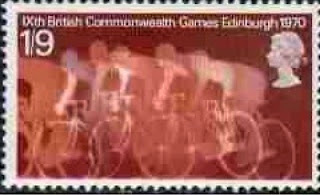 Subsequent games were held in Christchurch, New Zealand in 1974. These were the last Games to be known as the British Commonwealth Games - subsequently "British" was dropped from the name and the Games were called simply "The Commonwealth Games":- 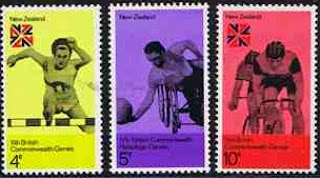 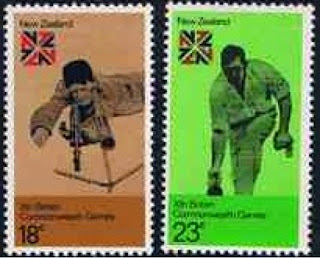 Edmonton, Canada in 1978. Two stamps were issued on 31 March 1978 which were designed by Mrs. S. Ash and lithographed by Ashton-Potter. Four further stamps were released on 3 August 1978 and they had the same designer and printer:-

Brisbane, Australia in 1982. Four stamps (3 x 27c and one 75c values) were issued with the three 27c values being combined in a miniature sheet as shown below. The designer was R. Carnielye and the stamps were printed in lithography by Leigh-Mardon:- 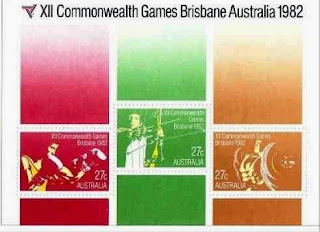 Edinburgh, Scotland in 1986. The thirteenth Games were commemorated by 5 colourful stamps which were designed by N. Cudworth:- 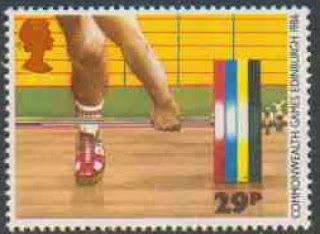 Auckland, New Zealand in 1990. Eight stamps were issued on 8 November 1989 followed by 2 miniature sheets on 24 January 1990. The issues were designed by Heather Arnold and lithographed by Leigh Mardon:- 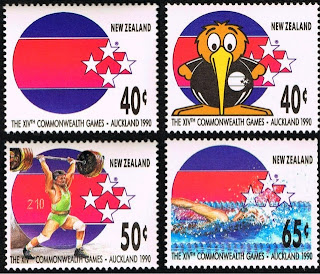 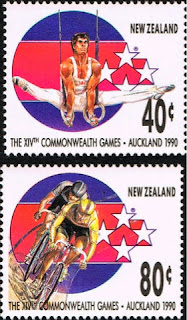 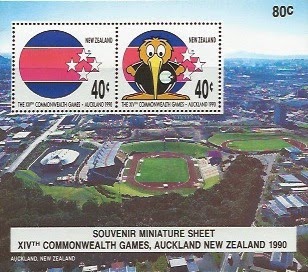 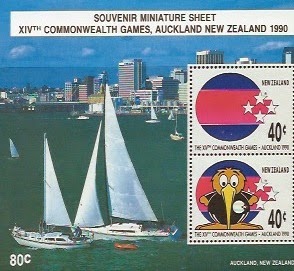 Victoria, Canada in 1994. In all 6 stamps were issued -a se-tenant pair as depicted below on 20 May 1994 and 4 further values (another pair of 43c and a 50c and 88c value) were issued on 5 August 1994. They were all designed by D. Coates and B. Roodenburg and lithographed with additional die-stamping by Leigh-Mardon:-

Kuala Lumpur, Malaysia in 1998. A souvenir sheet was issued on 23 February 1998 which depicted Games venues followed by sixteen stamps which were issued on 11 September 1998:-

Manchester, England in 2002. Five stamps were issued on 16 July 2002 and were designed by Madeleine Bennett and printed in photogravure by Enschede:-

Melbourne, Australia in 2006. A number of issues were made including sheetlets which commemorated Australian gold medalists:- 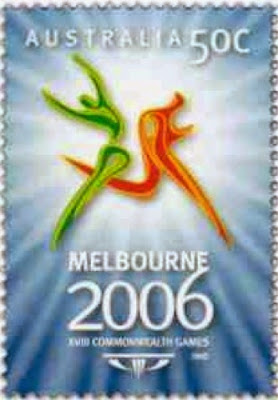 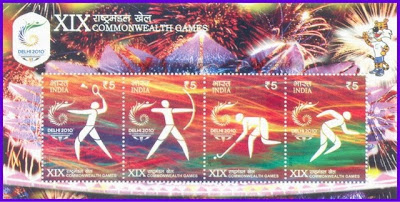 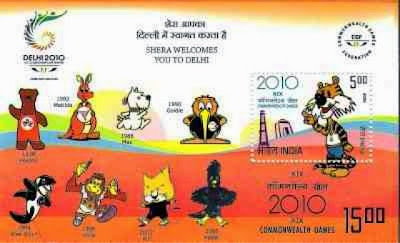 Apart from issues made by the host nations various Commonwealth countries at various times produced stamps to commemorate particular Games. An interesting Commonwealth Games collection can be built up at relatively low cost which will embrace stamps of almost the entire Commonwealth. The upcoming Glasgow Games issue is of particular interest since the Games take place a very short time before the referendum on Scottish independence will be held and if Scottish sportsmen are particularly successful in the Games the wave of nationalist pride which would result may well tip the balance in favour of a vote for independence. These may well be historically important games  which may result in stamp collectors having to collect a new Commonwealth country's stamps from 2016.
In Blog 366 I mentioned a $10 miniature sheet which has been issued by Grenada to commemorate the country's first post-independence prime minister, Sir Eric Gairey, and it appears that the sheet accompanied 4 stamps which depict Sir Eric's portrait (shown below).The low face value of the stamps and their locally relevant subject matter suggest that this set is actually meant to be used on mail in Grenada rather than aimed purely at the philatelic market:- 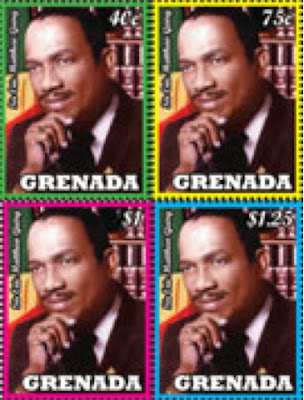 Sierra Leone has issued a sheetlet of 16 stamps (4 se-tenant blocks of 4 different designs) in the Worldwide Fund For Nature (WWF) series. This issue depicts a local antelope, the Western Bongo. I do not yet know the date of issue:- 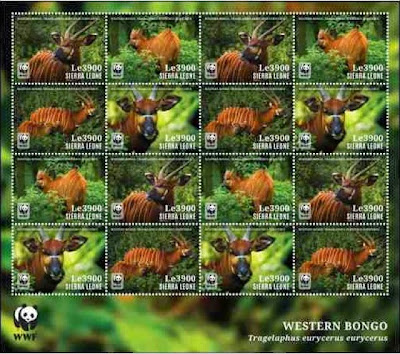 Although it is difficult to think of any good reason why the West African country of Sierra Leone needs to commemorate philatelically the Chinese New Year, its postal administration has indeed allowed its philatelic agents to issue stamps in its name to commemorate the event. There is a miniature sheet containing 3 different stamps which are shaped so that they make up a circle and this is accompanied by a Le 34000 (£4.68p) imperforate embroidered stamp which I'm sure will receive wide usage on mail in Sierra Leone (or not as the case may be). 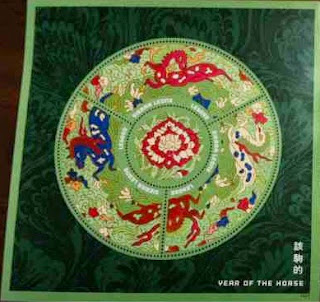 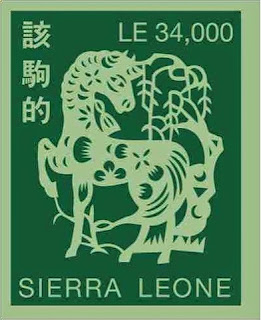