The Paralympic Games began in London with an opening ceremony on 29 August 2012. On the same day the British Post Office, Royal Mail, released a miniature sheet of 4 stamps as shown below. 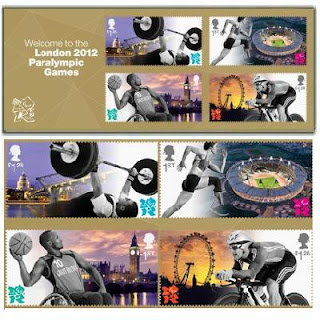 Although Royal Mail quite reasonably originally intended to issue a single miniature sheet to commemorate the British winners of gold medals during the Games, intense lobbying from pressure groups and the left wing and populist press put Royal Mail in a position where it appeared to be behaving in a discriminatory matter against disabled Paralympians in relation to able-bodied Olympian gold medal winners who of course had individual stamps produced to commemorate their achievements. Eventually Royal Mail was forced to announce that it would be indeed produce individual stamps for each British Paralympian gold medallist but this time in the form of miniature sheets of 2 rather than sheets of 6 stamps and not necessarily within 24 hours of the medallist's victory as was the case with the Olympians. Two gold medals were won by British team members on 30 August - Sarah Storey in the Cycling track women's C5 pursuit:- 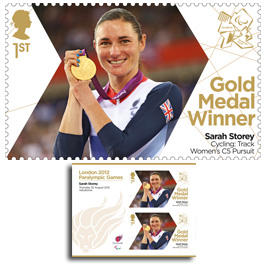 and Jonathan Fox in the Swimming men's 100m backstroke S7:- 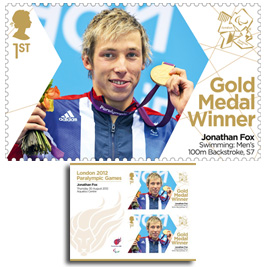 Storey and Fox won their medals on 30 August and Royal Mail had announced that the first issue of Gold medal winners stamps would take place on 1 September. However, without warning, the Storey stamps were released on 31 August so that anyone who had paid attention to the pre-announced issue date would have missed the opportunity to send a genuine first day cover. The Fox stamp did not appear until 1 September although by then 2 more gold medals had been won by British Para-athletes (on 31 August) but those were not to be issued until 3 September (though this date was not one of the original pre-announced dates of issue). It is all terribly confusing for stamp collectors particularly those who wish to send their own first day covers, in fact it really is quite chaotic.
The winners of gold medals on 31 August were Mark Colbourne (Cycling track men's C1 pursuit):- 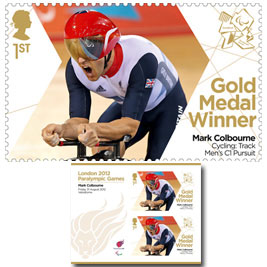 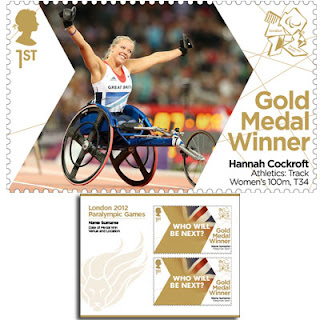 On 1 September, a gold medal was won by Neil Fachie (piloted by Barnie Stoney) in the Cycling track men's 8 km time trial. Like the winners of 31 August, this stamp is to be issued on 3 September, 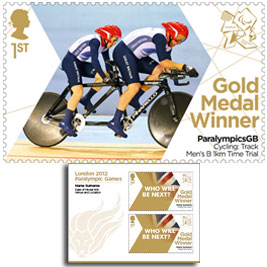 as is the stamp which commemorates the victory of Richard Whitehead on 1 September in the Athletics men's 200m T42 event:- 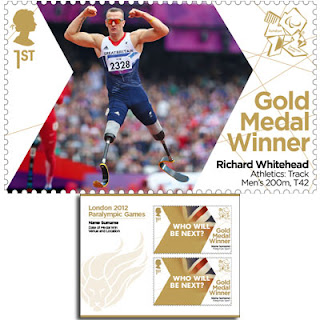 As with the Olympic gold medal winners stamps, there are 6 regional printers involved in the final printing of these miniature sheets. What a relief it will be when this is all over. If only Royal Mail had stuck to their guns and issued the single miniature sheet after the Paralympic Games was over to commemorate the medal winners as they originally intended rather than listening to sanctimonious, self-righteous people who are forever in search of a cause to embrace.