I can now show close-ups of some of the designs of some of the latest stamp issues to be produced by Universal Mail United Kingdom for use by tourists on postcards to abroad. The most notable is the stamp which commemorates the Diamond Jubilee of Queen Elizabeth II and which is produced in a booklet of 5 stamps, all of the same design. Anyone collecting the stamps issued to commemorate this royal event will really need to obtain this stamp or perhaps the complete booklet as a vital part of the collection. Although not catalogued yet by Stanley Gibbons, this is a proper international postage stamp as much as the issues of Royal Mail are. The booklet is numbered UK0060 and dated 06/12. 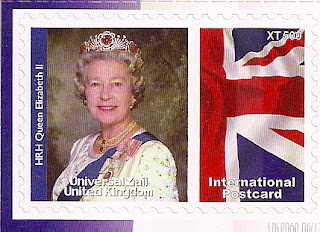 All other issues recently received are also dated 06/12 and the whole length and breadth of The United Kingdom is covered by the booklets. As before, the relevant national flag is included in the design so, as in the stamps below, the Scottish saltire appears in the booklets which are relevant to Scotland. Booklet UK0058, "Scottish Icons", contains 5 different stamps including a picture of a plate of the rather revolting Scottish national dish of haggis, tatties and neeps (offal,  boiled potatoes and turnips) with the adjacent design of two West Highland White terriers. 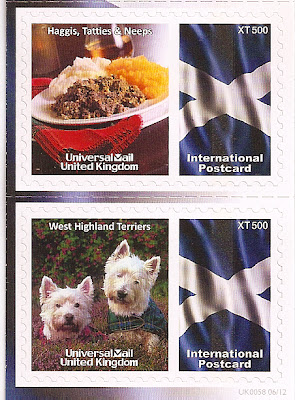 The national flag of England appears for the first time on a Universal Mail stamp in a series of booklets which represent various regions and important tourist sites of the country and for once we are spared any more views of London. Instead we have an interesting view of The United Kingdom's second most important city, the once great power-house of industry, Birmingham, which has many fascinating tourist attractions and, it has to be said, excellent restaurants and cultural venues. The stamp shows the medieval parish church of Birmingham, St. Martin's, in front of the futuristic Selfridges buiding, both of which are centred in the historic Bull Ring area, for centuries the site of Birmingham's great market. 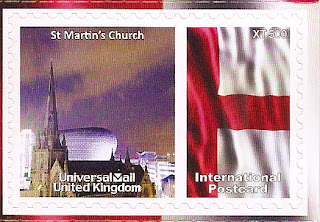 The stamp is one of five different designs featured in booklet UK 0048, "West Midlands", where a picture of another historic church, Worcester Cathedral, is to be found. This great religious building is depicted with the important River Severn flowing by it and inside the building the tomb of King John, possibly England's most villainous monarch, can be visited by tourists visiting the historic city. 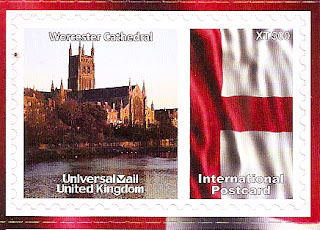 Another booklet, UK 0065, contains 5 different stamps which feature the Severn Valley railway which is therefore an item of great interest to collectors of stamps which depict railways. 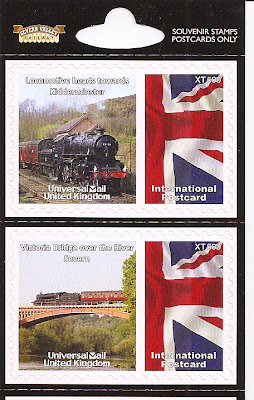 Meanwhile, another booklet in the Scottish series, UK 0057,  has 5 different illustrations of Scottish animals. all a lot more attractive than a plate of haggis and accompanying root vegetables. As well as the red deer (Britain's largest wild animal) and golden eagle depicted below, the stamps feature a Highland cow, 3 puffins and a Scottish Blackface sheep. 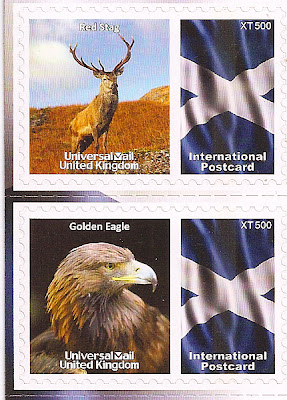 Another creature which appears in booklet UK 0062, "Inverness", is the Loch Ness monster, as it is depicted at Drumnadrochit:- 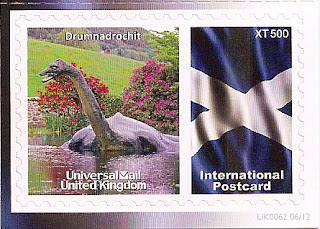 and among other famous British tourist attractions to appear are:- punting on the River Cam past King's College, Cambridge (from UK 0051, "Cambridge"): 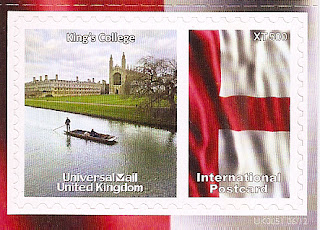 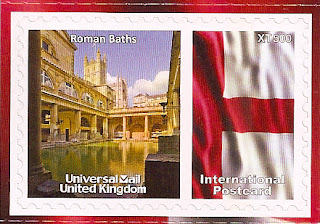 and Tintagel in Cornwall, said to be the site of King Arthur's Camelot (from UK 0047, "Cornwall and Devon"):- 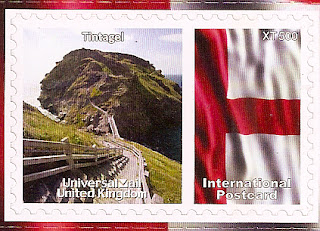 The current batch of issues include a single booklet for Northern Ireland (UK 0068) and 3 for Wales (UK 0055 and 56 and UK 0064). They are all very well produced and highly collectable in my opinion. Meanwhile, Royal Mail ignores British scenery on a set of stamps to be issued on 16 October 2012 and features scenes from much further away. Apparently, the first British satellite, Ariel 1, was launched from Cape Canaveral in 1962 and this issue commemorates the 50th anniversary of the event. The designs clearly tell you what they depict and are colourful and attractive although, priced at £5.30 per set, they are hardly cheap and fail to fulfill Royal Mail's promise of more modestly priced stamps, notably there is no second class value in the set. Why are we not surprised? 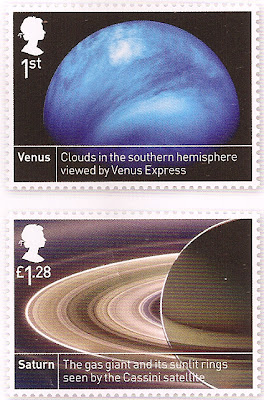 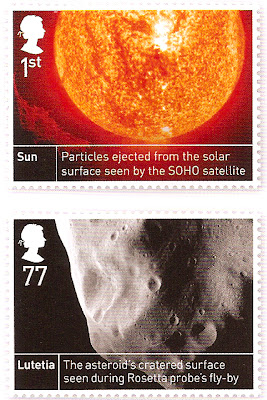 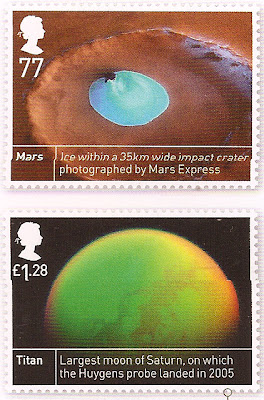