On 26 March 2013, Royal Mail will issue another set in its annual modern British cultural icons series which so far has brought us The Beatles (issued 9 January 2007), Harry Potter (17 July 2007), James Bond (8 January 2008), Design classics (13 January 2009), Modern "classic" pop music album covers (7 January 2010), the television programmes featuring puppets by Gerry Anderson (11 January 2011) and the children's books written by Roald Dahl (10 January 2012). These stamps are issued as an attempt to appeal to a wide cross-section of the British public rather than to stamp collectors and to try to persuade the public to buy the stamps as souvenirs of their cultural favourites which may be read or listened to or seen on television or at the cinema but they do at least depict subjects which play an important role in the modern British cultural identity. The set for 2013 will feature "classic British television" and is linked to the 50th anniversary of the BBC-produced programme "Dr Who". The programme is certainly a part of modern British culture and is particularly aimed at children although it also has some elements which make it tolerable for parents to sit and watch the programme with their children. It has even introduced new words into the English language - there are not many native British people who do not know what a "dalek" is or "a cyberman" or what the "Tardis" does. Royal Mail has previously issued a stamp to commemorate Dr. Who - it featured a photograph of a Dalek, one of Doctor Who's arch-enemies, which had been taken by the Queen's brother-in-law, Lord Snowden,  and was released on 1 June 1999 as one of a set of  4 called "The Entertainer's Tale", part of the Millenium stamps series. As the television programme is currently very popular in Britain, it is likely that the stamp issue will be popular with public (I suspect that there will be a set, a miniature sheet and a prestige booklet coming along). For those who can be bothered, there are a number of previous "Dr Who" items which may gain value as a result of the issue of this set in 2013. The piece de resistance must be a cover produced privately in 2000 which featured the first 7 actors to play the role of Doctor Who on the television and which had a 1999 "Dalek" stamp attached to it as well as the autographs of the 4 actors who were still alive then as well as facsimile signatures of those who pre-deceased the issue of the cover. 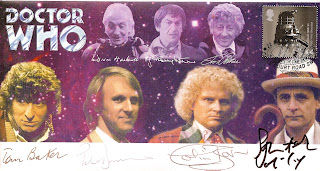 The cover was postmarked with a commemorative cancellation at Earls Court Road, London SW6 on 22 May 2000 and the postmark included the words "DR WHO VISITS THE STAMP SHOW 2000" (the 10 yearly international philatelic exhibition usually held in London),

Much earlier, in 1978,  covers were produced to commemorate the 25th anniversary of the first broadcast of Dr Who on the BBC. At least 2 versions exist with one being signed by Tom Baker who played Dr Who in the 1970's and the other being autographed by an actor called Sylvester McCoy who played the eponymous role in the 1980's. The covers were appropriately stamped with values from the memorable 1986 set which commemorated the return of Halley's Comet which had been beautifully designed by the cartoonist. Ralph Steadman. 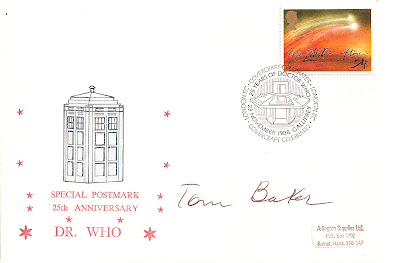 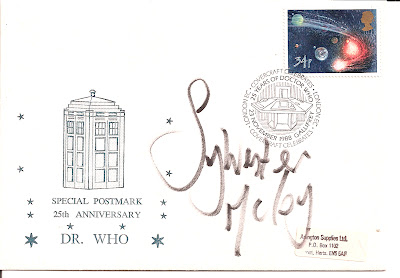 The postmark used on the cover depicted the control unit of Dr. Who's Time and Spaceship, the TARDIS, and bore the inscription "25 YEARS OF DOCTOR WHO 23 NOVEMBER 1988 GALLIFREY" as an inner circle and "COVERCRAFT CELEBRATES LONDON EC" repeated twice around an outer circle. Dr Who is a creature from another planet, Gallifrey, who feels particularly protective towards the Earth in general and Britain in particular - especially London - though presumably, having been at the London 2000 philatelic exhibition, he did not visit the dire exhibition of 2010 or else he may have felt differently towards the city. 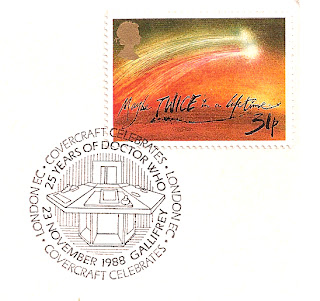 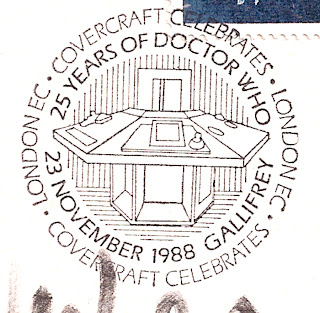 The sponsors of the postmark, Covercraft, produced their own cover, shown below, and they made use of, very appropriately, the 22p value of the set which had been issued on 24 March 1987 to commemorate the tercentenary of the work "Principia Mathematica" the mathematician and physicist, Sir Isaac Newton.

From 2005 to 2009 the Strand Stamp Centre produced sheetlets of stamps, in the Royal Mail Business Sheet format, which depict various aspects of Dr Who including labels which show some of the actors who have played the part:- 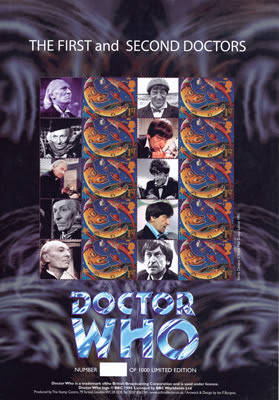 and, inevitably, the arch enemies, the daleks:- 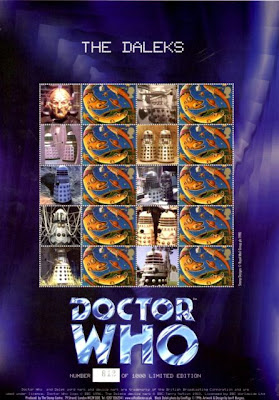 In my spoof British new issue programme for 2013 (see blog of 28 November 2011) I indicated that Royal Mail must surely issue stamps to commemorate this British icon figure who now has the same British cultural status as James Bond or Robin Hood. Hopefully in this new era of respecting the wishes of their customers, Royal  Mail will not exploit the anniversary quite as much as I, half-jokingly, suggested they might.