The final issue for the London Olympic and Paralympic Games to be released by Royal Mail is a miniature sheet of 4 stamps which will be sold from 27 September 2012. I cannot imagine how it is possible to decide which of the memories of the Games is the most worth recording on a stamp. Myself, I am disappointed that nothing from the opening ceremony of the Olympic Games is recalled by the sheet - several memories spring to mind from that first evening alone - the scene of the "forging" of the Olympic rings, the scene where England's green and pleasant land is transformed into the land of dark satanic mills with Kenneth Branagh's Isambard Kingdom Brunel grinning like a Cheshire cat at the triumph of industry which has been wrought on the land, the wonderful moment where the Queen really does meet James Bond, the dramatic lighting of the flame....I could go on. 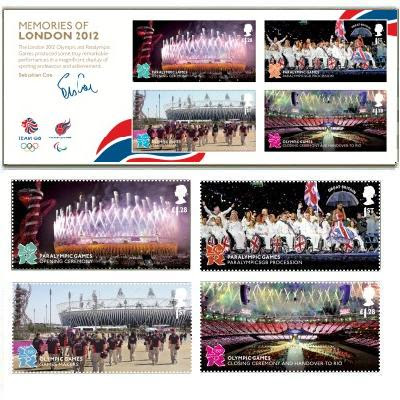 The designs actually depict a scene from the opening ceremony of The Paralympic Games (£1.28), the procession of Paralympians (1st), volunteers who helped with the Games, known as "Games makers" (1st) and the Olympic Games closing ceremony and the handover of the Games to Rio De Janeiro (£1.28). Meanwhile, a fourth Commonwealth territory is to issue stamps to commemorate its Olympic gold medal victory, following in the footsteps of Royal Mail, Australia Post and the Isle of Man Post Office - Grenada. Kirani James, who won his nation's first ever Olympic gold medal, thus becoming a national hero, is to be commemorated by a sheetlet of 3 stamps and an accompanying miniature sheet.

Although Grenada issues many stamps which have nothing to do with the country, no-one can complain about the release of this worthy issue or deny that the subject matter is of great interest to the little island and its population.
The designs of the issue from Tuvalu to commemorate the visit of the Duke and Duchess of Cambridge which marks the Diamond Jubilee of Queen Elizabeth II have been released. As well as a sheetlet of 5 stamps there will be a miniature sheet containing a single value:- 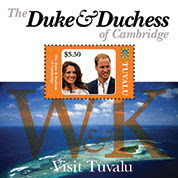 The date of issue is stated to be the 18 September and again, like Grenada, while Tuvalu issues far too many items which have no relevance to the country, this certainly is meaningful to the little country - royal visits there are very infrequent.