British Paralympians continued to win gold medals during the weekend meaning that there would be a large number of gold medallist stamps to be produced for issue by Royal Mail on Monday 3 September. In addition to the 2 winners on 1 September mentioned in the previous blog, 3 more British paraathletes had won gold medals by the end of that day. These were:-
Natasha Baker who was awarded the gold medal in the Equestrian individual championship test grade II:- 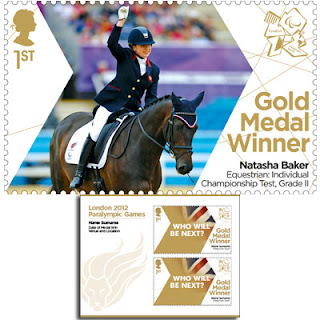 Sarah Storey, who won her second gold medal of the Games in the Cycling track women's C4-5 500m time trial:- 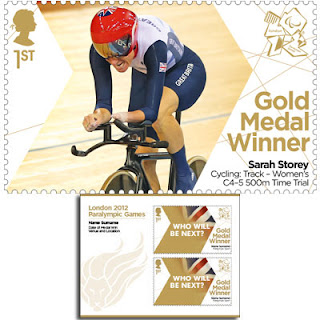 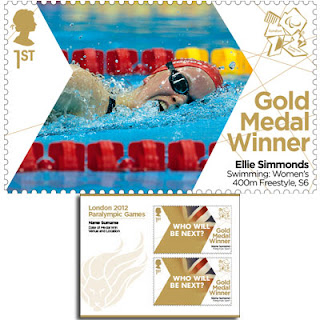 On Sunday 2 September, further gold medals were won by Pam Relph, Naomi Riches, James Roe, David Smith and Lily van den Broeke in the Rowing mixed coxed four LTA Mix4+ event (stamp design awaited) and by David Smith in the Athletics men's discus F42 event (stamp design awaited).
These are generally excellent stamps with a lot of action depicted - much better than the rather dull and unimaginative stamps which were issued by Australia Post to commemorate Australia's Olympic gold medallists which simply showed a portrait of the relevant athlete holding up his/her/their gold medal. As Australia's Paralympians are performing much much better than their rather limp Olympic team, perhaps Australia Post should urgently consider following Royal Mail's lead and issue Paralympian gold medallist stamps just as they produced some for the scanty number of Olympic gold medallists. The disabled Australian athletes seem to be putting on a much better show than their able-bodied colleagues and so probably deserve at least equal recognition. Or is Australia Post prepared to face any accusations of discrimination against disabled people that might reasonably come its way? It will be interesting to see.