Libya was divided into Italian Cyrenaica and Italian Tripolitania in 1927. In 1934, the Italian colonial government established the colony of Libya from the 3 elements of Cyrenaica, Tripolitania and Fezzan and resistance to the Italians was led by Idris al-Mahdi as-Senussi, the Emir of Cyrenaica up to World War II. By 1943, the Allies had occupied Libya and Great Britain administered Tripolitania and Cyrenaica and France administered Fezzan. The British used stamps in both Cyrenaica and Tripolitania from 1943 which were contemporary British definitives overprinted "M.E.F." (Middle East Forces). After the end of World War II, the British Military Administration introduced contemporary British definitives overprinted "B.M.A. TRIPOLITANIA" and surcharged in a currency - the Military Administration lira - which was abbreviated to "M.A.L.".  Thirteen values were produced in the format as shown below:- 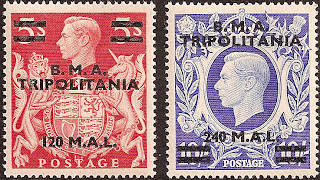 When a civilian administration was established, the format of the overprint was altered to "B.A. TRIPOLITANIA". The 13 values of the set were issued on 6 February 1950 and 8 further stamps were issued on 3 May 1951with the overprint to the stamps which were then in new colours. 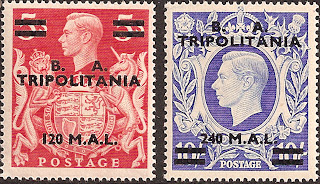 The MEF overprints were used in Cyrenaica until 16 January 1950 when a set of 13 stamps was issued which featured a "mounted warrior", as Gibbons Stamp catalogue puts it. The issued coincided with the recognition by the British government of Idris al-Mardi as-Senussi as Emir of Cyrenaica. The stamps were printed in intaglio by Waterlow and were in the currency of the Egyptian pound. 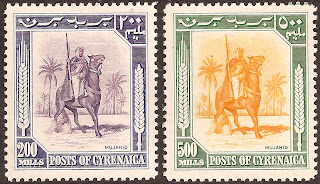 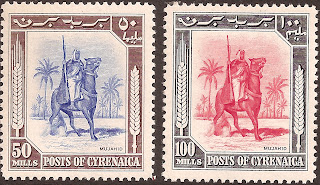 On 24 December 1951, Idris became the monarch of The United Kingdom of Libya as King Idris I and ruled the country until he was deposed in a military coup led by Muammar Gaddafi who then became ruler and changed the country's name to the "Socialist People's Libyan Arab Jamahariya in 1977.

Gaddafi became a monstrous tyrant but it was not until 17 February 2011 that a full-scale revolt against his dictatorship began. The opposition National Transitional Council was established on 27 February 2011 and over the space of the following months, the rebel forces gradually took over more and more of the country, aided most importantly by the British and French who enforced a no-fly zone over Libya which largely prevented Gaddafi's aircraft from attacking the rebel forces. By 22 August 2011, opposition forces had entered Tripoli, the capital,  and Gaddafi himself was captured and killed in his home town of Sirte on 20 October 2011. The "liberation" of Libya was celebrated on 23 October 2011 and the 5 stamps which are depicted at the head of this piece were issued. The designs show a map of Libya coloured as the re-adopted national flag, which originally had been flown during the reign of King Idris but which was eventually replaced by an all green flag by Gaddafi on 3 March 1977 when the Jamahariya was established. I have added these stamps to my collection as they reflect a highly important event in world history and make an interesting footnote to my collection of stamps of the British occupation of former Italian colonies in north Africa as well as recalling the continuing links between Britain and Libya as reflected in the British aid to the anti-Gaddafi forces.
Changing the subject entirely, I have obtained from an ordinary new issue dealer, the sheetlet and miniature sheet produced for Guyana which claims to celebrate the 75th anniversary of the succession of King Edward XIII. This terrible and embarrassing design error was corrected to "Edward VIII" on the website of the New York-based philatelic agency which produces these stamps but clearly they must have distributed some of these monstrous errors to dealers. This terrible design error is an embarrassment to the Guyana Post Office which allows this agency to produce stamps with its country's proud name printed on them but given the constant flood of items produced by the agency, it is not surprising that such such fundamental errors of design occur without any one noticing or bothering to correct them. After all, there is still a profit to made no matter how poor the quality of the product produced. 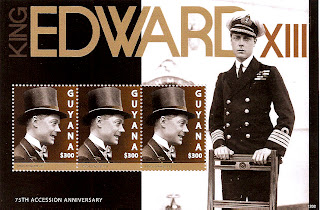 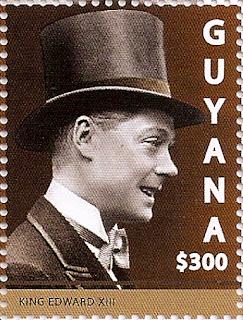 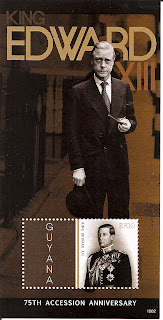