On 5 June 2012, Australia issued what I think is the most original and fun London Olympic Games stamp issued so far and not a single sport featured in the design. With iconic London landmarks featured in the background a bold, red London double-decker bus is shown in the foreground. It is not easy to come up with an original approach to an Olympic Games stamp design after the many thousands that have been issued over the years but Australia has come up trumps with this modest little stamp. I think it could well prove to be the best design to commemorate these Games and is available in gummed format from ordinary sheets and self-adhesive from booklets. Three more gummed stamps and 3 self-adhesive stamps will be issued by Australia on 17 July 2012. 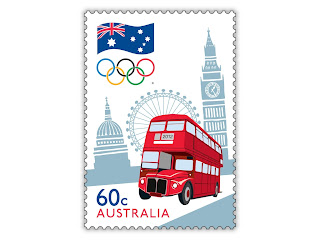 Also issued by Australia on 19 June 2012 were two $2 gummed stamps and 1 miniature sheet which commemorate the country's colonial heritage. I particularly like the design on the left which is taken from the 1850 New South Wales "Sydney View" stamp which was based on the design of the Great Seal of the colony and which featured the allegorical figure of Industry greeting convicts or colonists on their arrival to the territory and symbolising the new arrivals' path to redemption and the colony's road to advancement. As mentioned in a recent blog about the bicentenary of Charles Dickens, this particular image recalls the Micawbers who set out for Australia to make their fortune and the convict Magwich whose success there was so great, that he was able to bestow on Pip Pirrip the gift of "Great Expectations", even though it dramatically all ended in tears when he returned unlawfully to England. 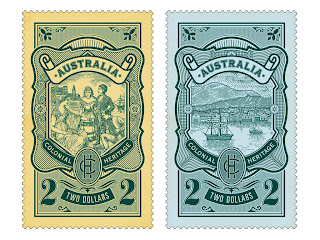 The second design depicts the port of Hobart from a design of 1890. With sailing ships in the harbour, a picturesque scene was aimed at promoting Tasmania's natural beauty and influencing potential visitors to the colony. 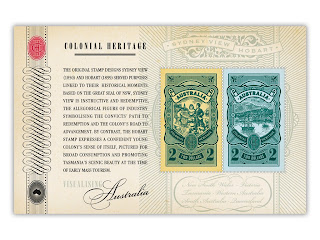 In a blog a while ago, I drew attention to a personalised stamp design produced by New Zealand Post which appeared to have reference to Vietnamese revolutionary forces, the Viet Cong, whom New Zealand soldiers found themselves fighting during the Vietnam War. I wondered if the individual featured on the stamp was Ho Chi Minh. Apparently, the stamp actually depicted Phan Boi Chau (1867 - 1940) who was a pioneer of 20th century Vietnamese nationalism and who formed a revolutionary organisation, Duy Tan hoi - the "Reformation Society" - in 1903 and whilst living in Japan, wrote political tracts calling for the liberation of Vietnam from the French colonial regime. The French kidnapped him in Shangai in 1925 and he spent the rest of his life kept under house arrest by the French in Hue (comparison with the Burmese leader Ang San Suu Kyi sounds rather appropriate here given her long period of house arrest by the country's military regime). 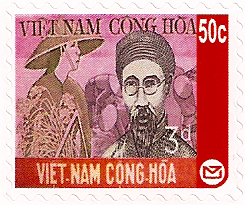 I found the identification of the individual on the stamp in an article by Glen Stephens in the July 2012 Philatelic Exporter and in the same article he draws attention to another New Zealand Post personalised stamp which was produced in 2009 by them for Bruce Henderson which marked the 50th anniversary of Tibet's struggle for independence from The People's Republic Of China. The stamp depicts the national flag of Tibet but annoyingly was not included in the 2009 personalised stamp collection because of the political nature of the subject of the stamp and indeed New Zealand Post wished the stamps to be returned to them. It seems likely that this was all due to the fear of upsetting the Chinese government. 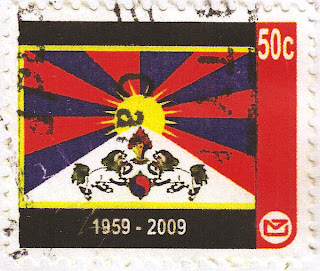 Any logical and reasonable person will fail to understand the difference between the Tibet item and the Phan Boi Chau stamp since they both appear to have highly political subjects and such controversies are typical of what happens when a postal administration finds any excuse for producing stamps to drag money out of stamp collectors in particular, and the mail sending public in general. Remembering the Athens Olympic Games, we recall that the Greek Post Office was forced to withdraw a "Gold Medal Winners" stamp days after it was issued after the commemorated athlete was stripped of his medal for contravening the rules. One only hopes that Royal Mail will not experience a similar problem with its upcoming next day Gold Medal Winners miniature sheets otherwise those who are subscribing to the set which will be sent out after the Games are finished, will find that one or two of the sheets will not be included in the distribution and that they will then be faced with tracking down a rare item at great cost. Have Royal Mail thought about that I wonder? Another recent problem item is the Samoa "Leap into the Future" issue which consists of two stamps produced as a pair with a label between them.

A fascinating error, well worth including in one's collection. I managed to track an example after finding advertised on the internet by Sydney Philatelics. I have yet not seen a British dealer offering it.