In the next few days three Commonwealth countries will issue sets of stamps which depict wildlife locally endangered in each participating country and bear the World Wide Fund For Nature "panda" emblem. I mentioned the Ghana issue last time for which there is no exact issue date currently reported. The issue which depicts the Bohar Reedbuck also includes a miniature sheet of 2 sets of each value which is a format we frequently see with these issues and I depict it below:- 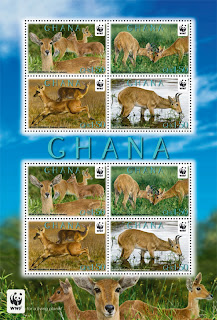 There is no doubt that these issues are frequently attractive and since they show local creatures and therefore a subject of relevance to the country issuing the stamp I usually like to include them in my Commonwealth collection. It is interesting that this Ghanaian issue is typical of those produced by client countries by the large agency in New York and together with the subjects and types of stamps now being produced by Ghana (as described last time), we can see that agency is once more in the driving seat when it comes to Ghanaian new issues. Typical of the issues produced by New Zealand Post for its client countries is the gorgeous sheetlet of 8 WWF stamps to be issued by Fiji on 11 July 2012. The beautiful Collared Lory is the creature featured on this set.

The stamps are produced as 2 se-tenant strips in the sheetlet as demonstrated below:- 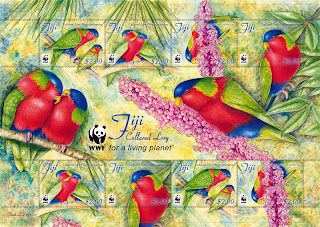 On the same date, 11 July 2012, Kiribati is also due to issue a WWF issue, again in the format of 2 se-tenant strips of 4 stamps in a sheetlet of eight. This issue breaks the recent run of old Kiribati stamps being overprinted and/or surcharged to produce new commemorative stamps as has previously been reported. This issue features the Giant Trevally and is designed by JR Lisiak which is one of the designers that New Zealand Post use when producing stamps for its client territories - he recently designed the lovely Pitcairn Islands' dolphins set and miniature sheet which was issued on 26 April 2012. I have not seen any announcement but I wonder if New Zealand Post has taken over the production of Kiribati's stamps which I would certainly welcome since they produce some of the best new issue stamps around at the moment and it would mean that Kiribati would not fall into the hands of some of the agencies which have been moving in on the Commonwealth Pacific territories and who have been less restrained in number of stamps issued and in the face value of the stamps. New Zealand Post issues are almost always relevant to the countries for whom the stamps are produced and are usually extremely attractive and well designed and printed.