Australia First Off The Blocks With Gold Medallist Stamp. 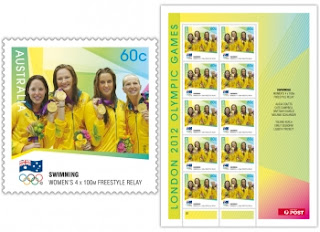 While Royal Mail has so far been frustrated in its hopes of cashing in financially from the success of British athletes at the London Olympic Games simply because no member of Team GB has yet won a gold medal, the cash tills have started ringing for Australia Post as they have been able to issue their first gold medallist stamp after 4 Australian women won gold medals for the 4 x 100 metres freestyle swimming relay on Saturday 28 July. The stamp was printed in sheetlets of 10 and only made available in that form (a cost of $6.00 rather than 60c!). The sheets were issued on Sunday 29 July and feature the four members of the relay team - Alicia Coutts, Cate Campbell, Brittany Elmslie and Melanie Schlanger - and the stamps are in the same format as the gold medal winner stamps which were issued during the Sydney and Beijing Olympic Games. In the philatelic gold medal table that's Australia $6, Great Britain £0. Perhaps today (Monday) will provide Royal Mail with its first opportunity to start to milk the stamp collector cash-cow or will it again be a case of Australia getting the cream? 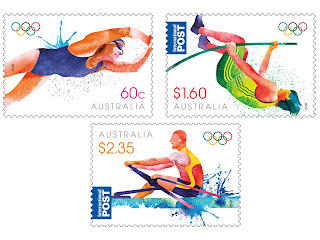 Australia's second stamp issue for the London Olympics, 3 gummed stamps from ordinary sheets and a booklet of 5 x $1.60 self-adhesive stamps, was issued on 17 July 2012 and is illustrated above. They were designed by Johnathan Chang and printed in lithography by McKellar Renown.