The fifth of the Canadian Diamond Jubilee miniature sheets is interesting in its attempt to reproduce the 1897 Queen Victoria Diamond Jubilee stamp by placing side by side as in the 1897 issue, portraits of Queen Elizabeth II which date back to the beginning of her reign and one which is contemporary. The stamp was issued on 7 May 2012 and I find the contemporary portrait to be rather uncomplimentary towards the Queen making her look decidedly chipmunkish although it is nicely printed in intaglio, 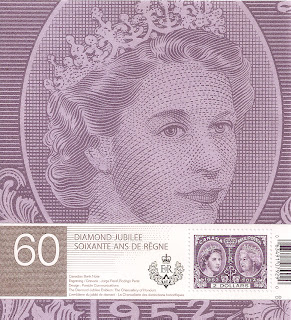 Meanwhile, another pair of monarchs makes an appearance on a Commonwealth stamp, this time the King and Queen of Thailand on a stamp which commemorates the 50th anniversary of their state visit to Pakistan. As Pakistan has issued a stamp featuring a foreign monarch, one wonders if the country's post office may issue a stamp to coincide with the Diamond Jubilee of Queen Elizabeth since she is Head of The Commonwealth, was Queen of Pakistan from 1952 to 1956 and with hundreds of thousands of Pakistanis and their descendants living in Britain, there are clear links between The Queen, Great Britain and Pakistan. 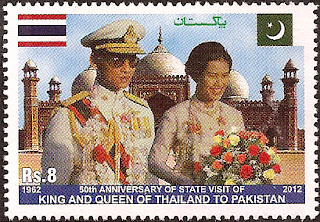 The interesting locally relevant issues of Papua New Guinea continue to appear. On 2 April 2012 an interesting and unusual aspect of the country's culture was depicted on 4 stamps, a sheetlet of 4 stamps and a miniature sheet which all illustrated various local clay pots. I wonder if any of these will ever appear on a PNG version of the Antiques Road Show. 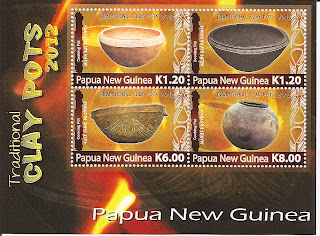 Given that most stamps which appear with Tuvalu's name printed on them have no relevance whatsoever in subject matter to the country, there is no arguing that the theme of an issue of 12 May 2012 is of extreme relevance to Tuvalu. The set of 5 stamps which was issued to coincide with Yeosu World Expo 2012 illustrates 5 different ways to help reduce the damage caused by global warming by which the future existence of Tuvalu as a country is severely threatened. Three of the designs are featured below. Although I rarely obtain Tuvuluan new issues, this is one set which I can justify adding to the pages of my collection.

Finally, Malta Post has released details of its Olympics issue which takes the form of a miniature sheet containing 2 stamps showing the Games' logo and one of the mascots. The item will be issued on 27 July 2012, the day of the opening ceremony. 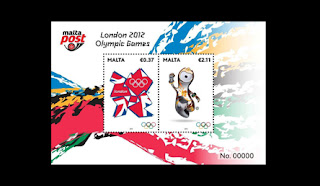