After the brilliance of the opening ceremony of the Olympic Games in London, British hopes of early medal glory were dashed when Mark Cavendish of The Isle Of Man failed to win a medal in the cycling road race. In fact Britain ended the first day without a single medal. Philatelists benefitted because it meant that a whole day went by without them having to buy a "Gold Medal" winners miniature sheet (£3.60p saved) and interestingly it meant that the 500+ post offices throughout the country that had been designated for sale of these miniature sheets did not have to open on the first Sunday of the Games in order to sell the items. The Isle Of Man Post Office, always keen to find ways of milking money from stamp collectors, perhaps rather prematurely had issued 7 stamps and a gigantic sheetlet on 19 June 2012 to commemorate Cavendish. He has achieved a great deal in competitive cycling and doubtless deserved the honour but the timing of the issue was unfortunate given his failure just 6 weeks later to win a medal at the Olympic Games. A case of philatelic hubris, I think, leading to inevitable failure. 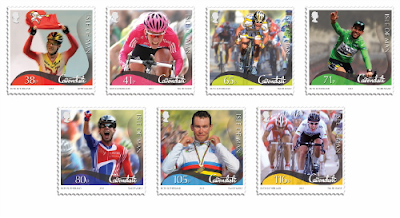 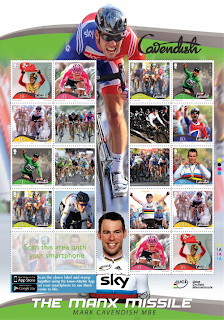 The Isle Of Man Post Office has a track record in commemorating living individuals to make money from contemporary events - the most obvious case is that of the set of 6 stamps and a miniature sheet which were issued on 15 January 2009 which noted the Formula 1 motor racing victories of Lewis Hamilton who has no connection with the island apart from the fact that he moved to Switzerland from Britain, partly to avoid paying British taxes and The Isle Of Man likewise provides a haven for those who do not wish to pay their fair share of taxes. Anyway, it was not long after the issue of these stamps that Hamilton was disqualified from the Australian Grand Prix in 2009 having given "misleading evidence" about his actions during the race at a post-race stewards's hearing. It raised the question of the wisdom of issuing stamps which commemorate living persons who may in the future behave in a shameful way, as in Hamilton's case, or may not be as successful as they are expected to be, as in Cavendish's case.

Royal Mail issued a miniature sheet on the day of the Opening Ceremony of the Games, 27 July. It is an excellent item, cleverly combining 4 different sports with iconic views of London. 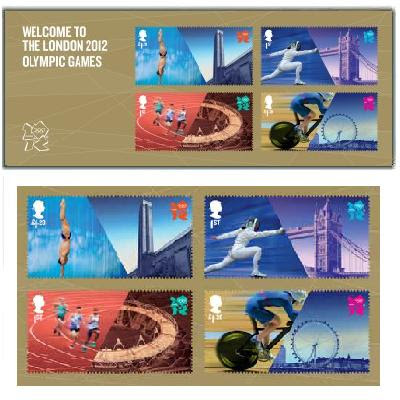 I was fortunate enough to be one of the spectators at the Opening Ceremony and found it to be a fantastic and highly memorable evening. I loved the opening segments which saw England's "green and pleasant land" transformed by the industrial revolution into a near-nightmare scene of factory chimneys belching smoke and "dark, satanic mills" as the people left the gentle countryside to make their fortune in the burgeoning cities such as Birmingham and Manchester where the country's wealth was generated which brought us to the modern Britain. It was a wonderful overview of Britain's social history of the past 300 years.

The two stamps depicted above beautifully echo the theme of the Opening Ceremony and are both from the 1999 Millenium set (one of 4 stamps issued on 7 September 1999 entitled the "Farmer's Tale" and one issued on 12 January 1999 entitled "The Inventor's Tale"). Stamps can never fully invoke the real drama of the Opening Ceremony, their small size can hardly give the impression of the size of the stadium, the sheer spectacle, the noise - I found the moment when hundreds of drummers appeared banging and shouting to introduce the Industrial Revolution to be astonishing and thrilling, the heat from the huge fires as the foundries "forged" the 5 Olympic rings so spectacularly and of course the wonderful moments of comedy when Mr. Bean did his best to ruin the performance of the theme from "Chariots Of Fire" and, most memorable of all, the appearance of Queen Elizabeth herself in a scene with James Bond.

Royal Mail will issue a miniature sheet after the Games to commemorate the most notable memories from the Games. I can not imagine how they will decide what to include in the set since the Opening Ceremony alone had enough great memories for a dozen miniature sheets. 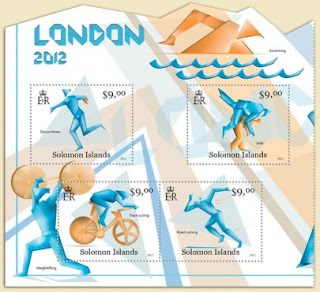 A further 12 issues have been produced with the name of The Solomon Islands printed on the stamps and miniature sheets and these include a sheetlet of 4 stamps and a miniature sheet and an item which combines the sheetlet and miniature sheet which commemorates "London 2012" and depicting strange portrayals of various sports. The implication of these items is that they commemorate the London Olympic Games but they avoid including the words "Olympic Games" or any relevant logos in their designs so that they escape the need to pay any fees for the use of such design features. 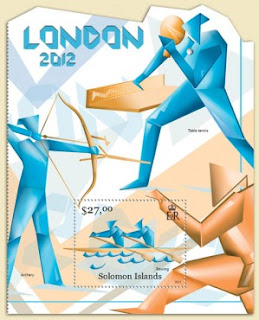 The other sets produced with the above "issue" are "owls":- 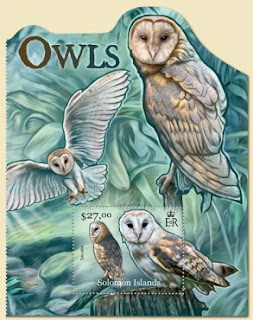 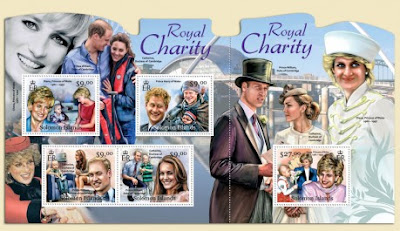