Vanuatu joined the growing list of Commonwealth countries which have issued stamps to commemorate their diplomatic relations with The People's Republic Of China by issuing a sheetlet of 12 stamps, all of the same design, on 26 March 2012. The design features a giant panda and a boar (a boar's tusk is one of the items featured on the national flag). The particular reason for this issue is the occasion of the 30th anniversary of diplomatic relations between the 2 countries. I suspect this stamp was prepared and printed in China as so many other of these Diplomatic Relations stamps are and given as a gift to Vanuatu Post. The Chinese seem to understand more than anyone the value of stamps as propaganda in these modern times. 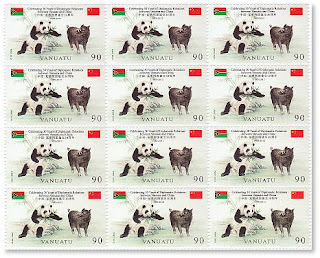 Vanuatu issued 12 stamps and a miniature sheet as a new definitive series on 2 May 2012. They were designed by Donna McKenna and lithographed by Southern Colour Print of New Zealand. As can be seen in the illustration below, the stamps are excellent in the standard of their design and printing as we have come to expect from countries which are client states of New Zealand Post. It looks as though whenever a new definitive set is issued we must now also expect to have to buy an accompanying miniature sheet which incorporates all the values, including the very high face value ones, if a respectable philatelic country like Vanuatu has climbed on to that particular band wagon. 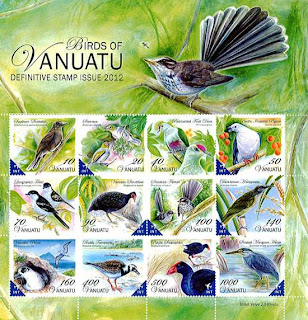 The latest Vanuatu issue is a set of 4 stamps on the popular theme of horse racing which was issued on 12 July 2012 and which commemorates the Kiwanis Charity Race Day in the islands. They are four more excellent stamps, designed by Denise Durkin and again lithographed by Southern Colour Print. 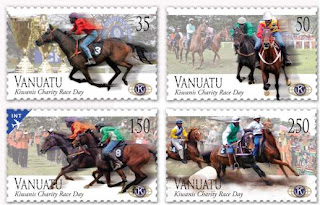 One cause for concern is that the Vanuatu Philatelic Bureau is selling off their stock of stamps issued before May 2010 at a discount of 25% from "normal retail price". Normally they withdraw stamps from sale 2 years after their date of issue. This "special 'off sale' promotion" only runs until 31 July 2012 but clearly devalues any of these older stamps that collectors may have bought. Clearly new issue sales are not good as we expect in the current financial climate and post offices need to take measures to increase their profits in the face of poor sales but this example illustrates than anyone who buys new issues because they see them as a source of financial investment rather than just for the pleasure of stamp collecting may well find themselves disappointed.
Posted by White Knight at 00:24