5 September 2017 - Heard Island. 4 gummed stamps and 1 miniature sheet. Designed by Melinda Coombes of Whitechurch Coombes Design and lithographed by EGO and perforated 14.5.
This issue is interesting in that Heard Island is part of the external Australian Territory of Heard Island And McDonald Islands. There is nothing to suggest that this is the first issue of a new philatelic entity and the islands are not in need of a postal service since the islands are uninhabited by humans. However, the absence of a human population has not previously been a bar to the issue of stamps in the case of one or two philatelic entities so who knows?
As yet another ordinary issue of Australia and as it does not commemorate a relevant anniversary or event I shall not add it to my collection and give it a rating of * only.

A single stamp in gummed and self-adhesive formats will be issued on 12 September 2017 to commemorate the 50th anniversary of the first Australian satellite, WRESAT. This commemorates a notable anniversary for Australia so I will add it to my collection but the design is not too exciting. The stamp was designed by Nigel Buchanan and lithographed by EGO and perforated 14.5 x 14. Rating:- **. 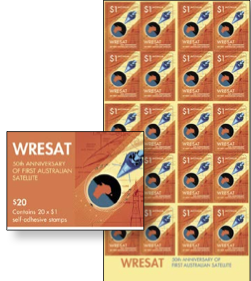 Australia Post will issue a set of 3 stamps and 1 miniature sheet on 19 September 2017 with the inscription "Australian Antarctic Territory" on the subject of Australian cultural heritage connected with Antarctica. The issue was designed by Lynda Warner and lithographed by RA Printing and perforated 14.5 x 14. Rating:- **. 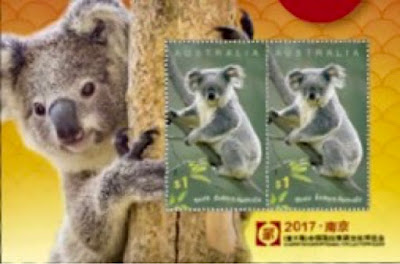 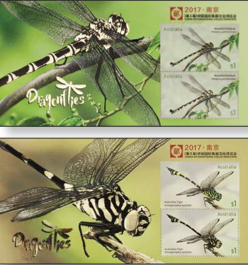 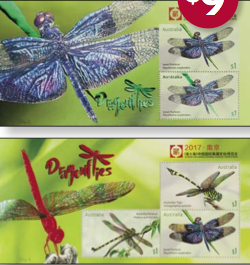 🇯🇪 Jersey Post will issue its "Jersey Flag" Post and Go labels from kiosk JE01 sited at Autumn Stampex 2017 in London from 13 to 16 September 2017 with an additional inscription "HRH Prince Philip/65 Years of Service". The kiosk will also dispense the "Fruits and berries" labels mentioned in Blogs 1039 and 1046. Rating:- 0.

🇬🇬 Guernsey Post Philatelic Bureau "tweeted" on 10 August 2017 that the Post and Go kiosk GG01 situated at Smith Street post office "had been busy" dispensing its "Lighthouses" stamps with additional inscriptions "welcoming cruise ship visitors from the Oriana and Ventura". Presumably that means another 2 strips adding up to 12 new stamps.