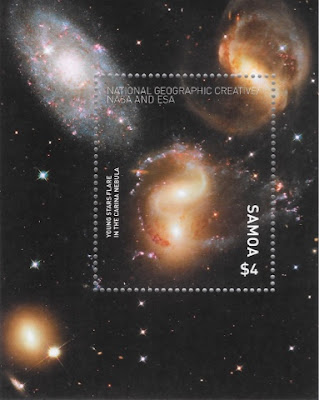 🇼🇸 In Blog 1052 I stated that "Philatelic Collector Inc. .... now a whole host of such items has been put on to the market minus anything from Samoa ...".
It appears that this statement was incorrect since PCI has now smuggled a couple of new issues with the name of Samoa printed on them on to the list of new issues of 2016.
The agency alleges that the following were put on sale, somewhere, on the following dates:-
23 December 2016 - Birth Centenary of former US President Kennedy - 1 miniature sheet containing 4 different stamps and
30 December 2016 - Space nebulae - 4 stamps and 1 miniature sheet containing a single stamp. 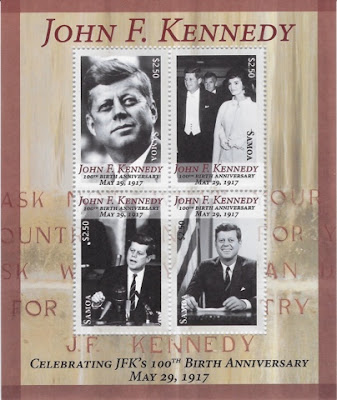 PCI's website for "Samoa Philatelic Bureau" now has a "Philatelic Bureau Update" which says, "Due to extenuating circumstances surrounding Samoa Post's failure to act within the agreed terms we have been given no other choice than to end our representation until an amicable resolution can be reached. Going forward we do not have plans to offer new issue services for 2017 issues onward, though we will maintain an inventory of all prior issues offered from our company.
We apologize for any inconvenience caused by this change, we will keep you informed going forward with updates should our representation resume ...."
I am not aware of any public response to this from Samoa Post nor of any new stamp releases from Samoa Post since the highly controversial and ludicrously expensive "Parcel Post" surcharges (face value totalling £257.49p) which were issued on 31 March 2017.