Collectors of bird and reptile-themed stamps will be interested in several of the stamps included in the New Zealand Post Tourism booklets which I mentioned in Blog 536. Three of the booklets contain stamps which depict birds and reptiles appear in two booklets. The Lower South island booklet contains a stamp which depicts a penguin on the Otago peninsula (unnamed species but presumably the Yellow eyed penguin), the Wellington booklet contains a stamp depicting a white kiwi and a tuatara lizard and the New Zealand icons booklet depicts a Kaka parrot, a kiwi and a bird called a Tui:- 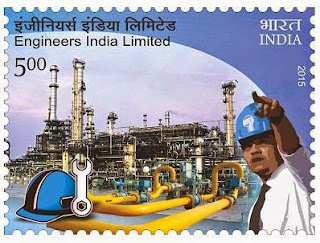 India Post issued a single stamp on 27 March 2015 on the subject of Engineers India Ltd. The stamp was launched at a meeting in New Delhi by the Indian Ministry of Petroleum and Natural Gas (depicted above).

The British National Postal Museum will issue souvenir "Post And Go" labels on 6 May 2015 as commemoration of the 175th anniversary of the Penny Black. The motif printed on the label, strangely, does not depict the Penny Black but a Maltese cross postmark so presumably the item also commemorates the postmark's anniversary which does not seem unreasonable. However the added inscription leaves no doubt about the real item being commemorated reading, as it does, "The B.P.M.A./Penny Black 175". Spare a thought for the poor old Twopenny Blue which is forever treated as the Penny Black's poor cousin and, though being more valuable, rarely gets a mention.

Fiji Post has issued 1 miniature sheet containing 2 stamps on the subject of Blue Coral. I do not yet know the precise date of issue:- 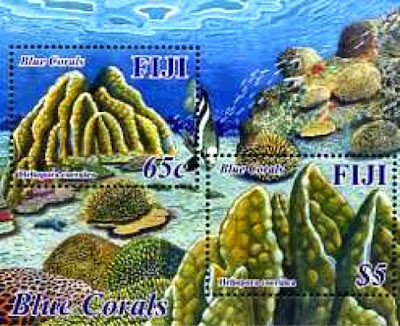 Pakistan Post issued a single stamp on 24 March 2015 to commemorate the Executive Council meeting of the Asian Pacific Postal Union held in Islamabad from 24 to 28 March. The design depicts a nice collection of Asian and Pacific flags for vexillologists to enjoy along with a surfeit of doves carrying letters in their beaks - where would stamp designers be if men had never invented flags or Noah's dove hadn't carried a form of message in its beak:- 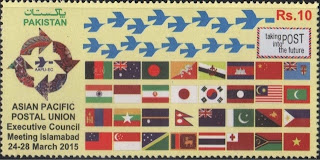 Judging by an item being offered for sale on an Internet auction site, Trinidad And Tobago was one of the beneficiaries of a gift from The People's Republic Of China during 2014 when the 40th anniversary of diplomatic relations between the 2 countries was celebrated by the issue of 2 miniature sheets - 1 containing 2 stamps depicting birds of importance to each country and the other containing 2 stamps which depict flowers of relevance to each one. The 2 miniature sheets which are offered for sale appear to be contained in a special presentation pack and appear to have a date of issue of 20 June 2014.
These ongoing issues whereby China donates an issue to another territory to commemorate, usually,  an anniversary of the establishment of diplomatic relations are always very interesting and a mini-collection of all that have been issued over the years would make up an interesting album and have some historical significance. I am surprised that some postal administrations in the west have not caught up with this idea - it would be good international publicity for the postal administration which did so and would play a worthwhile if minor role in the day-to-day relationship between the participating countries. Perhaps Royal Mail could kick off with such a project on the subject of relations between The United Kingdom and Sierra Leone given the way that Britain has played a significant role in helping the country deal with its Ebola crisis as well as the role Britain played in helping the country to return to democracy in 2000. 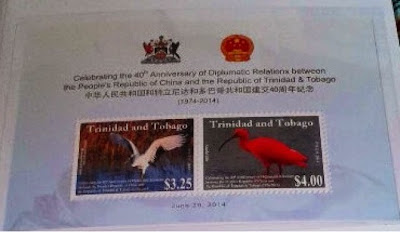 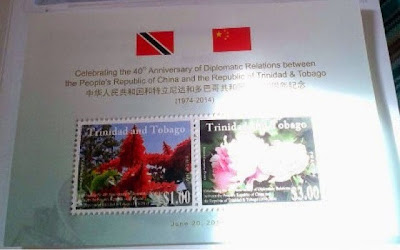 IGPC has issued 2 sheetlets, each of different stamps, and 2 miniature sheets on the subject of works by First World artists (see Blog 499D). One of the sheetlets depicts John Singer Sargant's  "Gassed" (1919, located in the Imperial War Museum) which shows a line of wounded and blinded British soldiers being led across a terrible, ravaged landscape past men lying in exhaustion on the ground on either side around them. The country whose name appears on this issue is Tuvalu (I will add illustrations of the issue when they come along and give the "date of issue" when I know it):-