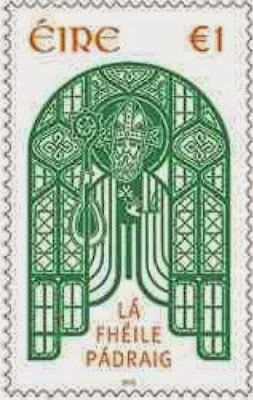 An Post, the postal service of Ireland, issued a single stamp on 26 Febuary 2015 to commemorate St. Patrick's Day (17 March). The stamp was designed by Steve Simpson and lithographed by Cartor. An Post describes Simpson's design as being in the style of the country's first definitive series which was issued by The Irish Free State in 1922. St. Patrick's Day is a national holiday in Ireland and Northern Ireland as well as parts of The Commonwealth whose original European settlers were largely made up of Irishmen - Newfoundland And Labrador and Montserrat. I like the design of the new stamp very much - An Post continues to have an excellent programme of new issues with frequently interesting designs.

I have been waiting for 10 years to see a set of the 2005 Ghana Panafest issue offered for sale and that day has finally come along and I have managed to obtain a set of this issue from an internet auction site. In the past I have managed to obtain used examples of 6 of the7 values but I have never seen an illustration of the C4500 value (depicted above) let alone seeing it being offered for sale. This must be the rarest modern Ghana set of stamps - at least up to now anyway - perhaps it is about to start to appear on the market as we saw with the long rare 1998 Malawi Christmas set which only began to be offered for sale more than 10 years after its issue (see Blogs of 20 and 27 August 2012). Still it is pleasing to see the ugly gap in my Ghana collection filled finally and to obtain this set after a very long search for it (see Blog of 21 July 2010).

Understandably, the lunar new year is a big philatelic event in Hong Kong - in Blog 528 I illustrated the basic set of 4 stamps and 2 "Heartwarming" stamps which were issued by Hong Kong Post on 24 January 2015. Below I now illustrate the remaining items of the issue, designed by Kan Tai-Keung, which are a miniature sheet, silk miniature sheet, a "gold and silver" miniature sheet commemorating the end of the Year of The Horse and the beginning of the Year of The Ram and 4 "gold" stamps depicting the Years of The Dragon, Snake, Horse and Ram. It is a colourful and beautifully produced collection of items which are a pleasure to add to my collection:- 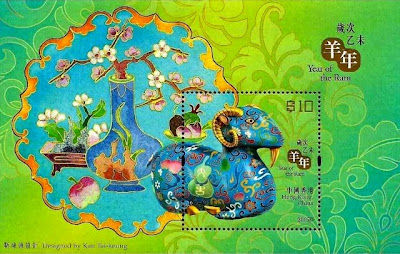 Hong Kong's next stamp issue was the "Heartwarming" set of six stamps which was issued on 12 February 2015. These are sold as a se-tenant block of 6 different designs and with Personalisable labels attached to each design:- 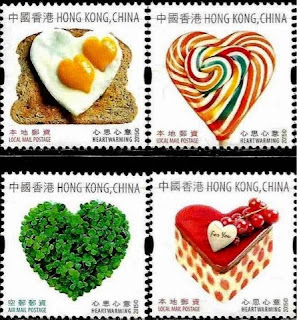