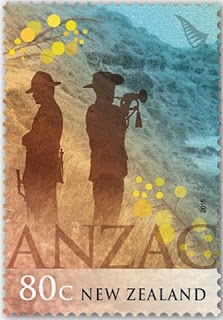 On 7 April 2015 New Zealand Post will issue 2 stamps and 1 miniature sheet as its contribution to a joint issue with Australia Post on the subject of ANZAC. The issue was designed by Australia Post and lithographed by McKellar Renown (depicted above and below). It's a very clever design with 2 ghost-like World War I military figures, one playing a bugle, standing on the shore of Anzac Cove paying their respects to the fallen. 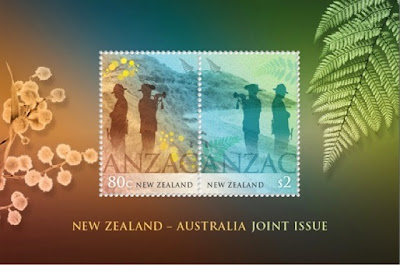 New Zealand Post is also now offering for sale its annual pack of Personalised stamps for 2014 - this time there are more than ever with there being 25 gummed stamps, 43 self-adhesive stamps (making a total 68 more stamps to add to New Zealand Post's total for 2014) along with 3 booklets:- 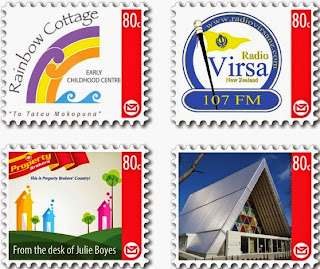 Intelligent AR has announced that 2 sets of "Post And Go" museum souvenirs will be issued to commemorate the 70th anniversary of the Allied victory in Europe. The A002 kiosk situated in the National Museum of the Royal Navy (The NMRN) in Portsmouth and the A005 kiosk in the Royal Marines Museum (The RMM) in Southsea will each dispense Post And Go labels from 8 to 29 May 2015 with the added inscription "VE Day 70".
At this stage it is not clear whether the added inscription will be applied to the Union Flag or Machin Head labels or both - if the latter is the case then that will mean 4 "Collector's Sets" each consisting of 6 labels - total face value will be £30.72p and remembering that there will also be 2 Collector's Sets released on 7 May to commemorate Royal Mail's attendance at the Essen Stamp Fair, a grand total face value of £46.08p for Royal Mail Post And Go issues for May 2015 may be arrived at. Phew! But .... I forgot - there are also the Post And Go labels which will be issued during the Europhilex Exhibition in London in May - will "Post And Go" soon be "Post And Gone" simply because collecting the labels will have bankrupted those who collect them?

The 6 new Royal Mail definitive stamps as mentioned in Blog 532 are depicted below. The set will be issued on 24 March 2015:- 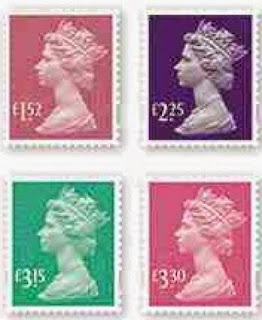 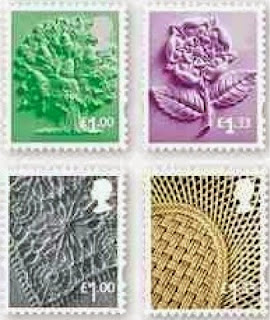 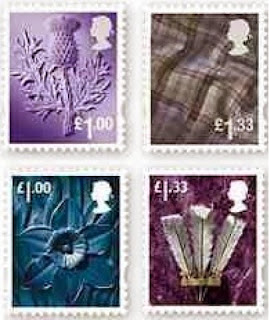