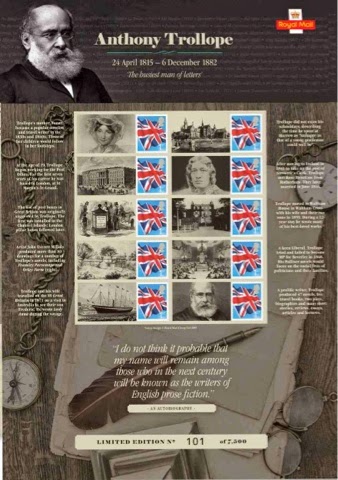 I gave up collecting Royal Mail's "Commemorative sheets" and "Generic sheets" quite a long time ago because of the large mark-up of their price compared with the face value of stamps contained in the sheets - this is especially true in the case of the "Commemorative sheets" which have been sold by Royal Mail for £14.95 compared with a stamp face value of just £6.20p (a 241% premium). Although there is evidence that there are only a few enthusiasts for these items, Royal Mail continues to churn them out at premium prices.
The next "commemorative sheet" will be issued on 24 April 2015 and will commemorate the birth bicentenary of the noted novelist and post office innovator, Anthony Trollope. Quite why he did not merit inclusion in the normal commemorative stamp programme remains a mystery especially when one or two fairly mediocre contemporary comedians did find their way to having their faces featured on Royal Mail stamps during 2015.
In this respect Trollope follows in the footsteps of the immensely historically important Scottish explorer, David Livingstone, who was overlooked for an appearance on a proper commemorative stamp on the occasion of his birth bicentenary in 2013 and had to make do with one of these overpriced commemorative sheets as an afterthought.
Then, on 13 May 2015, Royal Mail will issue a "Smilers" Generic sheet in connection with the Europhilex Stamp Exhibition to be held in London. Some of the attached labels depict sites in London of significance to the post office including the Post Office Railway in Whitechapel and the statue of Sir Rowland Hill who was born in Kidderminster in the English West Midlands and famously was responsible for the innovation of the postage stamp. Other featured subjects include the GPO Film Unit and Buckingham Palace post office. The price of the item will be £13.10p (50p more than the face value of the stamps).
As interesting as these 2 items may be, I have no intention of paying out £28.05p to buy 2 gummed sheets of paper on top of everything else that Royal Mail is pouring on to the philatelic market especially as the total face value of the stamps in these sheets will only be £18.90p. 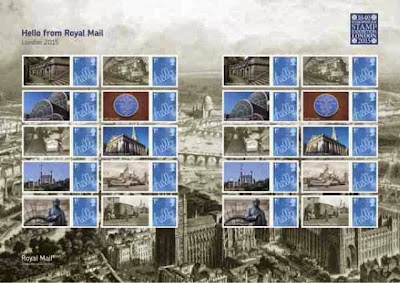 With the items mentioned above and in Blog 536, the running total of the cost of "one of everything" of postally valid items issued by Royal Mail during 2015 up to 13 May therefore rises again from the total recorded in Blog 535 to £204.64p.

It almost seems like a simple logical step to move from writing about Royal Mail to mentioning that Stamperija has released yet another batch of philatelic products which takes the form of 10 sheetlets each containing 4 different "stamps" and 10 accompanying miniature sheets. The "date of issue" is stated to have been 28 January 2015 and the umbrella subject of the set is "Post-Impressionist paintings". This time Maldives is the country whose name appears on these particular items. 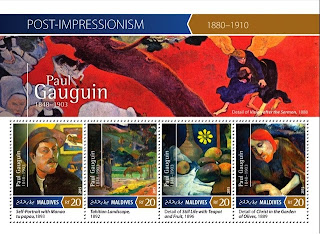 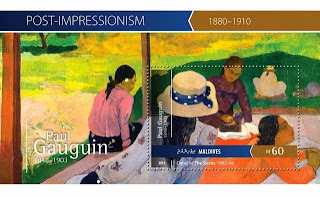 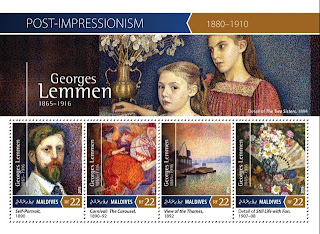 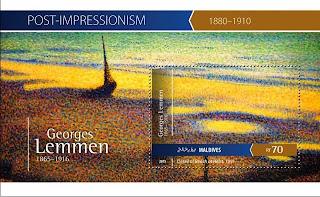 For anyone who feels that they really must spend their money on these items, the total face value of all 10 subsets and miniature sheets is Rf850 which is equal to £37.47p (US55.30c) at current exchange rates. Still, it's a little cheaper than buying the original works of art!

Gibraltar Stamps has added "Post And Go" stamps to its 2015 new issue programme and I presume that those items will be sold at the "Europhilex" Stamp Exhibition in London. Unless a kiosk is established for public use in Gibraltar itself it will be hard to see the labels dispensed from a kiosk situated temporarily a long distance away in the English capital as anything more than exhibition souvenirs and I shall not bother to spend my money on them.

Hong Kong Stamps will release a set of 4 stamps and 1 miniature sheet on 2 April 2015 to commemorate the 25th anniversary of the promulgation of the Basic Law. The stamps were designed by Bon Kwan from illustrations by Bianca Chiu and lithographed by Cartor:- 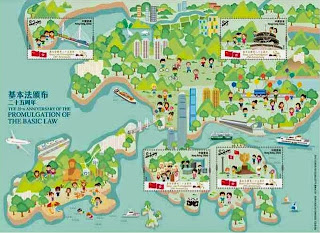 An Post, the postal administration of Ireland, issued 4 stamps and 1 x €12 "Prestige Booklet" on 20 March 2015 on the subject of Animation in Ireland. A couple of the featured subjects look rather sinister especially that which depicts a wild eyed man with stamps stuck on his tongue and that which has another wild-looking pair of eyes staring through a bush - titled The Secret of The Kells. The issue was designed by Vermillion Design and lithographed by Cartor. Even if I find some of the stamp designs to be rather unnerving I do like the look of the dog featured on the prestige booklet cover:- 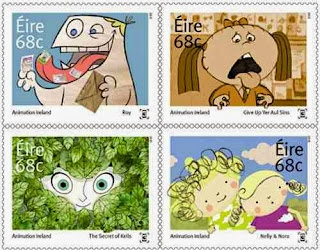 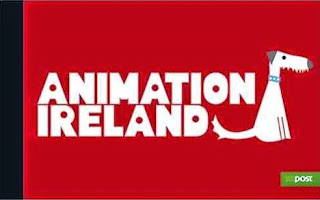