On 17 March 2015  Hong Kong Post will issue 6 stamps as well as a se-tenant strip of the same 6 stamps, 1 miniature sheet and a 2nd miniature sheet printed with 3D holographic foil with a micro embossing effect as well as a $60 "Prestige" booklet all on the subject of "Astronomical Phenomena". The issue will link to a total lunar eclipse on 4 April 2015 which should be seen clearly in Hong Kong if the weather is satisfactory. The set was deigned by Ken Li Shik Kwong and lithographed by Enschede:- 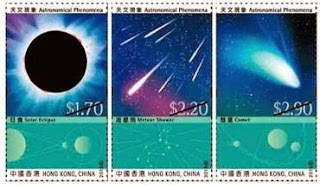 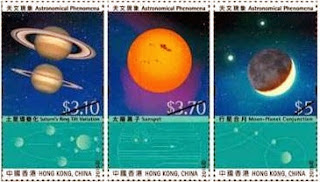 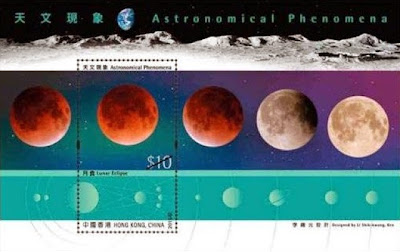 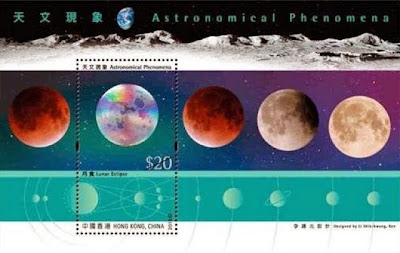 The Prestige Booklet contains 3 panes with the complete set of 6 stamps as well as a $10 miniature sheet:- 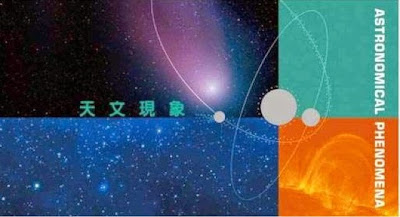 In addition to the 10 "Comedians" stamps to be released on 1 April 2015 by Royal Mail, an accompanying counter booklet of 6 self-adhesive stamps will also be issued. Presumably the 4 Machin Head definitives will be the same as those in the "Alice In Wonderland" booklet and have the code M15L MCIL and so only the 2 pictorial stamps in the booklet will be new stamps different from those in the set from counter sheets. The comedians featured on the booklet stamps are Morecambe and Wise and Sir Norman Wisdom (1915 - 2010).
The latter is very interesting since the comedian who appeared in a number of films in the 1950's and 1960's was famous for enjoying an immense popularity in Albania when it was ruled by the communist dictator, Enver Hoxha. Norman Wisdom's films were among the few western-made movies which Hoxha allowed to be shown in his fiefdom and the population of Albania took the little English comedian to their hearts and mobbed him enthusiastically when he visited the country. In 2001, he was made an honorary citizen of Tirana, the Albanian capital.
In his latter years, Norman Wisdom retired to Andreas in The Isle Of Man and became a Manx national treasure. A sitting statue of him was placed on a bench outside Douglas Town Hall but was eventually moved to a location outside the Sefton Hotel next to the Gaiety Theatre. The hotel bar is called "Sir Norman's Bar" and is popular with those going for a drink en route to an entertainment at the theatre. In this, the centenary of his birth, I presume that the Manx Post Office will also release a stamp issue commemorating its much loved former citizen but it is a pity that Royal Mail and Isle of Man could not have co-ordinated their issues - perhaps a Royal Mail-Isle Of Man-Albania-Iran joint issue could have been put together (yes, bizarrely, Sir Norman also enjoys an immense popularity in Iran of all places) - well, stranger things have happened!

I am not aware of any particular links between Sir Norman and Grenada but this did not prevent the island's philatelic agents from issuing a sheetlet of 6 identical stamps which depicted Sir Norman on 3 November 2002:- 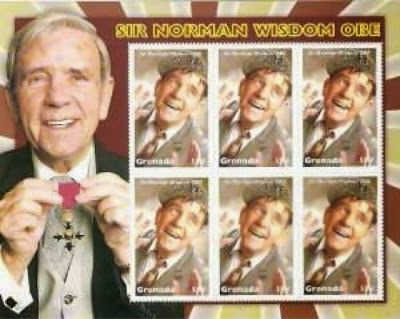 After writing Blog 524 I realised that I had omitted two previously issued Royal Mail stamps which depicted British comedians. Firstly, Peter Sellars was depicted on one of the set of 5 stamps issued on 8 October 1985 which commemorated British Film Year as well as the 150th anniversary of William Henry Fox Talbot's invention of the photographic negative:- 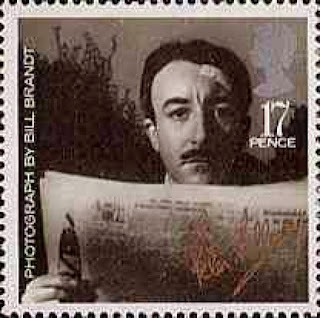 Secondly, Stan Laurel (or at least half of Stan Laurel's face) was depicted on 1 of the 10 Smilers greetings stamps issued on 6 February 1990. The value was firstly expressed as "20" but when the set was reissued on 26 March 1991 the face value was expressed as "1st" (initially sold for 22p) and printing was carried out in photogravure by Harrison. The stamp was reissued again on 22 May 2000 with the value again expressed as "1st" but it was now reprinted as part of a large sheetlet of the 10 original stamps with attached labels for personalisation or inscribed "The Stamp Show 2000" and, on this occasion, printed in photogravure by House of Questa:-

The total face value of the above will therefore be £23.32p for a one-of-everything mint set. Presumably the code on the 6 national stamps will be M15L MAIL. Norvic Philatelics Blog reports that the new definitive stamps are being produced to provide an alternative to the counter-produced Horizon stamps.

I calculate that between 1 January 2015 and 1 April 2015 a devoted collector of "Great Britain stamps" who feels determined to take one unused example of each new definitive and commemorative stamp/miniature sheet/"Post and Go" stamp or souvenir label/counter and prestige booklets/"Generic sheet"/"Commemorative sheet" will have needed to obtain 50 commemorative stamps printed in ordinary sheets, 1 miniature sheet, 16 definitives, 8 regional stamps,  6 "Post And Go" collectors sets (Working Sail from NCR machines, Working Sail from Stampex, Stampex Union Flag, New varieties from IAR static machines in Royal Marines Museum, Crewe and Bradford North), 1 Working Sail set in Philatelic Bureau pack, 2 counter booklets, 1 prestige booklet, 1 "Generic sheet" and 1 "Commemorative sheet", the total cost of which amounts to £141.88p. It's not unreasonable to expect therefore that collectors of "British stamps" should set aside approximately £560 to buy one of each postally valid item which will be issued by Royal Mail during 2015. But there's more:-

Intelligent AR's Post And Go Blog has reported that Intelligent AR is in discussions with view to installation of a "Post And Go" kiosk at the Fleet Air Arm Museum (FAAM) in Yeovilton, Somerset. No date for installation of the kiosk has yet been determined but this will be the 4th museum site for the sale of these museum philatelic souvenirs - see Blog 529 - the others being the National Postal Museum in London, the National Museum of The Royal Navy in Portsmouth and the Royal Marines Museum in Southsea.