Bangladesh has issued a single stamp to commemorate the ICC Cricket World Cup (depicted above). The date of issue was 5 March 2015:-

Post PNG, the postal administration of Papua New Guinea will issue a set of 4 stamps, 1 sheetlet containing 4 different stamps and 1 single stamp miniature during March 2015 on the subject of the 50th anniversary of the Christian Leaders Training College in Papua New Guinea. 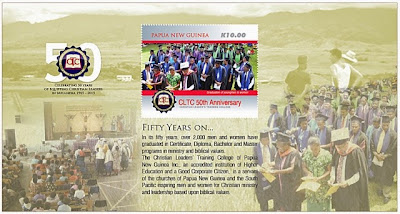 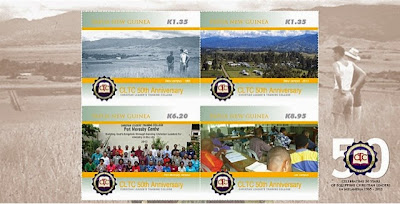 Post PNG is planning to release a total of 10 new stamp issues during 2015. A set of 4 stamps, 1 sheetlet containing 4 different stamps and 1 miniature sheet (a typical IGPC issue) was issued on 5 January 2015 to commemorate the lunar new year (see Blog 506). 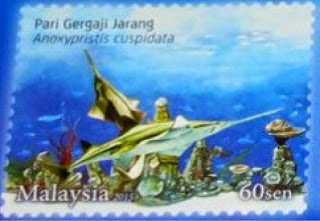 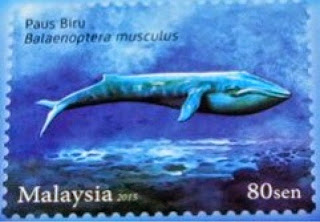 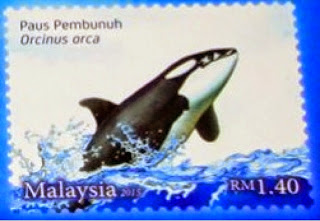 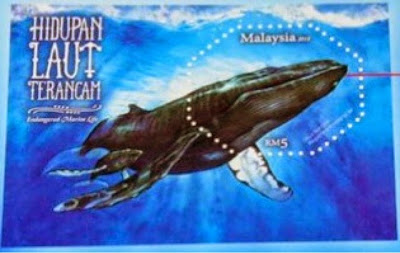 New Zealand Post has put on sale on its philatelic website a number of personalised booklets which are sold at various tourist sites. These seem similar to those which have been produced for a number of years by Universal Mail in New Zealand and which are, by now, very numerous indeed. The New Zealand Post versions are produced as booklets of 10 different stamps and the booklets are produced as several versions each containing different values - 10 each of 70c, 80c, $1.90c and $2, the same designs are repeated in each differently valued booklet. Thus the price of the booklets are $7, $8, $19 and $20 meaning that a set of all values for each site will cost the interested collector a total of  $54 (£26.89p). The sites featured in the booklets are Auckland Region, Canterbury Region, Eastern/Central North Island, Lower South Island Region, New Zealand Iconic Images, Taranaki Region, Top of South Region, WIkato Region, Wellington Region and West Coast Region.
Hence with 10 regions being featured, each with 4 booklets, a total of 40 booklets is on offer costing $540 (£268.89) which is probably rather off-putting to collectors I should think. However, I suppose buying 10 booklets of the 70c value at a price of $70 (£34.86) is not quite so alarming. I think that these are very interesting items and the 100 stamps that one obtains from buying the 10 x $7 booklets certainly give a good philatelic tour of New Zealand to the collector who buys them.
As a tourist in New Zealand I would be delighted to use these stamps on my mail back home and, as I have written in a previous Blog, I would be very pleased to see Royal Mail begin to issue such items in Britain so that when I visit various tourist sites I could use them on souvenir mail (though it would be pleasing perhaps not to be faced with the expense of fourty different stamps for each site as is the case with the New Zealand issues).

There is also an accompanying counter booklet with 6 x 1st Penny Black stamps as well as a "Generic sheet" containing 10 x Penny Black stamps and 10 x Twopenny Blue stamps. The design of this set is sheer genius - simple reproductions of the 2 classic stamps with the silhouette head of Queen Elizabeth II superimposed along with the "1st" value.
This is one of the very best issues to appear from Royal Mail in many years and should be enormously popular with stamp collectors and general public alike - at last we will all get a chance to use a Penny Black on our ordinary mail. Anyone receiving mail from me in the months following the issue of this wonderful set can be assured that they will have a Penny Black (or possibly a Twopenny Blue) attached to the envelope in which I post their mail.
The accompanying booklet publicises the Europhilex Stamp Exhibition about which I felt little interest since I hate going to London, an extraordinarily unpleasant and expensive city, but this Royal Mail issue and the previously mentioned Tristan Da Cunha "potato stamp"stamps (see Blog 531) has put a new spin on it all for me and made me feel I might venture down to London for a few hours to go to the exhibition after all.