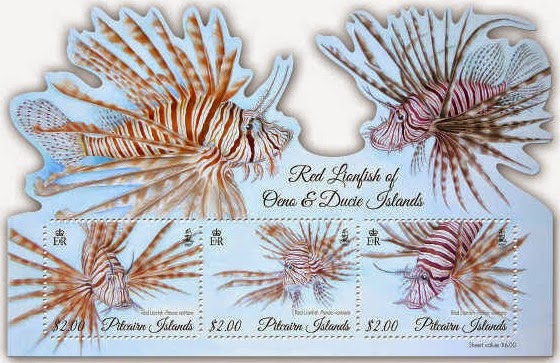 The Pitcairn Islands Philatelic Bureau issued an attractive and interesting miniature sheet on 26 February 2015 which is on the subject of the Red Lionfish of Oeno and Ducie Islands (depicted above). The item was designed by Sue Wickison and lithographed by Southern Colour Print.
Isle Of Man Stamps And Coins will issue a £3.50p miniature sheet containing 4 different stamps on 1 May 2015 which commemorate various anniversaries associated with Manx maritime history. The artwork on the stamps is by the Manx artist and seaman John Hassell and commemorates the centenary of the sinking of HMS Ramsey, the centenary of the sinking of the Lusitania, the 75th anniversary of the loss of Mona's Queen and the Master Frank RY 99 (the island's longest surviving half-decker still afloat - originally built in 1896 and relaunched in 1996 and often seen in traditional boat events to this day). The stamps were designed by Isle Of Man Advertising and printed in lithography:-

Guernsey Post participated in the Spring Stampex 2015 philatelic exhibition and produced Post And Go labels as philatelic souvenirs of the exhibition which were released on 18 February 2014. A strip of self-adhesive stamps was produced which consists of 6 different values and depicts the national flag of Guernsey. At least it was intended that 6 of the labels would be sold at the exhibition at a price of £3.73p but collectors were surprised to find that there were not 6 Guernsey flag stamps to buy but a total of twelve at a price of £7.46. This was because the labels were produced both with and without the inscription "Spring Stampex February 2015" as depicted below.
There is no Post And Go kiosk situated in the island of Guernsey itself from which the general public can purchase Post And Go stamps and so this is another example of these products being sold at a philatelic exhibition on foreign territory where they have no postal validity while not being offered for sale in the territory whose name appears on them. What a nonsense. Until a Post And Go kiosk is situated in Guernsey itself from which the Guernsey public can buy Post And Go stamps freely, I shall regard these items not as postage stamps but as exhibition souvenirs with theoretical postal validity. For the present I shall certainly not buy them for my collection and save £7.46p:-

The Guernsey "Post And Go" kiosk (GG01) at Spring Stampex also produced strips of 6 Royal Mail "Union Jack" stamps which were of course the only stamps produced by the machine which could be used on mail in the city in which the stamps were produced.
A representative from the Isle Of Man Post Office was present at Spring Stampex to witness the use of the Post And Go kiosks and it appears that collectors will soon be faced with Post And Go stamps from The Isle Of Man (or mere exhibition souvenirs if the Isle Of Man Post Office can not find space in one of its surviving post offices for a static Post And Go kiosk).
I do hope that the situation does not arise whereby the kiosks actually available for use by the Manx mail-sending public are the "Pay And Post" machines described in Blogs 498 and 517 while a Manx "Post And Go" kiosk pops up at various philatelic exhibitions in foreign territories as a means of extracting money from stamp collectors. It is hard to think that the interest of most collectors can be maintained in these pseudo-postage stamps with this unrelenting proliferation of issues which can usually only be obtained from ephemeral single-site philatelic exhibitions held in territories where the majority of Post And Go labels are not valid for postage.

My own preference for collecting Royal Mail "Post And Go" stamps is to buy a "Collector's set" from a NCR kiosk in a normal working post office. This means that the items I add to my collection are stamps which are available to the general public for genuine postal use on their normal mail and can therefore be described as true postage stamps. This is different from the items produced at philatelic exhibitions and museums where the kiosks are accessible to an extremely limited number of people and usually only for a very limited time period. They are of course very good if one wants a souvenir of one's visit to the exhibition or museum.
I rather like the idea of locally available postal souvenirs and if I ever do visit any of these exhibitions or museums it is quite likely that I would buy one of these labels and use it on a postcard as a souvenir of my visit. I would not, however, add these items to my collection of British (or Jersey or Guernsey) postage stamps as they are not relevant to a collection which tries to show what items were sold to the mail-sending public at post offices as receipts for the pre-payment of postage which should be freely available to the general public in reasonable numbers and at a reasonable face value. If something is sold at a single site with a very limited sales period then it can hardly be said to be freely available.
Only yesterday I added the latest items to my "Post And Go" collection -  I discovered that the post office in Pinfold Street in the centre of Birmingham was selling the 2nd Class "Machin Head" Post And Go" stamps from its NCR kiosks with a "MA14" code - this is the first time that I had seen the 2nd class stamps with that code. Other people were buying stamps from these kiosks so I could be assured that instead of buying philatelic souvenirs of limited availability I was buying genuine postage stamps to be placed in my collection. 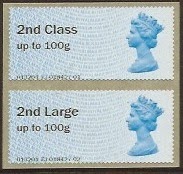 The "Intelligent A R" kiosks which are used at philatelic exhibitions are also being rolled out as "static" kiosks at various sites and actually provide local stamps which could be used as postal souvenirs of visits to various places in Britain although some of the places where they have been sited so far are not necessarily spots which would attract tourists to any great extent. These items can be viewed as "local stamps" because they include a location identifier as part of the inscription printed on the stamp. 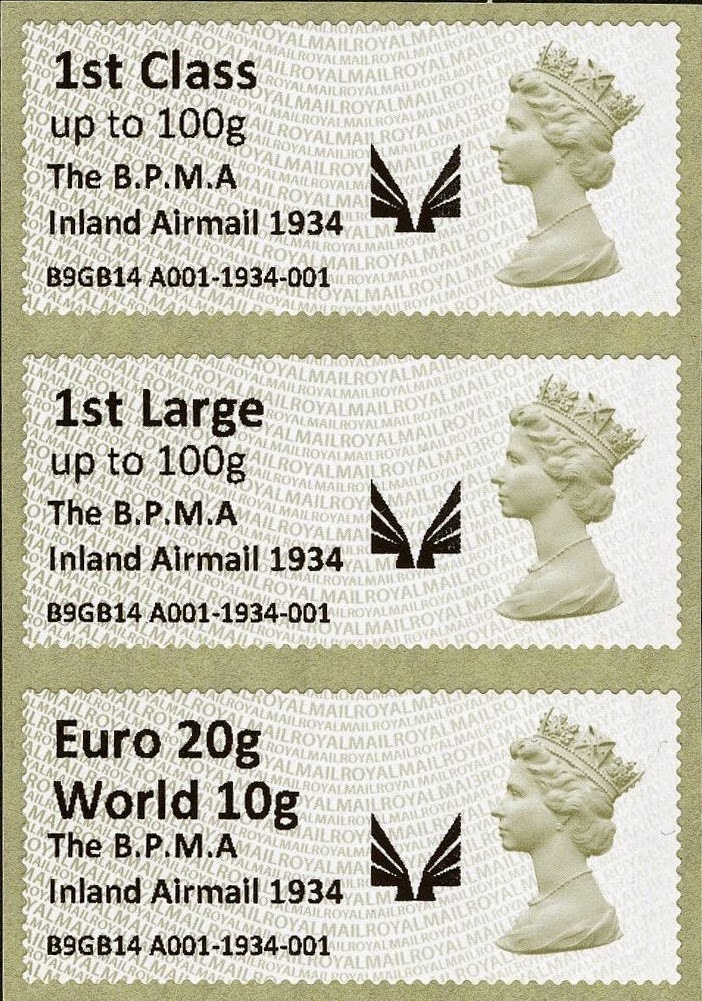 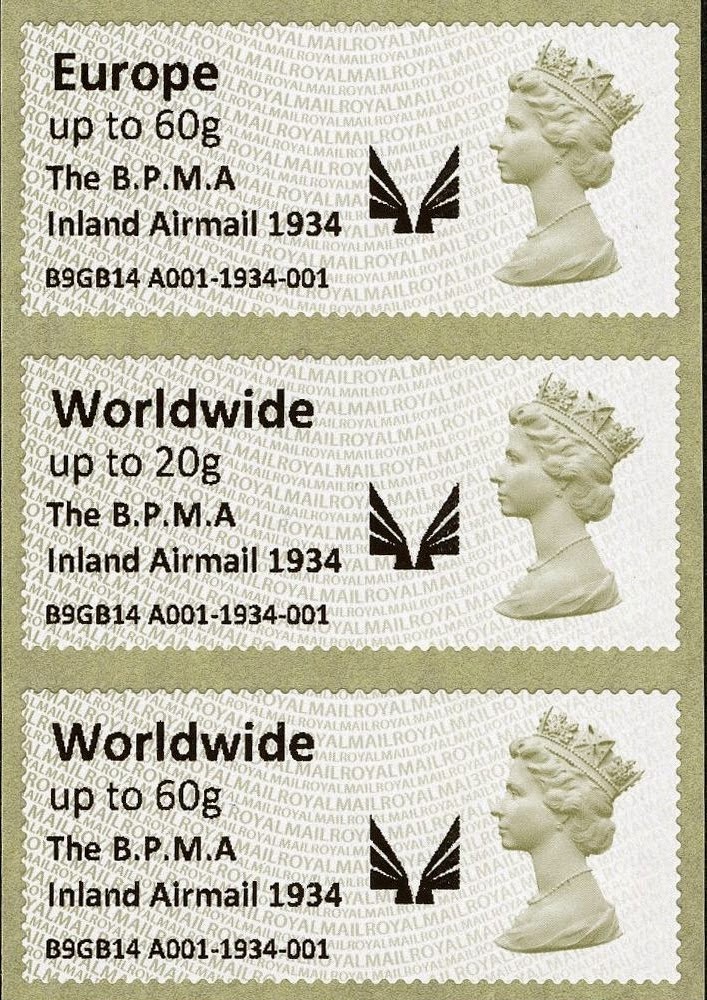 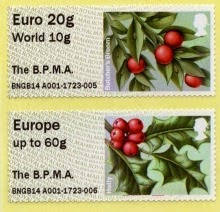 From 29.12.2014 the following types of "B.P.M.A."stamps were available without additional inscription - Machin Head 1st, Machin Head 2nd (both until 18.2.2015) and Union Flag
Birth bicentenary of Anthony Trollope, novelist and pioneer of the letter box, with inscription "The B.P.M.A. Trollope 200" and illustration of the Channel Islands postbox PFC.1853 used from 18.2.2015 to 30.4.2015 on Machin Head 1st class and 2nd class stamps (but not Union Flag design) 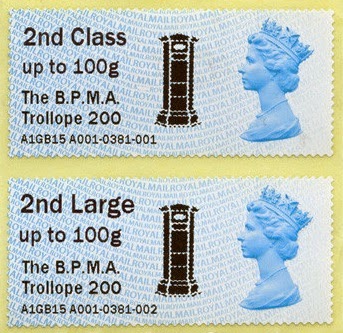 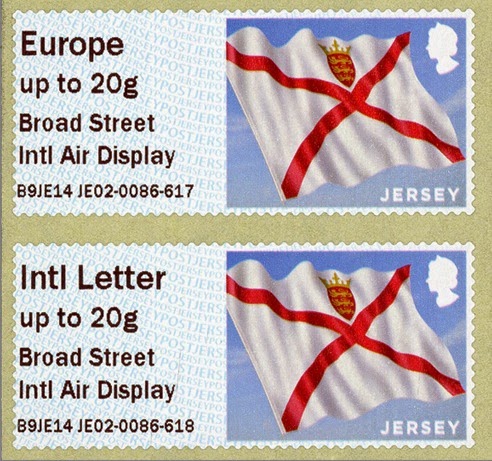 The above list has been compiled from various sources including the ever useful Norvic Philatelics Blog and the Intelligent AR Blog.
Personally, while I am not a great enthusiast of buying items which are mere exhibition souvenirs, I would be rather keen to see the IAR static kiosks rolled out in various postal sites across Britain particularly in post offices where visitors to the town involved could buy "local" stamps - that is - local postal souvenirs for use on their mail particularly for visitors and tourists who may wish to send postcards to friends and family back home or for locals sending letters to other parts of Britain or abroad. Such local stamps would be particularly useful in places of special tourist interest such as Stratford-upon-Avon, Blackpool, Oxford, Cambridge, York, Edinburgh, Cardiff, Trafalgar Square, Windsor, Salisbury and so on and would be even more interesting if they did not only have the name of the kiosk site inscribed on them but also had an added visual element such as was used on the NPM Inland Airmail and Trollope 200 issues as mentioned above. It will be interesting to see where the next static IAR kiosks appear and if they continue the trend of providing  identifiable local stamps.
Of course Universal Mail United Kingdom already produces a wide range of local stamps (see Blog 426, 395 and the Blogs of 29 September 2012 and 19 June 2012) but these are only for use on postcards being sent out of the country and some of the stamps sold at some sites are rather overpriced. One advantage of them however is that they not only have a local relevance but are frequently very attractive being illustrated with photographs of a local nature.

To return to Jersey, I was surprised to find a seller on an Internet auction site offering self-service machine-printed stamps from Jersey for sale similar to those sold from 2010 in Manx post offices, the so-called "Pay And Post" stamps, which I recently described in Blogs 498 and 517.  I had been completely unaware that such items had also been sold in Jersey and it appears that they made their first appearance on the island in November 2009 when Fujitsu postal kiosks were installed in the Broad Street and Central Market post offices. Prior to the installation of the Fujitsu kiosks, Jersey Post used bank owned terminals for the public to pay their postage using debit and credit cards after weighing their parcels and packets.
The kiosks are similar to those in use in the Isle Of Man because they can also be used as a means of paying electricity and water bills. Three kiosks were introduced to start with (2 in Broad Street?) and a fourth was introduced at the Jersey Electricity Company's Power House Store in St. Helier because of its usefulness in enabling the settling of electricity bills. Subsequently 2 more of the Fujitsu kiosks were sited at the Broad Street Post Office.
Thus long before the IAR "Post And Go" machines came along, "Pay And Post" kiosks were well established in Jersey and apparently continue to be in use since the seller of the stamps featured in the Internet auction set is offering items from 2009 to 2015 and a representative collection of the stamps covering that period is offered for sale. The first stamp is dated 26 March 2009 which obviously pre-dates the introduction of the Fujitsu kiosks and so presumably was produced by the bank-owned machine.
The second stamp is dated 24/8/2010 and I presume it to be the earliest format of stamp produced by the Fujitsu kiosk. The 2 later stamps are dated 20/2/2014 and 24/1/2015 and are printed on paper which has th Jersey Post logo printed

Just as I wrote about the Manx "Pay And Post" stamps, these machine-vended items seem to me to fulfill the definition of a postage stamp and I think they are a much more important part of the postal and philatelic history of Jersey than some rather expensive exhibition souvenirs printed in a distant and foreign exhibition centre.


The South Africa Post Office issued a miniature sheet of 5 different stamps on 5 February 2015 to commemorate the centenary of the South African Aviation Corps. The next issue will be released on 3 March 2015 on the subject of the anti-poaching of wildlife campaign. 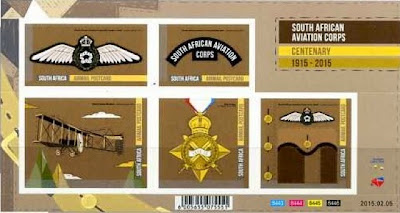 The USA-based philatelic agency, IGPC, has released 2 sets of philatelic products inscribed "Ghana" in 2015 so far. One set is made up of 2 sheetlets each of 4 different "stamps" and 2 miniature sheets and is on the subject of "Snakes":- 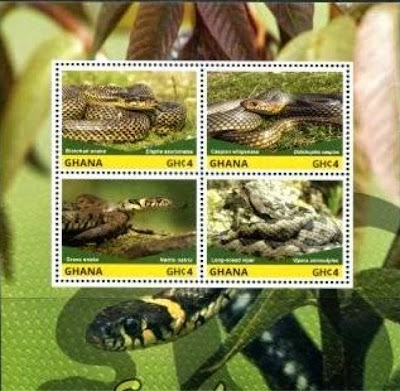 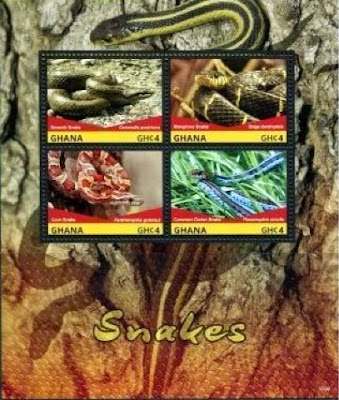 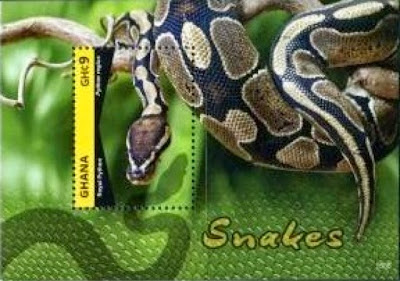 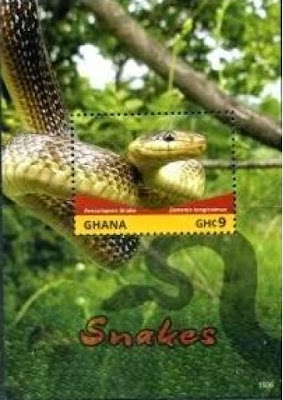 The second set released in the name of Ghana is on the subject of "Horses" and again consists of 2 sheetlets each of 4 different "stamps" and 2 miniature sheets:- 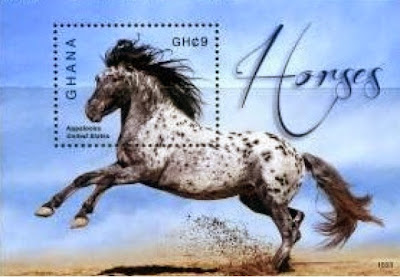 Stamperija has announced that it released a number of philatelic products on 13 January 2015 in the name of Maldives Post. Most subjects depicted on these items have little or no relevance to Maldives with one of the most bizarre sub-sets depicting huskies dragging a sled over a snowy scene which could hardly be more irrelevant to the equatorial Maldive Islands. The overarching theme of these products is "Transport History" and the complete production involves the release of 10 sheetlets (each containing 4 different "stamps") and 10 miniature sheets. The subjects of the sub-sets are Sled dogs, Special transport, Horsedrawn transport, Trains, Motorcycles, Pioneers of aviation, Spaceships, "Maritime timeline", Electric transport and Submarines. Someone must be buying this stuff because Stamperija keeps churning it out. 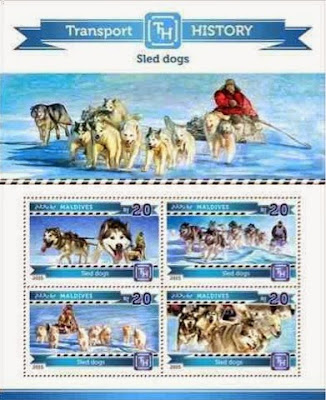 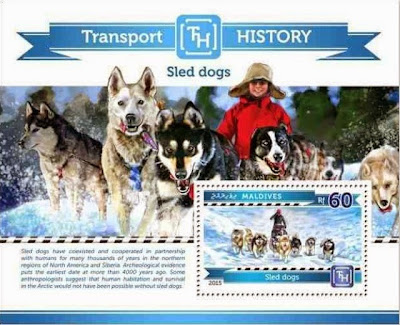 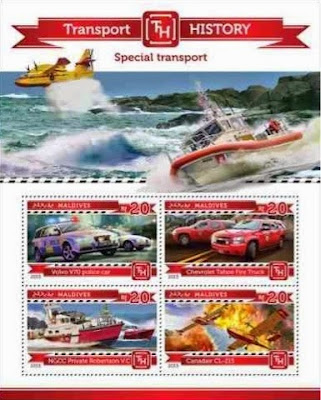 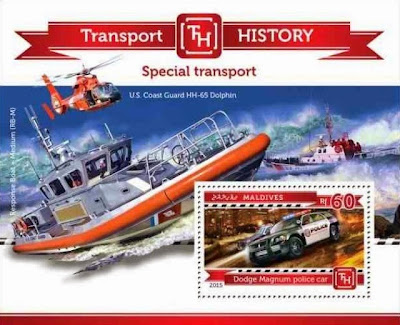 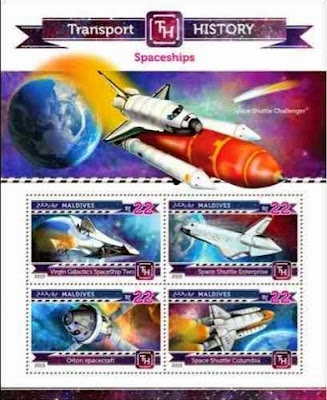 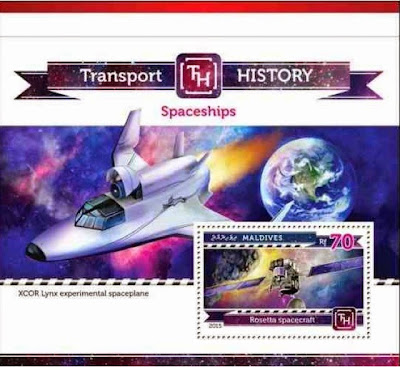