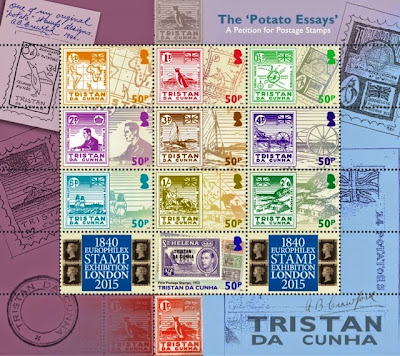 Tristan Da Cunha will issue an excellent sheetlet of 10 different stamps on 8 April 2015 to commemorate the Europhilex Stamp Exhibition London 2015 and the designs depict the stamp essays priced in "potatoes" (potatoes were used as currency during World War II with a rate of 4 potatoes to 1 penny) which were used as part of a petition in 1949 to the British Postmaster General for Tristan Da Cunha to be allowed to issue postage stamps. The issue was designed by Bee Design and lithographed by Cartor.
Not surprisingly this extraordinarily well produced and interesting issue has emerged from the Pobjoy Stamps/Creative Direction agency - it is just the sort of issue a postal administration should release if it decides it should issue a set of stamps to commemorate its participation in a foreign philatelic exhibition. If only more territories would switch to using Pobjoy Stamps as their philatelic agents - collectors would surely be assured of having the chance to add even more highly interesting, relevant and beautifully produced stamps to their collections:- 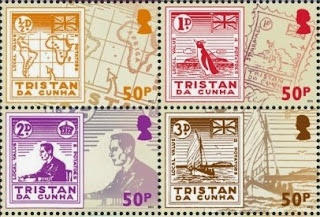 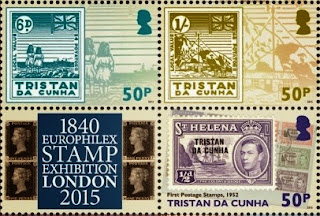 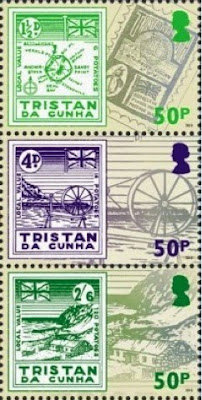 Royal Mail will be present at the Essen philatelic exhibition from 7 to 9 May 2015 and will setting up its "Post And Go" philatelic souvenir kiosk there. Another 12 souvenirs will be produced (1st class [63p], 1st large [95p], Europe 20g/World 10g [£1], Europe 100g [£1.52p], Worldwide 20g [£1.33p] and Worldwide 100g [£2.25p] each in 2 designs)  - the Machin Head and Union Flag stamps will be produced from machine A006 with the added inscription "Messe Essen 7-9 May 2015". The total face value of the 2 strips will be £15.36p. These items will only be sold for 3 days from a kiosk located in a foreign country where they have no postal validity and so I feel that they should be considered to be nothing more significant than exhibition souvenirs (expensive ones at that) and certainly there will be no place in my collection of postage stamps for them.
Guernsey Post will also be getting in on the act and will be transporting kiosk GG01 over to Essen in order to sell its Guernsey Flag souvenir labels along with the Royal Mail Union Flag labels although there has been no announcement that the Guernsey souvenir items will have an additional inscription similar to that which will be used on souvenirs dispensed from A006.

Stamp exhibitions seem to be the big thing at the moment - Malta Post will issue a single stamp with an attached label on 5 March 2015 to commemorate its participation at the Munich InternationalStamp Fair 2015 which was held from 5 to 7 March 2015:-

Gibraltar Stamps will issue a set of 4 stamps and 1 miniature sheet on 20 March 2015 to commemorate the 50th anniversary of the death of the British statesman and former prime minister, Sir Winston Churchill. The stamps were designed by Stephen Perera and lithographed by BPost Belgium:- 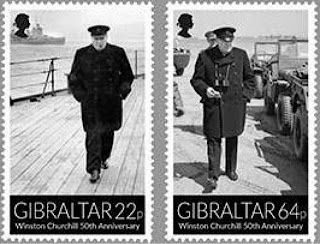 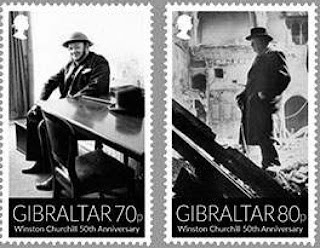 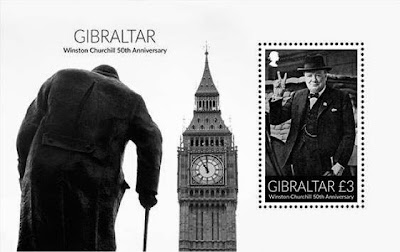