In Blog 498 I mentioned that to my great surprise I had discovered that the Isle Of Man Post Office had set up Pay And Post kiosks in several locations, including the soon-to-close, historic Regent Street Post Office in Douglas, which have several functions including the provision of postage stamps similar to the Post And Go (Faststamps) stamps now familiar in The United Kingdom and more recently in Jersey as well as soon to be produced as exhibition souvenirs by Guernsey Post.
The kiosks were first installed at the Regent Street Post Office as long ago as 2010 but I had never seen any news of this in the philatelic media nor any of the Pay and Post stamps offered for philatelic sale despite the increasing popularity of Post And Go stamps and the fact that they were in everyday sale as postage stamps for the mail-sending Manx public.
I have now received some examples of the Pay And Post stamps from a friend of mine who is a Manx resident and who is a regular customer of the Regent Street Post Office but had never been aware of the presence of the Pay and Post kiosks until I told him about them. I think this says more about the poor publicity put out by the Isle Of Man Post Office about the kiosks rather than my friend's powers of observation which are quite acute given that he is a prize-winning photographer. He has kindly sent me 2 of the kiosk-produced stamps in unused condition - one in the UK/Channel Islands rate of 42p and the other in the Airmail letter rate of £1.21p (depicted above and below) as well as the accompanying receipts produced by the kiosk.
I also depict a cover my friend has sent to me with a UK/Channel Islands rate stamp attached and cancelled by "Douglas Isle Of Man" slogan postmark which reads "COLLECT/ISLE OF MAN/STAMPS/wwwiompost.com" (rather ironically I think). The postmark is dated "6.45PM 26 JAN 2015" and the inscription on the stamp itself says "Postage /Isle of Man Post Office/RSBO Kiosk/4402-201-2-363536-3-1/29/01/2015  Valid: 90 days". The stamp is printed on paper which has the inscription "Isle of Man/Post Office/Oik Postagh Ellan Vannin" which is repeated vertically and is self-adhesive and delivered in vertical coils.
Most interesting is the fact that the stamps, as indicated by the inscription on them, only have a validity of 90 days from the day of production which differentiates them from Royal Mail and Jersey Post Faststamps which have unlimited validity (although the true Royal Mail Post And Go stamps are only valid on the day of issue).
Apart from the limited period of validity there seems to be little that is different between these Manx stamps and the "Post And Go" stamps sold by Royal Mail and Jersey Post. It is surprising, though very pleasing, that the Isle Of Man Post Office has not exploited stamp collectors with the sale of multiple pictorial versions of these kiosk-generated items in the way that we have seen Royal Mail and Jersey Post do so. These Pay And Post stamps fulfill a genuine postal need and seem to be an important new development in the story of the stamps of The Isle Of Man and even The British Isles and should be of particular interest to "Post And Go" stamp collectors. Perhaps we will see the impoverished Isle Of Man Post Office who are selling off the family silver - their historic post offices - recognise that these kiosk-produced stamps may provide an additional small philatelic income if special pictorial types are produced. For the moment, however, I am very pleased to add examples of the Pay And Post stamps to my collection because they meet genuine postal needs unlike many of the Post And Go stamps which are nothing more than exhibition and museum souvenirs with extremely limited availability:- 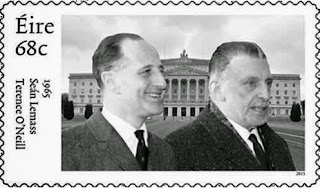 An Post, the Irish postal service, issued a single stamp on 22 January 2015 to commemorate the 50th anniversary of the meeting in January 1965 of Sean Lemass, Irish Taoiseach from 1959 to 1966, and Captain Terence O'Neill, Prime Minister of Northern Ireland from 1963 to 1969 and leader of the Ulster Unionists, which is viewed as the first significant meeting between important politicians from the north and south of Ireland and the first step in the thawing of relations between the two territories in Ireland. The two leaders met again February 1965 in Dublin.
This historic commemorative stamp was designed by Red And Grey Design and lithographed by Irish Security Stamp Printing Ltd.
It is interesting that An Post chose to commemorate the 50th anniversary of these historic meetings while Royal Mail did not commemorate another immensely historically significant anniversary of a meeting - the 750th anniversary of the first Parliament (see Blog 514).


The IGPC is issuing stamps on behalf of Antigua And Barbuda (date of issue awaited) in the form of a sheetlet of 4 different stamps and 1 miniature sheet which commemorate the Lunar New Year - "the Year of The Ram":- 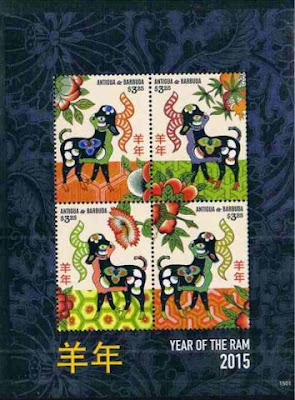 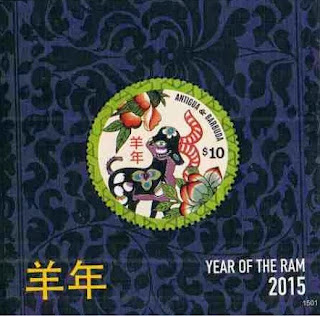 Pos Malaysia issued a set of 3 stamps on 27 January 2015 to commemorate Malaysia's taking on of the chairmanship of ASEAN:- 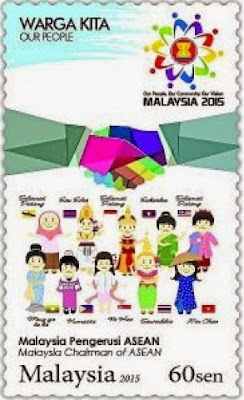 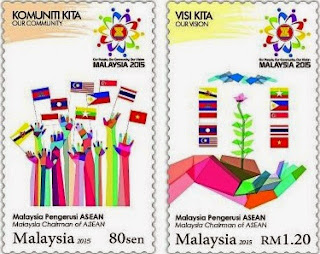 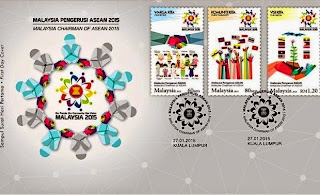