🇫🇰 The postal service of Falkland Islands will issue a pair of stamps on 6 December 2019 on the subject of local support charities - the Cancer Support and Awareness Trust and the Stephen Jaffray Memorial Fund which offers support to families of islanders who require medical treatment outside the islands and enables them to travel with their sick relative and stay with them while treatment is being given. A worthy issue. Rating:- ****. This is the sort of issue that small territories should be issuing - making their postage stamps relevant to their community.
The stamps were designed by Andrew Robinson and lithographed by Cartor and perforated 13.5 x 13. 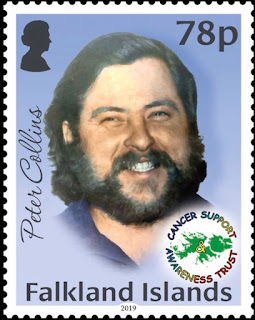 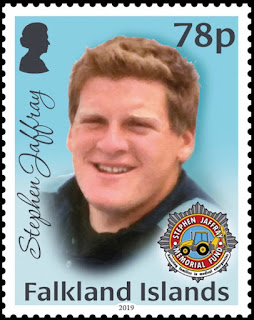 🇵🇰 The Pakistan postal service issued a single stamp on 4 November 2019 to commemorate the 30th anniversary of the Convention on the Rights of the Child’. Rating:- ***. 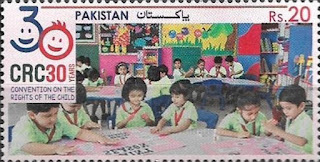 🇲🇲 The postal service of Myanmar issued a single stamp on 28 October 2019 as the 11th part of its Myanmar Calendar series. The design features the Kathina Robe Offering Ceremony and a Luffa Accutangula Roxb flower. The issue was designed by Wai Zin Paing and lithographed by Security Printing Works (Myanmar) and perforated 14. Rating:- *****.

🇨🇦 Canada Post issued a single self-adhesive stamp produced in booklets of 10 on 6 November 2019 to commemorate the 150th anniversary of the Red River Resistance in which the Métis people (a First Peoples-French mixed race who lived in Rupert’s Land which had been annexed by the Hudson Bay Company and which was incorporated in Canada when it was established as a Dominion in 1867) resisted the territory’s first Anglophone Governor, William McDougall when he sent out surveyors to plot the land according to the system used in English-speaking Ontario. Led by Louis Riel, the Métis prevented McDougall from entering the territory. The Governor declared that the Hudson’s Bay Company had lost control of the area and delayed the transfer of sovereignty but Riel established a provisional government and negotiated directly with the Canadian government and this led to the Manitoba Act and the incorporation of the area in Canada.
The new stamp was designed by Paprika and features a photograph of Riel’s provisional government against a background of a lithograph of Fort Garry by Henry James Warre.
This is a historically significant and interesting issue. Rating:- *****.
A single stamp depicting Riel was issued by the Canadian postal service in 1969. 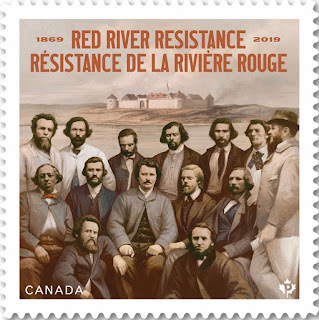 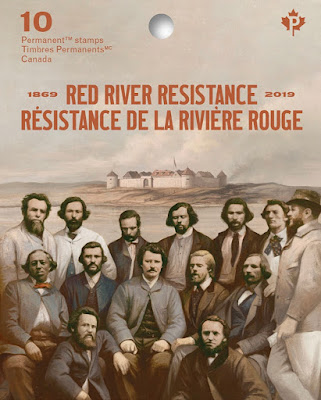 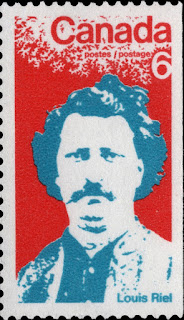