🇬🇧 The two miniature sheets to be issued by Royal Mail to commemorate the English team’s Cricket World Cup victory as well as that of the Women’s team in 2017 will be issued on 22 August 2019 (see Blogs 1471 and 1472).

🇰🇪 Kenya Post has issued a set of 4 stamps to mark the 10th anniversary of World Sickle Cell Day. I do not yet have details apart from illustrations of the stamps but suspect that the date of issue was 19 June 2019 which is the date of the event itself. Rating:- ****. 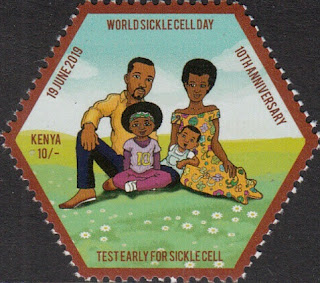 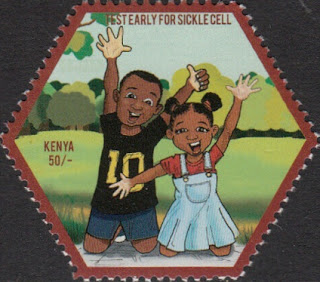 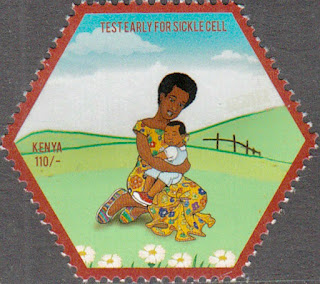 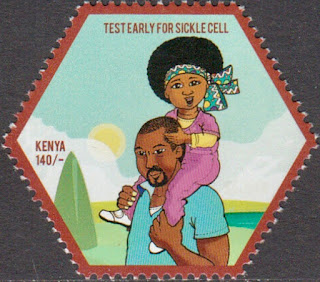 🇲🇿 Gene, the editor of the extraordinarily useful online stamp catalogue, Colnect, has been kind enough to supply me with information (which he does frequently and which I greatly appreciate) of the existence of 2 previously unreported apparently locally produced stamps from the Mozambique postal service. The issue commemorates the opening of the Maputo-Katembe Bridge, a joint project between Mozambique and The People’s Republic Of China. It is not clear if there are other stamps in the set but they are quite crudely printed having all the features of being printed locally in Maputo.
Gene believes that the stamps were issued by Correios De Moçambique at some time in 2018. I assume that it will be very difficult to obtain examples of this issue. Rating:- *****. 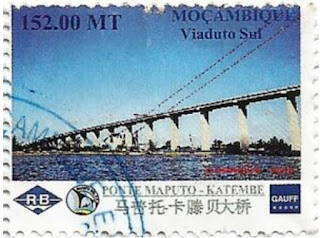 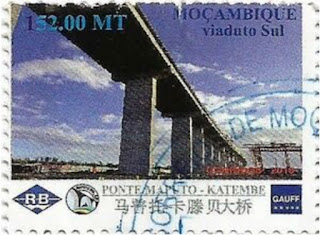 Meanwhile, the notorious producer of philatelic items, Stamperija, of which the Mozambique postal service is a client, also released 2 miniature sheets, one containing 4 different ‘stamps’ and the other a single ‘stamp’ on the subject of the opening of the bridge with a stated ‘date of issue’ of 10 February 2019. While the locally produced stamps highlighted here are highly desirable the Stamperija tat is not. 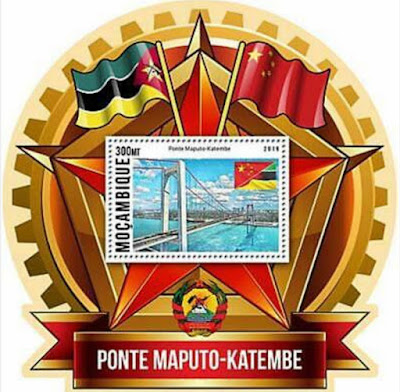 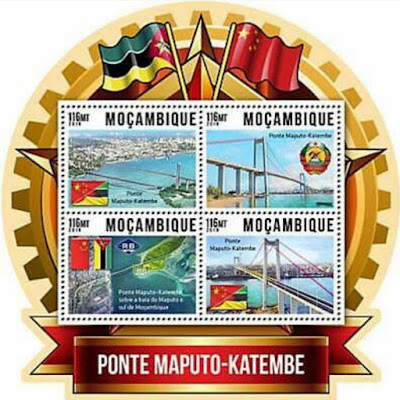 🇰🇮 Kiribati Post will release an issue on 27 September 2019 to commemorate the 150th anniversary of the birth of Mahatma Gandhi. I have no further information about the issue at present. Thanks to Etei Abeteneko of the Philatelic Division of Kiribati Post for the information.

🇳🇿 New Zealand Post will issue an entertainingly titled set of 9 stamps produced in sheetlet format on 7 August 2019 depicting what it describes as ‘Rock Legends’ and depicting not popular veteran musical performers but, er, rocks.
The issue was designed by Eighty One Group of Wellington and lithographed by Southern Colour Print and perforated 14.5 x 14.
Rating:- ****. 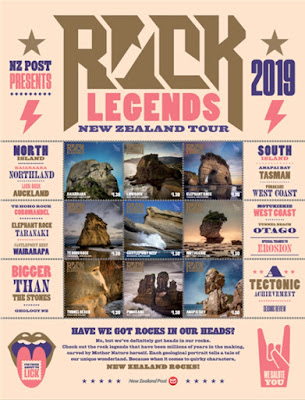