1444. 🇲🇹 Malta To Commemorate Centenary of Historic Protests On The Island.

🇲🇹 MaltaPost will issue an interesting miniature sheet containing a single stamp on 7 June 2019 to commemorate the Centenary of the ‘Events of 7 June 1919’. These events took the form of demonstrations by Maltese people who were protesting against the then economic situation in the island where insufficient food imports had resulted in upward spiralling food prices. The protesters attacked various buildings and the local police called on British forces on the island to help them deal with the riots. An insufficient number of 64 troops were deployed to deal with the thousands of demonstrators and events got out of hand to the extent that 4 Maltese civilians were killed. The events eventually led to the granting of home rule in Malta. The date of 7 June was made a national holiday in Malta from 1989 to commemorate those who died.
The issue was designed by Sean Cini and lithographed by Printex and perforated 14. Rating:- *****. 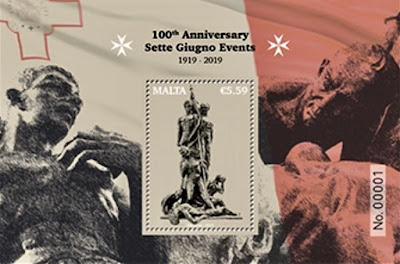 🇭🇰 Hong Kong Post will issue a miniature sheet containing a single stamp on 11 June 2019 to commemorate its participation in the China 2019 World Stamp Exhibition. The item was designed by Margaret Chu and lithographed by Cartor and perforated 13.5. A colourful item. Rating:- **. 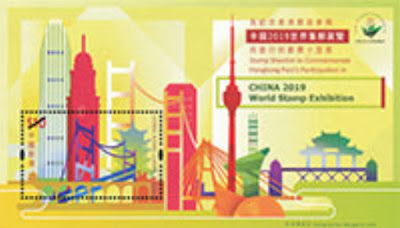 🇮🇳 India Post issued a My Stamp on 13 May 2019 which is titled ‘Festival of Democracy’ and which commemorates the country’s latest general election in which the current prime minister’s party,   the BJP, scored a massive victory. As usual the stamps were sold in sheetlets of 12 at a premium. The stamp depicts the office of the Chief Electoral Officer in Karnataka.