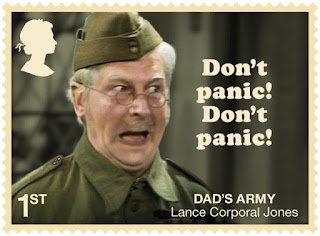 🇬🇧 Royal Mail has released the designs of a couple of its planned stamps for 2018 to whet collectors' appetites. The first stamp is from the 'Dad's Army' set of 8 which is planned for release on 26 June 2018 and depicts the iconic character 'Corporal Jones' and one of his catchphrases from the classic comedy television series which celebrates its 50th anniversary next year. This is bound to be an enormously popular set here in Britain among the general public and could play a role in the promotion of stamp collecting if given adequate publicity.
The second stamp depicts an osprey from the 'Reintroduced species' set made up of 6 stamps due for issue on 17 April 2018. Another stamp in the set will depict the Large Blue butterfly. This set again is a potential winner with the general public.
The issue to commemorate the Centenary of the Royal Air Force due for release on 20 March 2018 will be made up of 6 stamps which will depict British aircraft spanning the century and 4 stamps will additionally depict the RAF's Red Arrows aerobatic team which I presume will be combined in a miniature sheet.
2018 is looking promising.
See also Blog 1119. 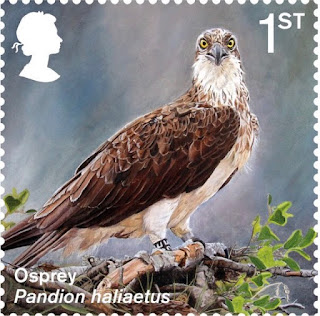 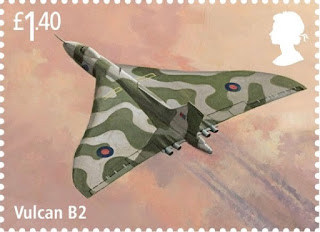 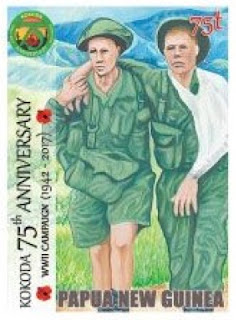 🇵🇬 Post PNG, the postal service of Papua New Guinea, issued 4 stamps and 2 miniature sheets on 18 November 2017 to commemorate the 75th anniversary of the Battle of Kokoda which took place in Papua New Guinea. This excellent set was designed by Kim Kaupa of Post PNG and lithographed by Southern Colour Print.
The local people joined Australian forces in the four month long battle against the invading Japanese with the crucial fighting taking place along a jungle path over the precipitous Owen Stanley Range and the infamous Kokoda Track. In memory of the conflict it seems that walking the Kokoda Trail has become a rite of passage for many young Australians.
A worthwhile issue. Rating:- *****. 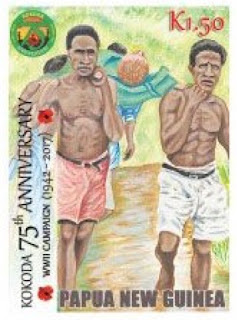 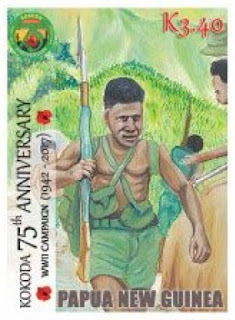 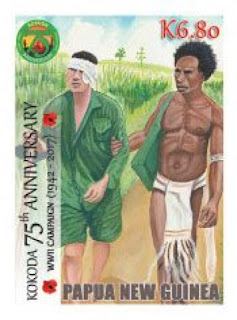 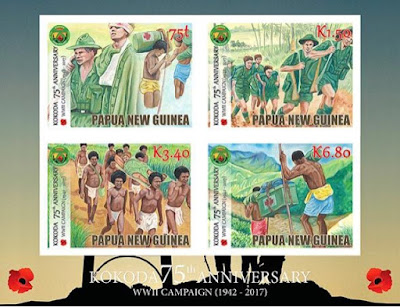 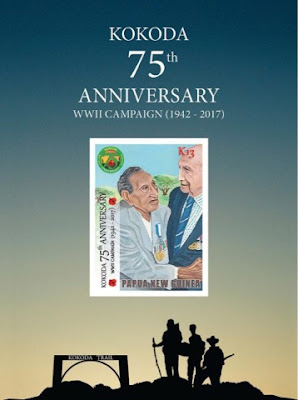 🇦🇬 IGPC, the Beijing- and New York-based Philatelic agency, which has previously branded itself as "the World's most respected Philatelic Agency", has issued or is about to issue a sheetlet of 4 different stamps on the subject of the Chinese new year which, as we all know by now, will be the Year of The Dog. The designs which include the inscription 'Antigua And Barbuda' feature English bulldogs and Rottweilers but as usual one must ask, what on earth has Chinese New Year got to do with Antigua And Barbuda? Rating:- 0. 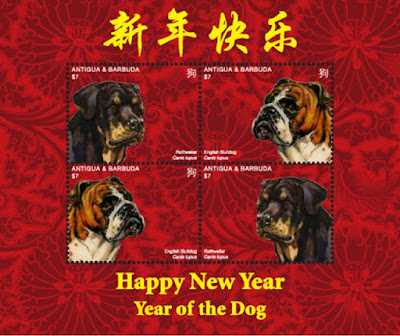