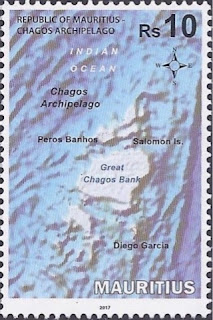 🇲🇺 The postal service of Mauritius issued a set of 3 stamps on 11 December 2017 which formed a philatelic claim to the British territory of British Indian Ocean Territory in the form of the Chagos Islands and to part of the French Southern and Antarctic Territories in the form of the island of Tromelin. 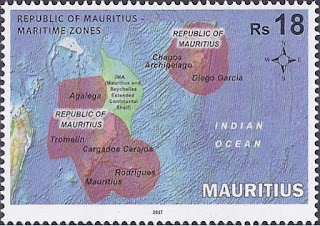 The Chagos Islands were claimed by the French after their settlement in Reunion in 1665. The British claimed the islands in 1786 and they were ceded to the British finally in 1814 after the defeat of Bonaparte at the end of the Napoleonic Wars. The British governed the islands from Mauritius and attached them to that British colony in 1903. In 1965 Britain purchased the Chagos Islands from its then colony of Mauritius for £3 million and incorporated them in the new colony of British Indian Ocean Territory along with islands which had previously been part of its then colony of Seychelles.
The islands which included Aldabra and Cosmoledo were returned to Seychelles when it was granted its independence in 1976 but the Chagos, including Diego Garcia which had been transformed into a large US military base, remained as the rump territory of BIOT.
Following resolutions passed by the United Nations which ruled against the dismemberment of dependent territories prior to their independence, Mauritius claimed sovereignty over the Chagos Islands. On 23 June 2017, the United Nations General Assembly voted to refer the dispute between Mauritius and the United Kingdom to the International Court of Justice to clarify the legal status of the Chagos Islands. Britain attempted to prevent the resolution being passed but was heavily defeated with 94 countries voting against Britain and only 14 supporting the country (Afghanistan, Albania, Australia, Bulgaria, Croatia, Hungary, Israel, Japan, Lithuania, Montenegro, New Zealand, Republic of Korea, Maldives and United States). Many members of The European Union failed to support Britain (is there any wonder that the majority of British voters opted for Brexit?) Most surprising is the abstention of France which itself possesses territory which is claimed by Mauritius - the island of Tromelin (featured on the Rs25 stamp) which is part of the French Southern and Antarctic Territory though an agreement was made between the 2 countries for co-management of the island.
So this is a very interesting issue which highlights how the issue of stamps is not made just as a source of revenue for the issuing postal administration but also its role as a means of making a political or diplomatic point. Rating:- *****. 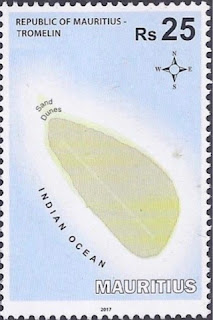