🇻🇨 A sheetlet of 5 stamps is being offered for sale currently presumably having been produced by the Beijing- and New York-based philatelic agency, IGPC, in the name of the postal service of St. Vincent And The Grenadines which features "Sites and Scenes" of the islands. As an item which actually depicts local places it is of interest compared with most items produced on St. Vincent's behalf but as usual production of items from this agency is less than satisfactory. This particular sheet is notable for the inscription at the upper right-hand side of the sheet which reads, 'The breathtaking islands of St. Vincent & The Grenadines are located in the southern Caribbean Ocean ..... '
So, if IGPC is to be believed, the world has a new ocean - The Caribbean Ocean. This rings of a slapdash production but we are quite used to that with the products which appear from this particular agency. Rating:- *. 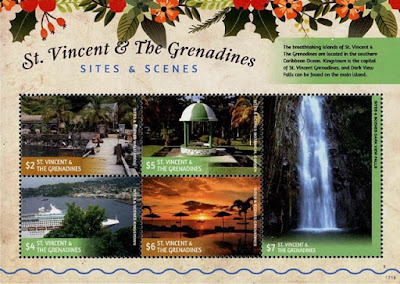 Also on sale is another product with the name of St. Vincent printed on it - a sheetlet of 6 different stamps with a total face value of EC$42 (£11.62p) on the subject of 'Caribbean Fruits'.
I do not yet know the alleged dates of issue of either of the above products. Rating:- 0. 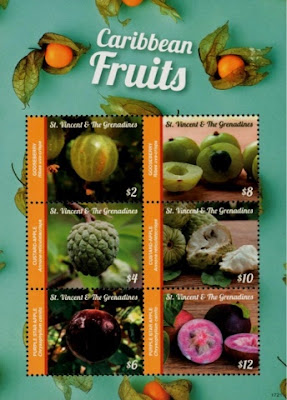 🇯🇪 Jersey Post will issue a set of 6 stamps and 1 miniature sheet on 26 January 2018 which attempts to cash in on the nostalgia of today's stamp collectors which in Britain at least are mainly drawn from the generation known as the 'The Baby Boomers'. This set reflects the trivial aspects of 1960s culture which the Baby Boomers will recall with nostalgia and includes one of the most excruciatingly inconsequential stamp designs of modern times- a 'hedgehog' with its spines made up from sticks with chunks of cheese and pineapple pierced through by them - high 1960s British culinary 'sophistication'!
This is probably a quite sociologically interesting set of designs but the issue is quite unnecessary and released without any obvious reason. Rating:- 0.

Below I reillustrate the single stamp which Jersey Post will release on 5 January 2018 to commemorate the Chinese new year - the Year of The Dog - and also now illustrate the additional miniature sheet. There is no real reason why a small Channel Island should issue stamps for Chinese new year and, like the '1960s' set, I shall not be adding them to my own collection. Rating:- 0. 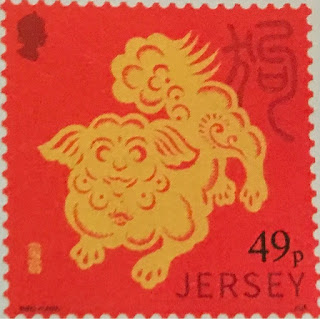 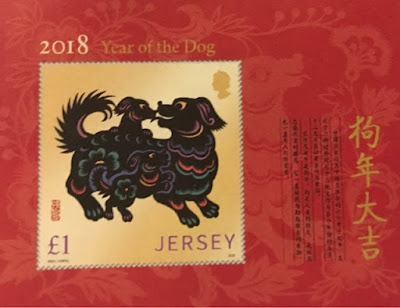 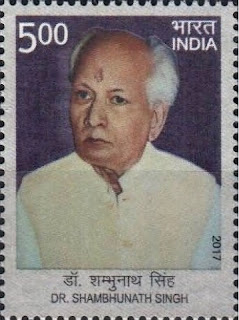 🇬🇧 Illustrated below are the Post and Go stamps dispensed in a strip of 6 values from kiosk A006 situated at the Royal Navy Museum HMS Trincomalee with the reused "Poppy" design of 2015 which was used in error with the new 'HMS Trincomalee/12th Oct 1817' additional inscription. The error is dated to the 12 October 2017. I'm not keen on the Post and Go errors but this is reasonably attractive. Rating:- **. 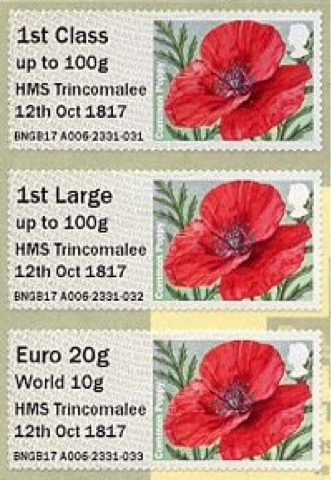 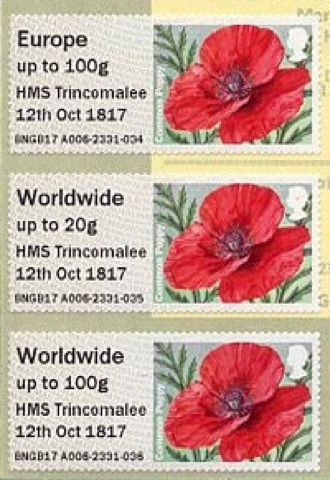 🇧🇹 Bhutan Post has issued a sheetlet of 6 different stamps and a single stamp miniature sheet on the subject of 'Pheasants of Bhutan'. This is another attractive, locally relevant and relatively inexpensive issue from Bhutan Post. Rating:- ****. 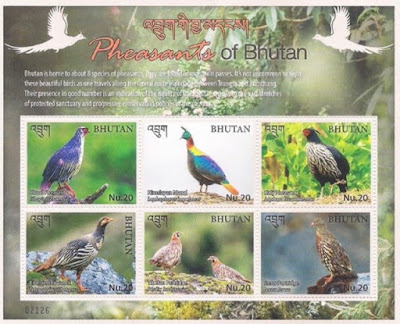 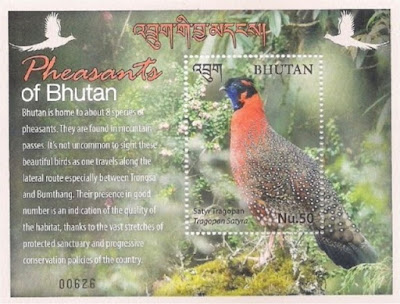