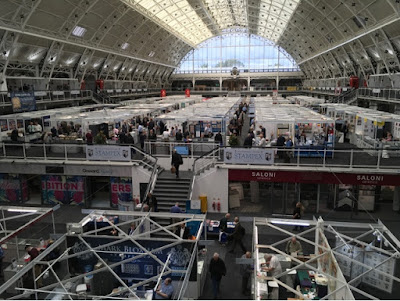 🇬🇧 Today I visited Autumn Stampex 2017 in London. It looked rather like a venue for an all male Saga day trip. There were a reasonable number of visitors to the exhibition but there was not any reason to feel claustrophobic. As I have written, most of the customers were men - looking around me and doing a rough head count I reached the conclusion that male customers outnumbered female customers in a ratio of about 20-25 men to one female. I suppose it's true to say that for stamp collecting, t'was ever so.
There was the occasional young person at the exhibition on the customer side of the counters but generally the people shuffling around the hall were greying men in various stages of balding making valiant attempts to disguise the hairless patches on their heads with comb overs of varying degrees of success.
Apart from the latest deluge of philatelic items on sale at the Royal Mail stand and the Post and Go kiosks, only the Isle Of Man Stamps and Coins stand, shared with the Masonic Stamp Club, was selling new issues. There was no representation at all from Jersey Post or Guernsey Post or the Royal Gibraltar Post Office which suggests to me that their stamps have such a small following in Britain now that it's not worth them forking out the cost of a stand. The Isle Of Man stand had very few items for sale - all the effort seemed to be being put in to the sale of a pack containing the recent Masonic Lodge stamps along with a "Smilers" sheet which contains Royal Mail and not Manx stamps. The price being asked for this item was £45 which the sales assistant thought to be good value especially as it included a "free" booklet. I regret to say that I do not share his sentiments about what seems to me to be a rather expensive item, "free" booklet or not. The counter assistant did say that the pack had been selling well and that may be so - one was sold while I was standing at the counter. Perhaps it's the use of Royal Mail stamps in the sheetlet that was attracting attention.

I didn't stay long at what seems to me to be an antediluvian affair which is called Autumn Stampex. I'm sure even we grey-haired shuffling old men deserve something rather more imaginative and exciting than this especially if we're travelling a long way to go to it. Unless someone brings it and other stamp exhibitions in Britain into the 21st century British stamp collecting will die with us. Perhaps next year there could just be a Spring Stampex and we could be spared a second one of the year.

🇬🇮 New Post and Go items launched at Autumn Stampex 2017 are dispensed by Royal Gibraltar Post Office kiosk GI01. There is a strip of 6 new designs which commemorate various anniversaries related to Freemasonry. The featured events include the Centenary of the United Services Lodge Gibraltar and the Tercentenary of the United Grand Lodge of England.
It's quite an attractive collection of stamp designs but of course none of the stamps dispensed from GI01 are postally valid in The United Kingdom so they will have to be carted off to Gibraltar itself for use on real mail. I presume these same designs will become available in Gibraltar from kiosks GI02 and GI03 situated in the Main Post Office and Parcel Office there. Rating:- *. 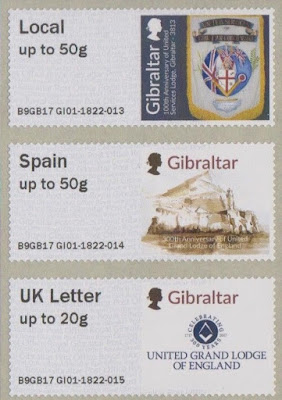 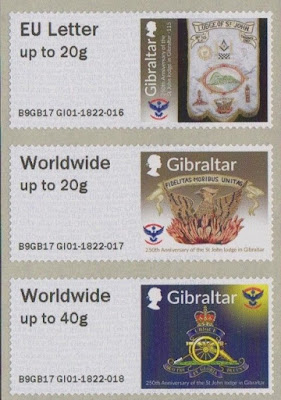 Also being dispensed from GI01 are the "Year of the Rooster" labels (in 6 different values) with the added inscription "Autumn Stampex 2017". Rating:- 0.

Meanwhile, in addition to the Royal Mail Post and Go "Mail By Air" stamps mentioned in previous Blogs, kiosk A014 is dispensing the "Poppy" stamp with an additional inscription - "WWI Battle of/Passchendaele". The date code is MA15. Rating:- 0.

The "Machin 50th Anniversary" labels are also being sold with additional inscriptions- "Autumn Stampex 2017". These are dispensed by kiosk A012 and A013. Rating:- 0. 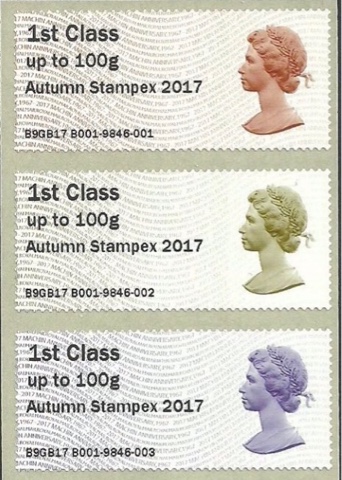 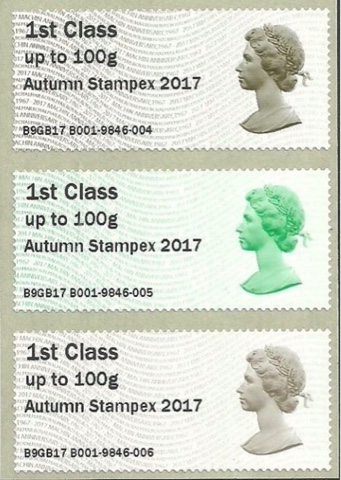