🇳🇿 New Zealand Post has finally gone too far with its new stamp issue programme. It plans to issue a set of 6 stamps and 1 miniature sheet on 4 October 2017 on the subject of "Sustainable Food" which is a worthwhile enough subject for a new issue I suppose. But some clever person came up with the idea of attaching seeds to each stamp which could then be planted to grow real food products from them. This isn't a particularly original idea - we've already seen similar stamps being sold by the Trinidad And Tobago postal service.
However, New Zealand Post has discovered that stamps being sent abroad can not have live seeds attached to them. Much head scratching ensued. Finally someone came up with the idea that there would be 2 versions of the stamps - one type to be sold in New Zealand only with seeds attached and the other type to be sold abroad without any seeds attached to them. Thus collectors in New Zealand will have 12 new stamps and 2 miniature sheets to buy and collectors anywhere else in the world will only be able to obtain 6 stamps and 1 miniature sheet. You can not help but think that this is opening the door to stamp smuggling - desperate overseas collectors trying to smuggle a set of stamps with seeds attached out of New Zealand without Customs officers noticing. Anything to declare? Yes, a set of stamps.
This issue was designed by Hannah Stancliffe-White and lithographed by Southern Colour Print and perforated14.5 while the miniature sheet is perforated 14.5 x 14. Rating:- 0.

🇬🇬 Guernsey Post has released the design of one of the stamps from an upcoming set of 6 which will be issued on 8 November 2017 to commemorate the Centenary of the First World War. The total face value of the set will amount to £4.06p and there will be an accompanying Prestige Booklet which will be sold for £16.24p. I shall add the basic set to my collection but keep the price of the booklet firmly in my wallet. Rating:- ***. 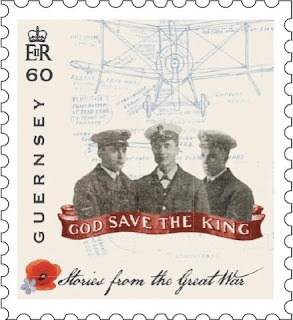 🇬🇧 Autumn brings the political party Conference season with it here in Britain so Post and Go stamp collectors will need to look out for issues dispensed from kiosks sited at the various conferences as happened in 2016.
The Liberal Democratic Party met at Bournemouth from 16 to 19 September but I have not yet seen any news that any Post and Go stamps were sold at the Conference just as there were no such items in 2016.
The Scottish Nationalist Party will meet at Glasgow from 8 to 10 October. Stamps were dispensed at last year's conference so we might expect similar stamps with the additional inscription "Glasgow" again this year.
The Labour Party will meet at Brighton from 24 to 27 September so look out for Post and Go stamps with additional inscription "Brighton".
The Conservative Party will meet in Manchester from 1 to 4 October and so one might expect Post and Go stamps with additional inscription "Manchester" being sold there during the Conference.

🇦🇮🇻🇬🇦🇬🇩🇲🇲🇸 Several Commonwealth territories have suffered terribly from the effects of the various hurricanes which have swept across the Leeward Islands recently. Affected to varying degrees have been Antigua And Barbuda, Anguilla, British Virgin Islands, Dominica and Montserrat. There have been a number of deaths and, on some of the islands, an incredibly large amount of destruction and devastation but from a philatelic point of view there has of course been severe postal disruption and probably destruction of post offices and loss of stamp stock. Doubtless stamp collectors will notice philatelic consequences in the coming months.