🇿🇦. The South African Post Office issued a miniature sheet containing a single stamp on 26 September 2017 to commemorate the former wife of the late Nelson Mandela, Winnie Mandikizela-Mandela. She and Mandela divorced 2 years after his release from prison and in 2003 she was convicted of 43 counts of fraud and 25 counts of theft though on appeal the convictions for theft were overturned but she was given a three and half year suspended prison sentence for fraud.
She had previously been sentenced to six years imprisonment in 1991 for kidnapping but the sentence was reduced to a fine on appeal.
South Africa's Truth and Reconciliation Commission concluded in 1998 that "Ms Winnie Mandikizela-Mandela (was) politically and morally accountable for the gross violations of human rights committed by the MUFC" and that she ""was responsible, by omission, for the commission of gross violations of human rights"
Clearly she is a worthy subject for philatelic commemoration! The sheer inappropriateness of the subject makes this an interesting issue and gives an interesting insight into the relationship of politics and philately in some countries. Rating:- ***. 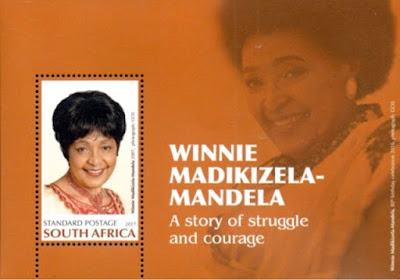 🇯🇪 Illustrated below is one of the 6 "Jersey Crest" Post and Go stamps released by Jersey Post and mentioned in Blog 1075 which are being dispensed by Kiosk JE02 situated in the Broad Street post office in St Helier from 18 September to 16 October 2017 to commemorate the Super League Triathlon. The stamp has the additional inscription "Super League/Triathlon 2017". Rating:- **.

🇬🇧 In his Norvic Philatelics Blog of 26 June 2017 Ian Billings highlighted Post and Go stamps which were being sold from IAR kiosk M007 located at Royal Mail Headquarters at 100 Victoria Embankment in London. The 1st and 2nd Class "Machin Head" stamps have the additional inscription "Royal Mail HQ" and there is limited public accessibility to the kiosk. Several sellers are currently offering these items on E Bay and I illustrate an example of each below:- 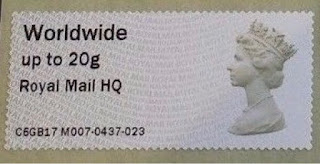 🇬🇬 Guernsey Post will issue 6 stamps on 8 November 2017 as its fourth set commemorating the Centenary of the First World War. The issue will, almost inevitably, be accompanied by a "Prestige booklet".
This is an interesting, well-researched issue featuring Guernsey's links to the aerial war but, as is happening more and more, is made up of very drab stamps. Rating:- ***.

🇧🇳 Worth noting is the date of 4 October 2017 which is the day when The Sultan of Brunei Darussalam will celebrate his golden jubilee. This anniversary is bound to be associated with a stamp issue including, I suspect, a $50 miniature sheet if previous form is anything to go by. No news yet, that I have seen, of the expected philatelic commemoration but I suppose it will not be too long before we discover how the Brunei postal service will be celebrating this notable national anniversary.